FAYETTEVILLE, Ark. — The fall armyworms surging through Arkansas pastures and lawns apparently don’t understand the concept of a killing freeze. 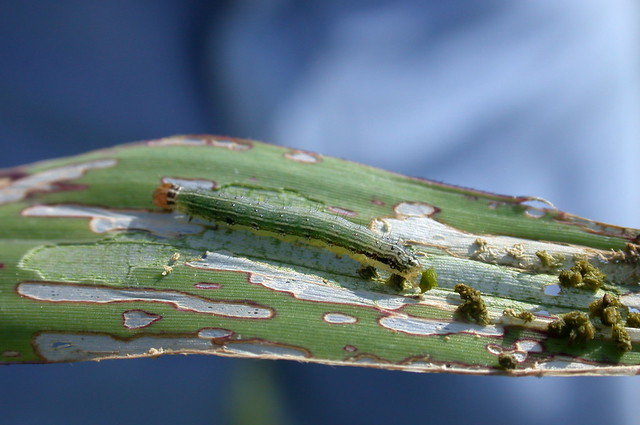 Like the old saw, this army travels on its stomach, and searches for tender plants to eat. The armyworms can often render a lush pasture nearly barren in a day.

Numbers have been increasing each week for the last 2 1/2-3 weeks. Fall armyworm catches have been highest in the following:

The deep freeze that took over much of Arkansas, Texas and other parts of the South back in February should’ve put the kibosh on fall armyworms.

“Armyworms overwinter as adults in south Texas,” Loftin said. “If we look at the temperatures we had in February, we would’ve expected more winter mortality.”

"Because of the extended rains during the spring, many ranchers had both quantity and quality issues in their first cutting of hay, making it all the more imperative to protect what’s left in meadows and pastures, for future grazing or cutting,” he said.

John Jennings, professor and extension forage specialist for the Division of Agriculture, said lots of infestations are being reported.

“Often the armyworm moths are attracted to the most tender growing forage, so new growth on recently cut hay fields, well-managed pastures and newly planted summer forages like millet, sorghum/sudan, and crabgrass are at greatest risk,” he said.

Damage from small armyworms often shows up as light-colored grass tips similar to frost or as small patches of green tissue missing from the leaf surface called windowpane feeding. Damage from larger worms is more obvious with leaves and young stems being eaten.

“Producers should scout all fields closely with in-field observations and not from the pickup windshield,” Jennings said.

Download the fact sheets: “Managing Armyworms in Pastures and Fields,” https://www.uaex.edu/publications/pdf/FSA-7083.pdf and “Fall Armyworm Recognition and Management” at https://bit.ly/3wFGKen.