By Mary Hightower
U of A System Division of Agriculture:

Four states — Mississippi, Alabama, Texas and Arkansas — produce 97 percent of catfish sales in the United States. U.S. catfish sales were $371 million during 2020, down 2 percent from $380 million the previous year. 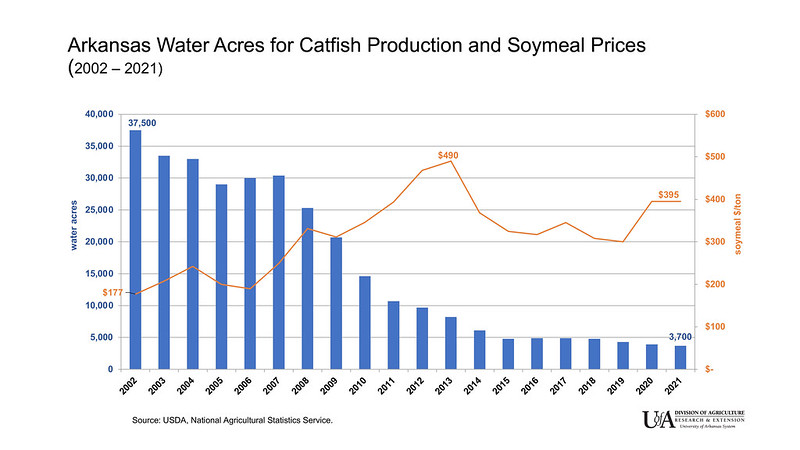 DRYING UP — Arkansas catfish pond acres are drying up, in part because of a bump in the price of soy meal. (Division of Agriculture graphic.)

Arkansas is No. 3 behind Mississippi and Alabama in foodsize inventory as of July 1, according to the National Agricultural Statistics Service, part of the U.S. Department of Agriculture.  “Foodsize” is defined as fish that are 0.75 to heavier than three pounds. The same report showed Arkansas had 9.5 million stocker fish, up 2 percent from a year ago.

“By 2021, the industry is one-tenth that size, at just 3,700 acres,” said Scott Stiles, extension economist for the University of Arkansas System Division of Agriculture.

Stiles said that catfish feed prices are largely driven by grain prices. What the catfish industry refers to as “32 percent feed” typically contains 30 to 44 percent soybean meal and 15 to 20 percent corn.

And the grain market news was only getting worse for catfish growers.

“For 2021, average soybean meal prices are projected to be the highest since 2013 at $395 per ton,” he said. “When feed costs are at high levels, growers may switch to a 28 percent feed to reduce costs. However, that option is still expensive as growers report paying $482 per ton in the past week for floating feed.”

If there is a bright spot for producers, it’s fish prices.

“Fortunately, catfish prices are slightly better than last year’s average of $1.06 per pound,” Stiles said. “Current farm-level prices are in the range of $1.25 to $1.30 per pound.”

With August being a key yield-determining month for U.S. soybeans, some continued price volatility can be expected.

\The University of Arkansas System Division of Agriculture offers all its Extension and Research programs and services without regard to race, color, sex, gender identity, sexual orientation, national origin, religion, age, disability, marital or veteran status, genetic information, or any other legally protected status, and is an Affirmative Action/Equal Opportunity Employer.