LITTLE ROCK — With harvest about two months away for Arkansas soybeans, both the cash and book markets for the crop are well into double-digit dollars, with markets closing Friday as high as $14.31/bu. for cash crops and $13.51/bu. for booked. The question now, is: Who will be able to take full advantage of it? 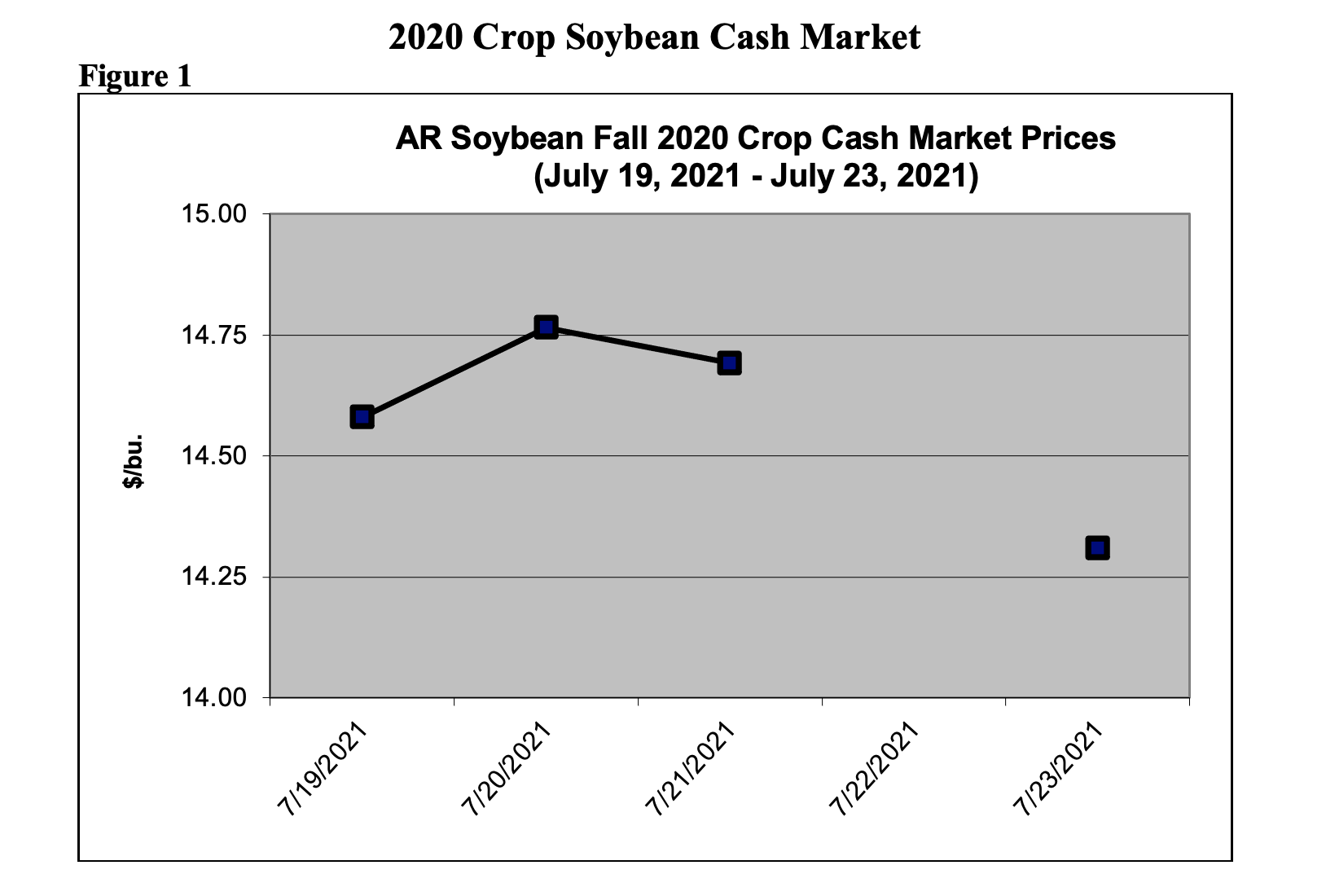 STRONG MARKET — With harvest about two months away for Arkansas soybeans, both the cash and book markets for the crop are well into double-digit dollars, with markets closing Friday as high as $14.31/bu. for cash crops and $13.51/bu. for booked. The question now, is: Who will be able to take full advantage of it? (Division of Agriculture graph.)

Robert Stark, agricultural economist for the University of Arkansas System Division of Agriculture, said that a combination of rising demand — much of it from China — and reduced supply has helped bring the price up after a brief dip at the end of June.

“There are some key elements driving the market,” Stark said. “The first is the amount of stocks we have on hand. In the March 31 stocks report from the U.S. Department of Agriculture, they indicated we were down 31 percent in soybean stock versus 2020 — down to 1.56 million bushels. At the end of June, we were down 44 percent from the year before, to 767 million bushels of stocks on hand.

“That’s putting a lot of volatility and concern into the market,” he said.

“A second issue coming into play is drought conditions in North Dakota, South Dakota and Minnesota,” he said. “The drought is affecting both the corn and bean crops they have in that area. Their crop has the potential to take a hit to their yield.”

Against both global and national backdrops, growers in Arkansas, who planted more than 3 million acres of soybeans in 2021, have faced their own challenges. Among them, the historic flooding event in the first week of June that destroyed tens of thousands of soybean acres in southeastern Arkansas.

Jeremy Ross, extension soybean agronomist for the Division of Agriculture, said that while many of those acres have been replanted — again in soybeans — growers will certainly face a significant decrease in yield potential, given the event’s late date in the growing season.

“A lot of those beans down there were already in reproduction,” Ross said. “So those guys lost from two to two-and-a-half months of growing, and just had to start over.

“At this point, the best you can hope for with that sort of situation is about 50 percent of maximum yield,” he said. “And the way temperatures and the long-term forecast is looking, we’re probably going to be hot and dry from here on out, which isn’t ideal for soybean development and growth.”

After more than seven years of debate, decision and reversals, the use of dicamba continues to be controversial. The Division of Agriculture has estimated that about 650,000 acres of non-tolerant soybeans were showing symptoms of dicamba exposure. Ross said the ultimate impact of those instances on total production remains to be seen.

“There are a lot of factors, including what growth stage the beans were at when the event occurred; is it multiple events or just a single event; growing conditions afterward — it’s just a whole host of different things,” Ross said. “It’s impossible to know how much yield decline there will be at this point, and how much if any of that decline will be due to dicamba. We won’t know until the combines roll through the fields.”

Arkansas soybean growers were also facing increasing pressure from armyworms. Earlier this week, Gus Lorenz, extension entomologist for the Division of Agriculture, said “this is the biggest outbreak of fall armyworm situation that I’ve ever seen in my career. They’re in pastures, rice, soybeans, grain sorghum. It’s epic.”  (See: https://bit.ly/3eEPNpJ and https://bit.ly/3kRfhV4).

Ross said that in the final week of July and throughout August, irrigation will likely be essential for most soybean producers throughout the state, particularly those who have had to replant.