LONOKE, Ark. — University of Arkansas System Division of Agriculture entomologists are seeking an emergency exemption to allow for the use of Intrepid to help control armyworms that threaten the state’s 1.24 million acres of rice.

“This is the biggest outbreak of fall armyworm situation that I’ve ever seen in my career,” Gus Lorenz, extension entomologist for the Division of Agriculture, said Wednesday. “They’re in pastures, rice, soybeans, grain sorghum. It’s epic.” 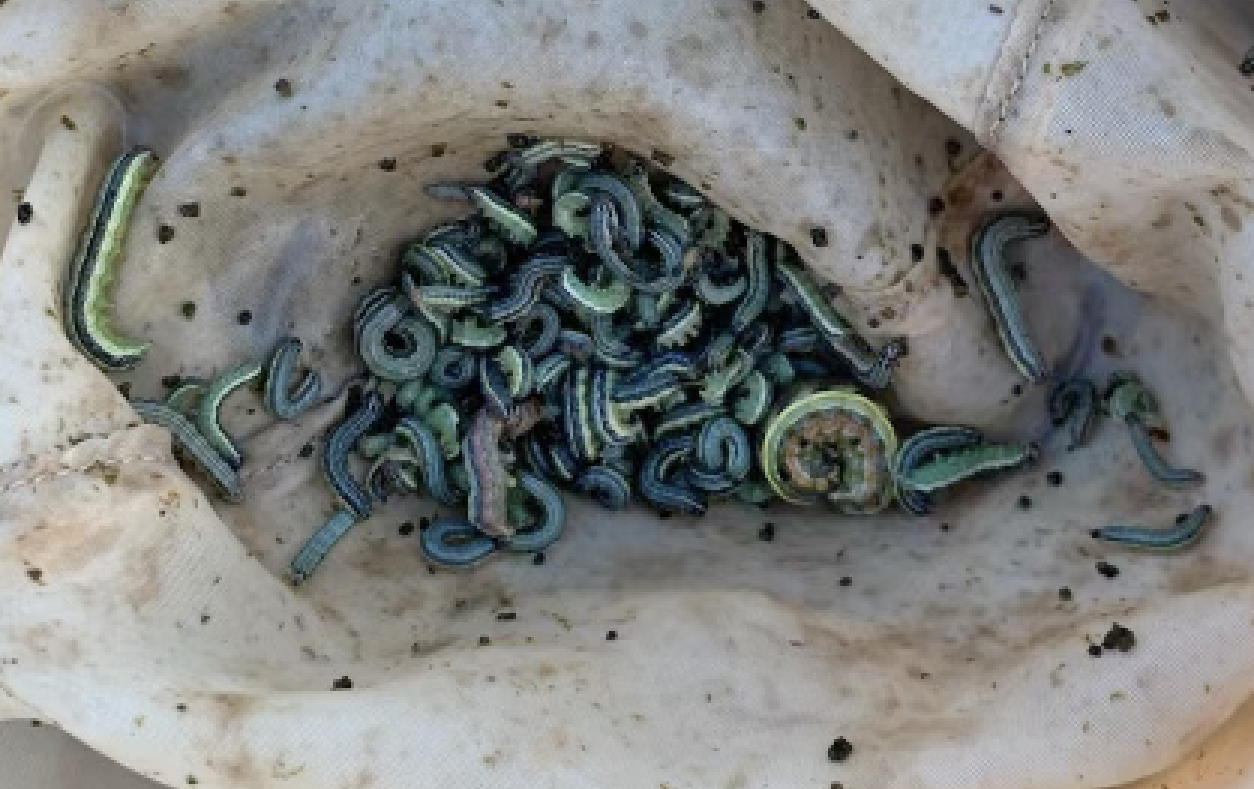 SWARMED — Sweep net full of armyworms. Taken July 21, 2021. (U of A System Division of Agriculture image by Gus Lorenz)

Lorenz said the Section 18 request to enable use of Intrepid should be submitted to the Arkansas State Plant Board by Friday.

Intrepid is a growth regulator that’s approved for use in just about every other row crop but is not labeled for use in rice.

“This armyworm thing started about three to four weeks ago,” he said. “It’s continued to build from that time. It’s from the Bootheel of Missouri down to Louisiana.”

“Fall armyworm is a particularly voracious caterpillar,” said Jarrod Hardke, extension rice agronomist for the Division of Agriculture. “They have a tendency to surprise us because adults lay very large egg masses but the earliest instar larvae eat very little. It’s not until they get older and start to spread out that they consume most of the food in their life cycle.

“This is why we go from zero to TREAT seemingly overnight,” Hardke said.

Typically, armyworms can be managed well using pyrethroids, but Lorenz said “when this outbreak first started, we got reports out of Texas and Louisiana that they weren’t getting control. We’re getting failures.”

Lorenz said he and colleagues ran some quick tests, spraying this year’s armyworms with pyrethroids “and we got 48 percent control.”

In cattle-heavy parts of the state producers use another insect growth regulator called Dimilin to manage armyworms, but in row crop country, “they just don’t carry it. It’s just not available,” Lorenz said.

“We’re limited on the options in control for rice,” he said. “It’s not just a problem of row rice. We are also seeing them in flooded rice, all through the field. They are eating rice all the way down to the waterline.”

Lorenz said rice growers in California sought and received a Section 18 exemptions over the last three years. “We felt like that was our best option.”

Arkansas farmers who managed to replant after the floods and heavy rain in June have young, tender plants that are highly attractive to armyworms.

“Those crops are extremely susceptible to damage from armyworms,” Lorenz said.

“My concern is that if we get another generation of them, the next wave could be unbelievable,” he said.

The first generation of armyworms matured into moths in Texas and Louisiana and flew northward. Now that they’re in Arkansas, “We’re making our own generation, which is what makes it so dangerous,” Lorenz said.

There’s also a chance that, depending on the environment, “the population could collapse,” he said. “There are some natural controls out there. When you get a big buildup a lot of things can happen. There are a lot of naturally occurring pathogens that can help control them.”

Some agents in southwest Arkansas found armyworms that had fallen victim to a naturally occurring virus. Lorenz is hoping that virus may provide another option for control in the future.

Use of product names does not imply endorsement.