DOVER, Ark. — After the February storms that locked Arkansas in record snowfall and sub-zero temperatures, Kenny Drewry is considering a few changes on his farm. 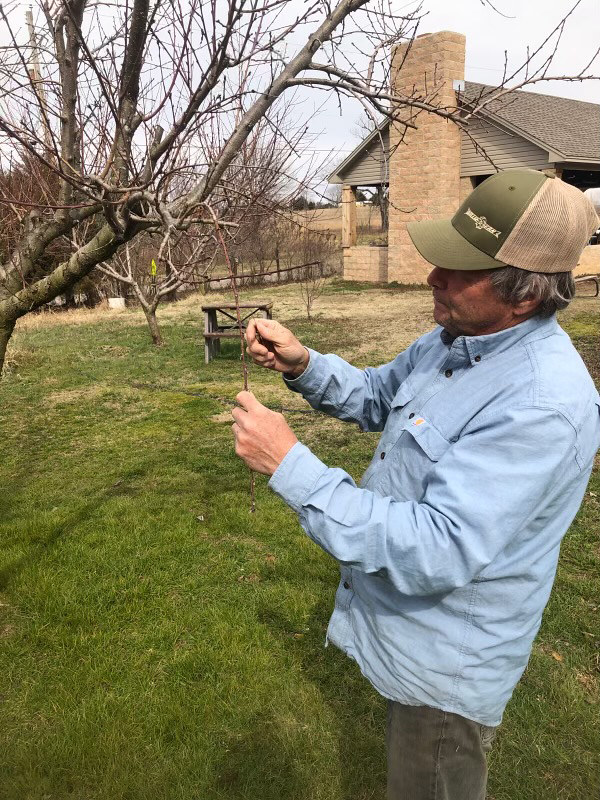 ASSESSING THE DAMAGE -- Kenny Drewry of Drewry Farm and Orchard in Dover, Arkansas, examining his fruit trees for damage caused by the record cold and snowfall in February. Image taken Feb. 25, 2021. (U of A System Division of Agriculture photo by Phil Sims.)

He has hundreds of peach trees of various varieties; each covered with buds. Those buds are key to the delicious fruit that people drive for miles to buy.

“It’s very difficult to tell how many are alive,” Drewry said Thursday. “Those temps went to below where it would take to kill them.”

In his initial survey in parts of the peach orchard, “we could find a peach bud every now and then. If I found a limb that might have 100 buds on it, you might find one or two alive.”

He said he would be surveying his crops every two weeks to get a better feel for what survived and what didn’t.

A regular part of peach production is thinning to ensure some fruit can get the full benefit of the tree’s nutrients and grow to their full potential. Sometimes this is done through pruning in late winter or by reducing the fruit load in spring.

“You only need about 5 percent to make a crop,” Drewry said. After the freeze left him with only 1 or 2 percent buds at best, he joked that, “really, I’d rather do my own thinning.”

Expecting a reduction in peach yield, he said he’s looking at other options to compensate.

“We plant watermelons and other produce every year. We’ll plant more of those,” Drewry said. Another route is increasing the number of apple trees. Apples bloom later than peaches, which is a huge advantage to dodging freeze damage.

“You have a freeze that will take your peaches out and your apples will be so dormant that they will make it OK,” Drewry said, adding that his expanding apple orchard would include Arkansas Black apples, Fuji Supreme and DeRosa apples.

“You will have a crop of apples when you don’t have peaches,” he said.

However, damage assessment isn’t simply a one-and-done exercise. It will require monitoring for weeks to come, said Amanda McWhirt, extension specialist-horticulture crops for the University of Arkansas System Division of Agriculture. For tips on assessing fruit crops, visit http://bit.ly/2O7rq9K.

McWhirt said that while many crops were still dormant when the low temperatures came, some buds were beginning to swell on some blueberries, peaches and blackberries. McWhirt, along with agents in Benton, Sebastian, Crawford, Green, Franklin and White counties along with personnel at the Southwest Research and Extension Center in Hope, conducted a wide-ranging survey of cold damage to fruit crops.

Peach damage in the survey found bud damage ranged from zero to 100 percent, depending on location.

“Some later cultivars did not show damage at locations where temperatures only got to just below zero degrees Fahrenheit,” McWhirt said. “Other locations where the lows reached minus 20 degrees had close to 100 percent damage to buds that were examined.”

Blackberries that broke bud saw very high rates of injury. None to minor damage was observed in buds of Ponca and Ouachita variety blackberries. However, McWhirt said, “I don’t think this means that they survived without any damage and we will continue  to monitor in the coming weeks.”

There was still a possibility that secondary buds might still produce fruit on some plants.

For strawberries in the observed location, snow may have been a saving grace. The surveyors found little or no damage to strawberry crowns.

“The snow cover likely saved much of the strawberry crop as it now stands,” McWhirt said. “Emerged buds and blooms did show damage and will be lost but the plant crowns were saved.”

McWhirt said northern highbush blueberries showed no damage, but that some southern highbush types showed severe damage. Damage in rabbiteye types ranged from minor to severe, depending on the location.

A small sample of table grapes showed no damage, but she said table grape vines will be monitored.

Muscadine were likely to have been damaged by the freeze, but “it’s hard to assess damage on muscadine because the vascular system is more sensitive than the buds,” McWhirt said. In the wake of the damaging freeze, when the buds break in the spring, they will likely wither and die.