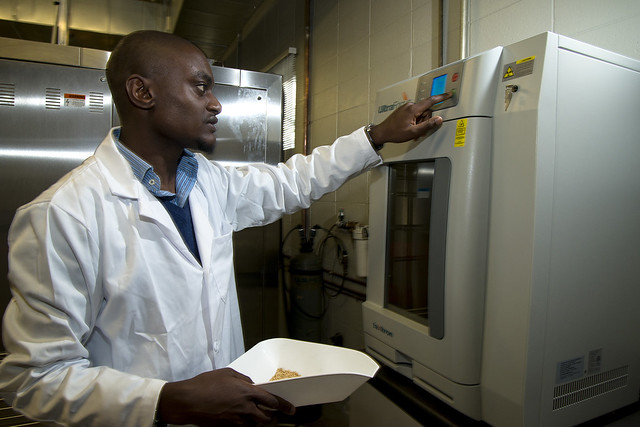 X-RAY EXAM — Zephania Odek uses an x-ray system to identify fissures in rice kernels before milling. Odek recently completed his doctoral degree from the University of Arkansas after conducting graduate research in the Rice Processing Program of the Arkansas Agricultural Experiment Station. (U of A System Division of Agriculture file photo by Fred Miller)

Decades of research by scientists in the experiment station’s Rice Processing Program led researchers to hypothesize that uneven moisture content in the kernels during drying causes fissures that crack and break during milling. Research has shown that three or more fissures significantly reduce rice kernels’ commercial value, said Griffiths Atungulu, associate professor of grain processing and post-harvest system engineering for the Agricultural Experiment Station research arm of the University of Arkansas System Division of Agriculture.

Atungulu is the interim director of the Rice Processing Program, founded in 1994 by the late Terry Siebenmorgen, Distinguished Professor and world-renowned rice processing engineer.

Arkansas is the nation’s leading rice producer, growing about half the rice grown in the U.S. for both domestic and export markets, according to the Arkansas Agriculture Profile 2020, a Division of Agriculture Pocket Facts publication available online: https://bit.ly/AAES-AgProfile2020).

According to the publication, rice contributes about $1 billion to Arkansas’ agricultural economy in cash farm receipts.

The milled white rice consumers purchase in groceries or restaurants is the endosperm of the rice kernel. The endosperm's hard, glossy texture is known as the glassy state. Research by Siebenmorgen and other program scientists suggested that during drying, the material state of the endosperm changes to a softer, flexible condition called the rubbery state as the rice is heated to reduce harvest moisture content. As moisture content moves out of the kernels, the endosperm transitions back to a glassy state.

“The moisture does not move out evenly,” Atungulu said. “Moisture at the surface of kernels leaves more quickly than moisture in the core or in the middle area between the core and surface.” The temperature may also vary between these parts of the kernels during drying, he said.

This zone between areas of glassy and rubbery states is known as the glass transition line, or band, Atungulu said. The difference in temperature and moisture content on either side of that band can cause the kernels’ surface to transition from rubbery state back to glassy state while the core remains in the rubbery state.

This was known as the glass transition state hypothesis, Atungulu said. The difference in material state on either side of that glass transition band causes stresses that produce internal fractures — known as fissures — resulting in broken kernels during milling.

In research supported by the Arkansas Rice Research and Promotion Board, Zephania Odek, a recent graduate of the University of Arkansas, verified the glass transition phase hypothesis by x-ray analysis of rice kernels. Odek conducted this research at the Agricultural Experiment Station for his doctoral thesis research.

Odek subjected rough rice to varying drying temperatures and strategies and used x-ray imaging to detect fissures in the kernels. His results demonstrated that the glass transition phase hypothesis was correct and accurately described what was taking place during drying. His research also verified the solution to this drying conundrum that experiment station researchers had tested and that the rice processing industry had already adopted.

To accomplish this, Atungulu said, rice drying is done in stages. Typical rice drying practice is to flow heated air through flowing columns of rough rice kernels. To avoid glass transition phase stresses, and depending on harvest moisture content, the rice is dried in about four stages separated by periods of tempering. During tempering, the rice is at rest but maintained at drying temperature.

“In each stage, the moisture content is reduced only a few percentage points,” Atungulu said. “During tempering, moisture has time to move from the core toward the surface. It becomes homogenous, and that keeps the entire kernel in a single state.”

The goal is to move the entire kernel from the rubbery state back to the glassy state at the same time. Tempering avoids the stresses that cause fissures in the endosperm.

Several factors influence the cycle, including environmental conditions during harvest and the rice’s initial moisture content when it arrives at the dryer.

“Zeph’s research, and all the earlier research that led up to it, is Dr. Siebenmorgen’s legacy,” Atungulu said. “He focused on the need for rice processing research to benefit one of Arkansas’ leading industries.

“Since founding the Rice Processing Program, Dr. Siebenmorgen not only did groundbreaking research but also mentored the scientists, staff and students who joined the program,” Atungulu said.