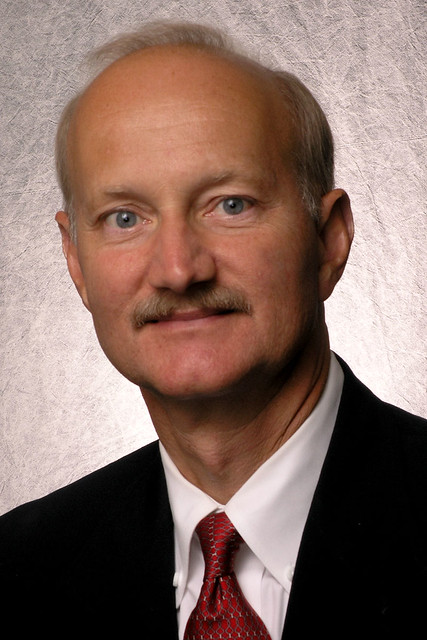 Bacon retired Jan. 8 after 37 years, the last 15 years as head of the department of crop, soil and environmental sciences for the Division of Agriculture and the Dale Bumpers College of Agricultural, Food and Life Sciences at the U of A.

He earned his bachelor’s and master’s degrees from the U of A, then earned his doctoral degree in agronomy, specializing in crop breeding, at Purdue University. With his Ph.D. in hand, Bacon came home to Arkansas.

In addition to breeding wheat, oats and canola, Bacon carried a heavy teaching load in Bumpers College, and he found his association with his students as rewarding as his research.

Bacon expresses a sense of pride on those occasions when he’d encounter former students at a conference and see how successful they’d become in their field. But he said students also became a measure of when to move on.

“When I began to see the children of my former students in class,” Bacon said with a grin, “that’s when I began to think about retiring.”

“Robert served the department and the state during a time when Arkansas was growing a million acres of wheat,” Slaton said. “And as a researcher, and later as department head, he has seen the department evolve and adapt with the changes in Arkansas agriculture over 37 years.”

The academic program has grown since Bacon became department head, Slaton said. “The undergraduate program is larger now,” he said. “I attribute that to Robert’s leadership in curriculum development and priorities in faculty hires.”

Bacon said the department has become more diverse over the years, in more ways than one.

“It was the department of agronomy when I began,” he said, “and it was all men then. Karen Moldenhauer (rice breeder at the division’s Rice Research and Extension Center) was the only woman.” He said the department has changed with the times to become more diverse in gender and ethnicity.

“When I started, all the soil science was related to crop production,” Bacon said. “Today, environmental sciences have become more important in relation to agriculture. It was always on my mind that I wanted our research and teaching programs to remain relevant.”

Looking back over his 37-year career, Bacon can see dramatic changes in technology. “One thing that strikes me now is that I can remember when no one had a computer. John Gilmore (a former faculty member) told me, ‘You should really get a computer.’ And I was like, why? If I need a computer there’s one in the computer lab.”

Since retiring, Bacon said he has been adjusting to not living by a clock. He and his wife, Dian, intend to continue living in Fayetteville. “It’s home to us,” he said.

Slaton said a national search is planned for a new department head for crop, soil and environmental sciences. “We’re looking at 12 to 18 months to execute the search,” he said.

In the meantime, Slaton is developing a strategic hiring plan to fill research and teaching faculty positions left vacant by recent retirements.