FAYETTEVILLE, Ark. — Andy Proctor, university professor emeritus with the Arkansas Agricultural Experiment Station and Dale Bumpers College of Agricultural, Food and Life Science's department of food science, has been appointed to a visiting professor position at the University of Suffolk in the United Kingdom. 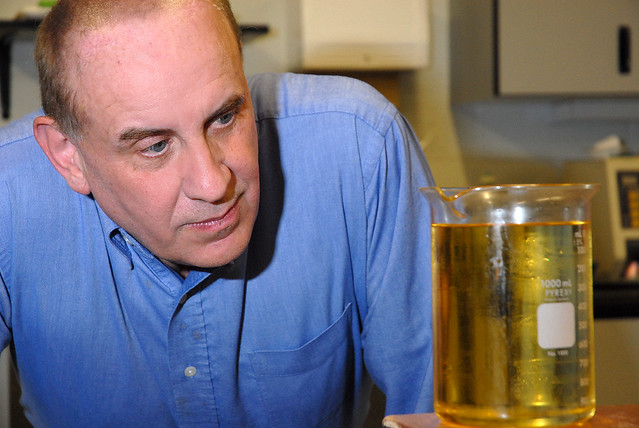 INTERNATIONAL — Emeritus food science professor Andy Proctor patented a process that uses intense UV light to enhance cooking oil with conjugated lineolic acid, providing nutritional benefits. He began an appointment as visiting professor at the University of Suffolk in Oct. 2020. He will coordinate new international academic programs between the United Kingdom, European Union and the United States. (U of A System Division of Agriculture file photo by Fred Miller)

His appointment with the University of Suffolk's School of Engineering, Arts, Science and Technology began in October and runs through September 2023.

"I anticipate assisting in developing the new food science program and creating new international transatlantic and European research and educational experiences," said Proctor. "Hopefully we can develop new opportunities for U of A and Bumpers College to gain international academic and professional experiences in food, health and ag business in Suffolk, which has major food and agriculture sectors."

He taught lipid chemistry and U.S. food law, and conducted research in lipid chemistry and agricultural co-products utilization. His later lipid chemistry research focused on increasing the nutritional value of vegetable oils by enhancing conjugated linoleic acid levels in oil by catalysis. Proctor has three patents on this novel technology. He also developed technology for extraction of silicate and carbon from rice hull ash, which was commercialized by the rice industry.

Proctor has more than 120 peer reviewed publications and for 20 years served as either associate editor or senior associate editor for the Journal of America Oil Chemists' Society. In 2015, Proctor was the Fulbright-Austria Visiting Professor in Natural Sciences at the Institute of Chemistry at the University of Graz, Austria. He is a Fellow of both the Royal Society of Chemistry and the American Oil Chemists' Society.

Proctor has been active in nurturing European Union-U.S. international programs by serving as U.S. director of two inter-disciplinary E.U.-U.S. Atlantis Programs in "biorenewables and green technology" funded by the U.S. Department of Education (2004-09) (2008-13). He facilitated student exchanges and international short courses with colleagues at Austrian, Belgian, French and U.S. universities, a partnership that continues today. He also served as director of Bumpers College's international programs.

About the Dale Bumpers College of Agricultural, Food and Life Sciences: