FAYETTEVILLE, Ark. — Agriculture would not be the same today without the life of W.C. “Bill” Yearian Jr., the former University of Arkansas System Division of Agriculture entomology professor and department head who pioneered research on pest management and guided many graduate students to success. 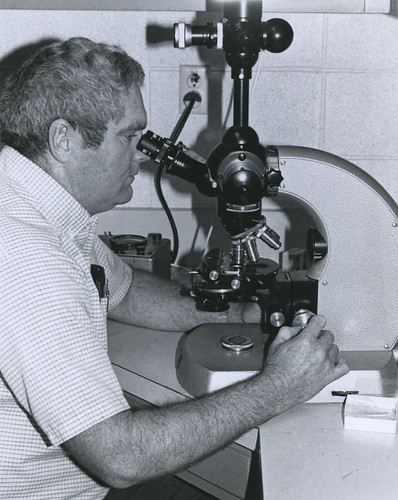 YEARIAN'S LEGACY —  W.C. "Bill" Yearian Jr. is pictured in 1987 as an entomology professor at the University of Arkansas. He is remembered for his research on non-chemical agricultural pest management and guidance of a generation of entomologists.  (Division of Agriculture photo)

The Lake Village native died on Dec. 7 in Fayetteville at the age of 84.

Friends and colleagues remember Yearian as a hard-working and selfless scientist who preferred to share credit for achievements and encourage greatness in others to strengthen the Division of Agriculture’s entomology department.

“He was larger than life,” said Don Steinkraus, professor of entomology and plant pathology for the Arkansas Agricultural Experiment Station, the research arm of the Division of Agriculture. “He was a tireless worker with unbounded energy, and that could make it difficult for anyone who didn’t have as much energy as him.”

Both Steinkraus and Tim Kring, University of Arkansas entomology professor emeritus and current Virginia Tech University entomology professor and department head, mentioned Yearian’s work on nuclear polyhedrosis viruses as having an impact on non-chemical agricultural pest management. The method was widely adopted in Central and South America and is still used in many locations as a key component of sustainable farming in those regions of the world, added Kring, who conducted entomology research for the experiment station.

“His work demonstrated the incredible efficacy of these viruses, their limitations, and their potential, and was instrumental in promoting a highly applied approach to their use in agricultural systems,” Kring said. “It is interesting that researchers, government, and industry leaders are now rediscovering the potential in these baculoviruses.”

Kring also said that Yearian was a leader through team building and almost never worked alone.

“Professionally, that means his CV was filled with co-authored papers, with him rarely taking the first-author position even though it was almost always warranted. Many of his co-authors, myself included, have enjoyed wonderful careers based on the foundation Dr. Yearian built with us,” Kring wrote. “Our discoveries in science were his!”

Yearian’s research focused on many insect species in dozens of agricultural systems over his career, Kring said. When U.S. Sen. Dale Bumpers led a push for the University of Arkansas to develop a cohesive research effort for environmentally friendly approaches to pest control, Yearian stepped up. He brought the writings of many scientists together to help build support for what became the Arkansas Agricultural Experiment Station’s Rosen Alternative Pest Control Center, a federally funded center within the Division of Agriculture.

“Bill was the person that brought these often narrowly-individual scientific efforts into a common language that he knew was essential for Sen. Bumpers to be able to gain support for this effort,” Kring wrote. “He crafted that first document. Characteristically, Bill’s name only appears among those of all the scientists in the center and does not appear even as one of the team leaders.”

Entomology research records may show Yearian’s work beneficial work on biocontrol for cotton and soybeans, but some of his most impactful work was with his students.

Gus Lorenz, distinguished professor and extension entomologist with the University of Arkansas System Division of Agriculture, was one of those students mentored by Yearian.

“He was the real thing,” Lorenz said. “You always looked up to Dr. Yearian. He was a mentor to me. He was a taskmaster, and he took pride in the fact that he could outwork pretty much anybody. But he always made time to go fishing.”

Lorenz said Yearian could push students to finish their work without being overbearing. If Yearian liked you as a student, you might end up doing more work than others because he saw potential in you to become better than you expected, Lorenz said.

“He was a good teacher,” Lorenz said. “He made learning fun. We would cook grasshoppers and bollworms to eat in class, but he expected you to learn. All that I learned from him really helped me in my career. Whatever success I’ve had was due to his influence.”

Kring credited Yearian as a department head for instilling an emphasis in faculty to actively train entomology graduate students while also bringing students together.

“He treated them as scientists from day one,” Kring said of his students. “Bill showed every student respect and gained theirs.”

Kring said he has spoken to many of Yearian’s former colleagues and students in the past two weeks since his passing. The commonality of their words echoes the thoughts of Steinkraus and Lorenz. Paraphrasing the sentiments of those he spoke with, Kring offered these common quotes:

That last one comes directly from Kring, who said Yearian was “an acquired taste, much like the Old Style beer and Scotch whisky they brought with them on fishing trips.

Yearian served the University of Arkansas as an instructor and a cotton, soybean, and bark beetle researcher for 37 years. He also served on the Arkansas Plant Board, Boll Weevil Eradication Board, and as state chapter president of Gamma Sigma Delta, the honor society of agriculture, from 1979-1980. He became head of the university’s entomology department in 1989 and stayed in that position until his retirement in 2002 as professor emeritus.

Dr. W.C. Yearian Jr. was married to his high school sweetheart, LaVerne (Robertson) Yearian, for 50 years until her passing in 2010. He is survived by a son, Will, and Rhonda (Lovell) Yearian of Fayetteville, three grandchildren, five great-grandchildren, a niece, and a nephew.

His wish was for a memorial fish fry to be held in his honor to celebrate what would have been his 85th birthday. He requested his ashes to be scattered at his favorite fishing spot on Rosen Lake in Ontario, Canada, and in place of flowers, a donation be made in his honor to the Department of Entomology at the University of Arkansas. 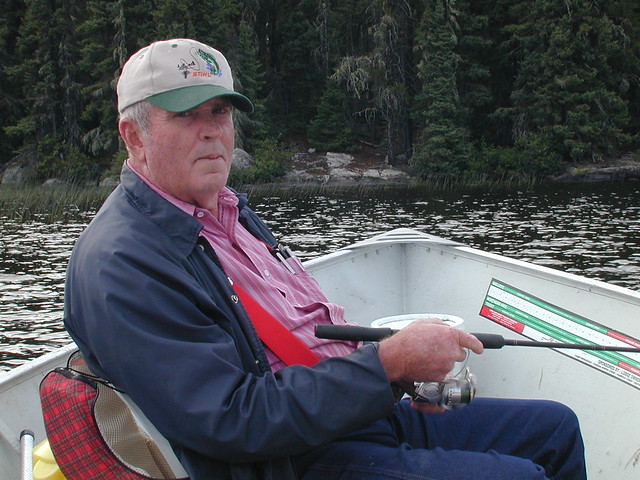 GONE FISHING —  W.C. "Bill" Yearian Jr. was known as a tireless, and selfless scientist who encouraged his students. But he always made time to go fishing. (Photo courtesy Tim Kring)