YEAREND: Most Arkansas fruit crops rally after shaky start to 2021

2021 wasn't so bad after all for Arkansas fruit

LITTLE ROCK – After floods in 2019 and unseasonably warm winter temperatures in 2020, Arkansas fruit growers faced a different extreme at the start of 2021: back-to-back freezes that put the state’s fruit crops in peril. Except for peaches, Arkansas’ strawberry, blackberry and blueberry crops survived, though, finishing the year with smaller but still successful harvests.

Two major cold-weather events — one in February and another in late April — delivered freezing temperatures and more than a foot of snow in many areas of Arkansas. Many of the state’s vegetable crops weren’t in the ground at the time and escaped damage, but widespread damage to fruit crops was expected. 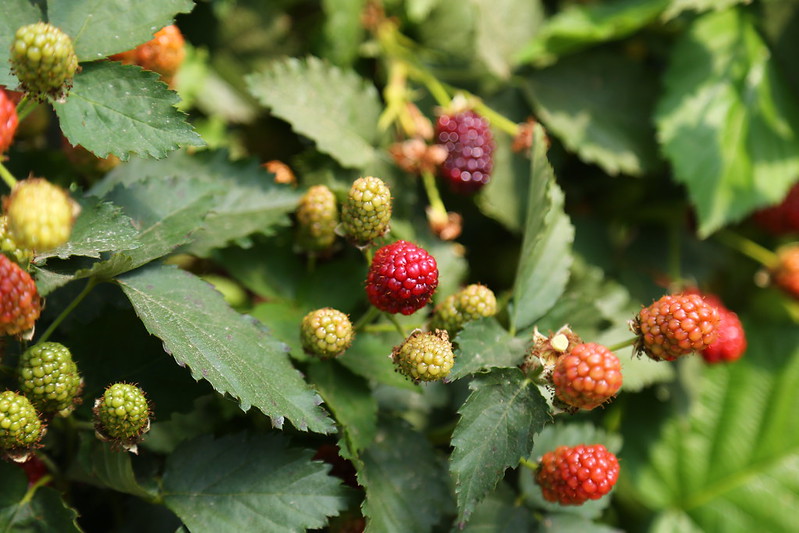 Of all the fruit crops, peaches took the hardest hit. The February freeze damaged buds that were starting to break. Some of the later cultivars survived, only to be taken out by an unusually late freeze in April.

“It was not a good year for peaches,” said Amanda McWhirt, extension specialist-horticulture crops for the University of Arkansas System Division of Agriculture. “The one-two punch of those two cold weather events took out a lot of the crop. Growers who thought they would have late peaches didn’t have much at all.”

Arkansas’ blackberry crop may be slightly smaller than last year’s harvest, but it still fared well.

“We generally start to get worried when temperatures drop below 10 degrees,” McWhirt said. “Our expectation was the buds would be killed, so it’s impressive to see that we still had a pretty good blackberry crop overall.”

Some growers in locations that experienced micro-climate events lost part of their crops, particularly the early crops.

Secondary bud production bolstered Arkansas’ blackberry crop. Blackberries have a primary bud and a secondary bud, so while primary buds were damaged, the secondary buds may have helped to produce fruit for harvest in June.

Many of the state’s blackberry growers were able to protect their crops because they used movable or rotating trellises. The technique allows growers to lay the trellis on the ground and cover the plants.

“We have more growers adopting that system because of the potential we have for extreme weather events,” McWhirt said. “Blankets keep the blackberry plants 5-10 degrees warmer to help protect the buds from cold injury. Some of our blackberry growers who have adopted movable trellises, especially in Northwest Arkansas where we had the most severe temperatures, were able to save their crops due to the use of this trellising system.”

Like blackberries, blueberry buds were beginning to swell, and even bloom in some cases when the February freeze hit. Many growers lost some of their early crops, but late cultivars escaped injury.

“Everything started a little later than normal, and we had a reduced crop because of that,” McWhirt said.

Strawberries — the most cold-sensitive of the berries — survived the cold with some help from growers and Mother Nature.

Strawberries grow close to the ground and the crown of the plant starts incurring damage when temperatures fall below 10 degrees. In February, the plants were still dormant with crowns sitting at the soil line.

Growers had blanketed their plants, which adds 5-10 degrees of protection, right before the winter event deposited as much as 15 inches of snow in parts of the state.

“The snow on top of the blankets acted as extra insulation, so strawberries made it through the cold event fine,” McWhirt said. “We did have some injury to blooms in April, but overall, the crop was pretty good in 2021.”

Since the start of the pandemic, the demand for pick-your-own strawberries has remained high, with consumers seeking out local fruit and a chance to get out of the house.

“A lot of growers increased acreage and planted more in 2021 since there had been a higher demand for pick-your-own berries.”

“In Arkansas, we can grow many berry crops in the home garden, but often homeowners find growers are set up to do it more efficiently and economically,” McWhirt said.

While 2021 started with exceptionally cold weather, the year is ending on an abnormally warm note. And that, too, can be a problem.

Most fruit crops need plenty of “chilling” time in January and February — preferring temperatures below 45 degrees — so they can reset and bloom in spring.

“I think we’re all hoping for a normal winter where we get our normal amount of cold and don’t experience another arctic winter event in 2022,” McWhirt said.