LITTLE ROCK — Consumers are facing rising costs in many sectors, but American farmers, in particular, are seeing a financial squeeze several months down the road, with global fertilizer prices now two to three times what they were in 2020. 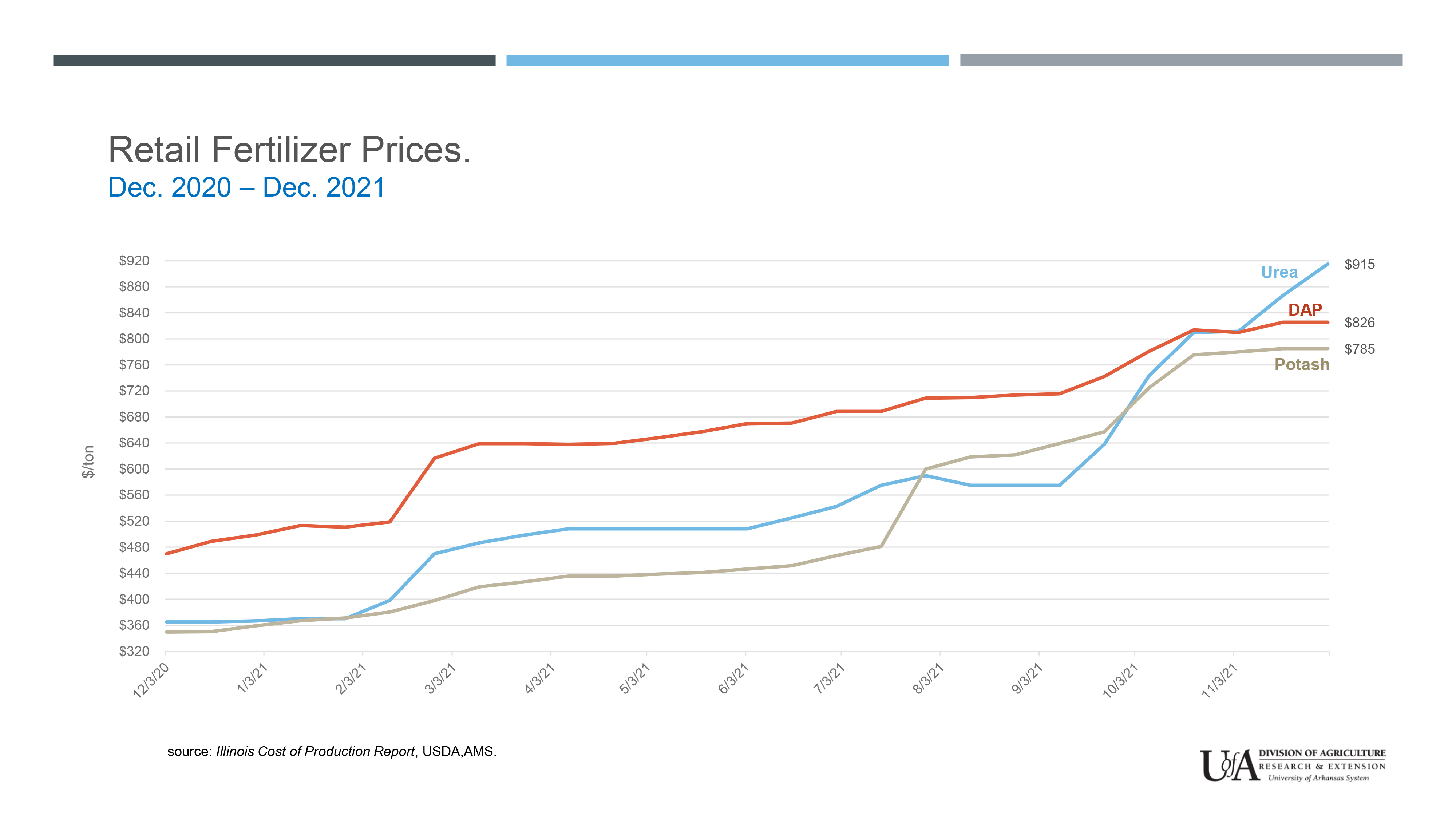 ON THE RISE — The COVID-19 pandemic caused bottlenecks in production and sometimes outright breakdowns in the supply chain as demand for many items froze in the spring of 2020. A corresponding drop in production then led to scarcity and escalating prices as the world began struggling to return to a normal pace of trade, travel and production. (Division of Agriculture graphic.)

Diammonium phosphate, the most widely used phosphorous fertilizer in the world, rose from less than $480 a ton in December 2020 to about $826 a ton in November 2021, according to an analysis of retail fertilizer prices from the U.S. Department of Agriculture. During that same period, potash has risen from about $350 a ton to $785 a ton, and urea, which averaged about $360 a ton in December 2020, is now fetching $915 a ton.

The COVID-19 pandemic caused bottlenecks — and sometimes outright breakdowns — in production and supply chains as demand for many items froze in the spring of 2020. A corresponding drop in production then led to scarcity and escalating prices as the world struggled to return to a normal pace of production, trade and travel.

Trent Roberts, assistant professor of crop, soil and environmental science for the University of Arkansas System Division of Agriculture, said global fertilizer production was an extreme example of this chain of events. In the early months of 2020, the International Fertilizer Association predicted that agricultural production and demand for fertilizer would slow significantly as the COVID-19 virus spread.

“The idea was that countries were going to go into lockdown, and demand for fertilizer was going to be significantly lower,” Roberts said. “But there was actually more demand than what was forecast. You had a perfect storm of reduced production and supply, and demand that was greater than usual.”

Roberts said additional factors at play in supporting the high prices included the rising price of natural gas, which is used in large quantities in the production of nitrogen fertilizer, and announcements from some major fertilizer producing countries, including China, that they will curtail all fertilizer exports.

While the United States does produce many of the key elements of modern agricultural fertilizers, Roberts pointed out that U.S. producers are still participants in the global marketplace.

“Ninety percent of the fertilizer trade occurs outside of the United States,” Roberts said. “Regardless of what we produce or have here, our price is still dictated by global supply and demand. Even if a U.S. manufacturer can produce urea for $650 a ton, if the world market is buying and selling it for $900 a ton, that’s what it’s going to cost. People are going to sell to the highest bidder.”

Scott Stiles, extension agricultural economist for the Division of Agriculture, said the cost of agricultural production in the coming year is hard to overstate.

“2022 will likely be the most expensive year any of us has ever seen,” Stiles said. “Crops with the highest nitrogen fertilizer cost seem to be most impacted. For example, a year ago the combined seed, fertilizer, chemical and fuel expense for corn was $357 an acre. For '22, we expect the fertilizer alone will be $394 an acre. About 80 percent of the increase in corn variable cost seen over the past year is attributed to fertilizer.”

Some light at tunnel’s end
Both Stiles and Roberts said some factors working in U.S. farmers’ favor, however.

“Fortunately, 2022 new crop corn futures have been on a fairly steady climb since early September, and are trading near $5.60 today,” Stiles said Tuesday. “Corn is competitive with soybeans and cotton. I think a key concern for growers will be the record-high cost of producing corn and rice in the upcoming year and having the financial leverage to borrow an additional $250 an acre or more to cover variable costs. That might drive more acres toward soybeans in '22.”

A little bit goes a long way
Roberts said that growers should study recommendations available from the Division of Agriculture, and consider cost-benefit breakpoints when deciding how much to fertilize specific fields.

“Our recommendations are built to maximize yield and profitability,” Roberts said. “Crop response to fertilization follows a law of diminishing returns. Those initial fertilizer applications give us the biggest return on our investment. We can cut fertilizer rates and lose a small amount of yield, but save a significant amount of money.

“It’s better to have a quarter of a tank than an empty tank,” he said. “So maybe we can’t afford to apply the full recommendation, but 50 percent of the recommended fertilizer will get us 85 percent of our maximum yield. A little bit actually goes a long way.”

Roberts said successful farming in 2022 will likely come down to choosing where to make cuts.

“There are certain nutrients for certain crops that we could probably cut for one year, and it would not be catastrophic,” he said. “We might not even notice. But there are other nutrients that if you cut them, it’s going to be devastating.

“In soybean, for instance, we want to follow our recommendation for potash, because we know that’s tightly linked to yield,” Roberts said. “But phosphorous for soybean is a completely different story. On a lot of our soils, we could probably cut out phosphorous from our soybean fertilization program entirely this season, and not see any yield drop.

“That’s not something we want to do every year,” he said, “but this one year, while prices are high, we can probably get away with it.”

Roberts said he expects these kinds of decisions to be a major topic of discussion at the Cooperative Extension Service’s winter production meetings, beginning in January 2022. For a complete list of upcoming production meetings, visit https://bit.ly/2022-ARK-Winter-Meetings.