Once thought rudimentary, complexities of mosquito hearing may be useful for entomologists
skip to main content
News - 2021

Once thought rudimentary, complexities of mosquito hearing may be useful for entomologists

Granted, they are probably not listening to you, but researchers have found that the ability of mosquitoes to hear and respond to sounds is more complex than once believed, said Emily McDermott, assistant professor of entomology for the Arkansas Agricultural Experiment Station, the research arm of the University of Arkansas System Division of Agriculture. 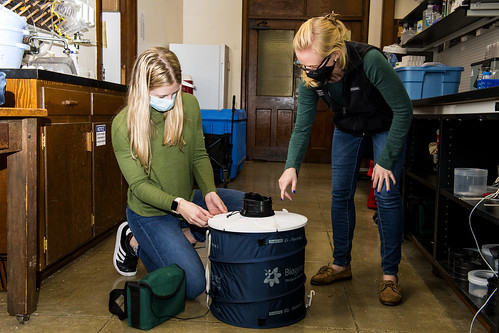 LISTEN UP — Ph.D. student Cassie Steele and advisor Emily McDermott, assistant professor of entomology, set up a trap used to capture mosquitoes in the field. They published a survey of earlier studies identifying and characterizing the hearing abilities of mosquitoes. (U of A System Division of Agriculture photo by Fred Miller)

McDermott’s graduate assistant, Cassie Steele, a Ph.D. student in Dale Bumpers College of Agricultural, Food and Life Sciences, wrote a research paper that surveyed numerous studies investigating the biology of mosquitoes’ hearing and how they use what they hear.

Steele and McDermott began the survey two years ago while they were both working at Walter Reed Army Institute of Research in Maryland. It was published this summer by the Entomological Society of America.

Mosquitoes possess antennal ears that vibrate in response to sound, according to Steele’s and McDermott’s paper. The vibration is transmitted to a biomechanical structure called the Johnston’s Organ, and from there to the central nervous system, by which the mosquito perceives sound.

There are differences in the structures of male and female mosquito hearing that suggest the males’ antennae are more sensitive.

Female mosquitoes might locate other animals, including humans, by sound, McDermott said, but the evidence is not clear. Although research shows that mosquitoes do respond to sounds in the range of human speech, the bigger attracter is likely the carbon dioxide that people expel when they talk. Mosquitoes are also attracted to people by heat and odor.

While at Walter Reed, Steele said she was planning a study to use recorded human voices to see whether the sound alone attracted mosquitoes. But she and McDermott left there to come to Arkansas before the study was launched.

Steele said she hopes to be able to pick that project up again next summer.

Primarily, mosquitoes use their hearing to locate mates, McDermott said. They can differentiate species and sex by the sound of wingbeats. That opens the door for research applications.

Much of the ongoing research into mosquito hearing focuses on how it can be used by entomologists to monitor populations, McDermott said.

Programs to reduce mosquito-borne diseases have used sterile males, males that bear only non-viable offspring, and a bacterium that prevents Aedes egypti mosquitoes from carrying dengue fever. McDermott said audible traps could help scientists monitor those specific males to determine their survival in the wild.

“Trapping and monitoring is the biggest use for understanding and using mosquito hearing,” McDermott said. “What we want to know is do we have survival … is the trait surviving in the population?”

Researchers cited in their survey paper used live recordings and synthesized versions of female wingbeats from specific species to test their usefulness in monitoring the males, Steele said.

Audible traps offer advantages over other types of mosquito traps, Steele said. Using the wingbeats of specific female mosquitoes allows researchers to target males of specific species. The reverse is also true for studies where females of given species are desired.

Testing the use of recorded and synthesized mosquito sounds presents certain challenges, Steele said. The research requires the sounds to be played in areas where the mosquito populations exist, which are often where people live.

“People don’t want to hear constant mosquito buzzing,” McDermott said. “It limits places and times where we can use them.”

The wingbeats of potential mates may be sweet to the mosquitoes, but humans prefer to leave them off their sounds of summer playlists.