FAYETTEVILLE, Ark. — Picture this: As you walk to your car after work, you select a meal from a smartphone menu of your favorites and press “send.” By the time you get home, your food is waiting for you in a 3D printer. 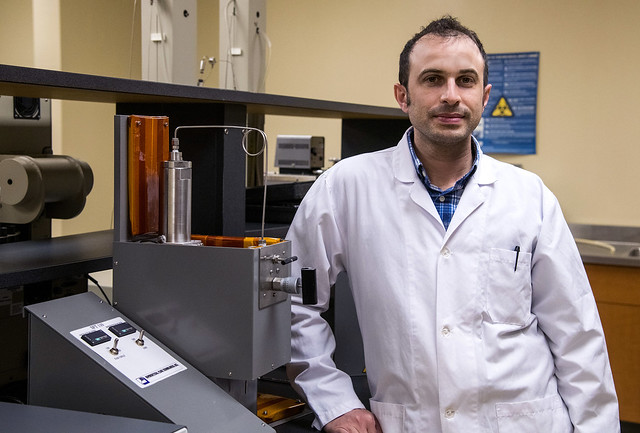 You can give up the guilt over choosing pepperoni pizza three times this week. During your drive home, the 3D food printer has added nanoscale micronutrients customized to your dietary needs. It also added your daily blood pressure and allergy medicines, making your pizza not only good, but good for you.

Reality check — consumer model 3D food printers are not on the shelves just yet. But Ali Ubeyitogullari is pressing toward the day when they will be.

“His work cuts across disciplines, employing food engineering and a strong background in food chemistry with an application in human nutrition,” Subbiah said. “And it promotes multi-departmental collaboration between food science and biological and agricultural engineering.”

“Dr. Subbiah and I have a goal to build a core of excellence in food engineering in the Division of Agriculture and the University of Arkansas,” said Lalit Verma, biological and agricultural engineering department head.

“Dr. Ali Ubeyitogullari is a great addition to the research capabilities in the Arkansas Agricultural Experiment Station in the food engineering specialty,” Verma said. “His joint appointment with our department complements our food engineering expertise to serve the needs of the state and nation.”

A native of Turkey, Ubeyitogullari earned his bachelor’s and master’s degrees in food engineering from Middle East Technical University, and his doctorate in food science and technology from the University of Nebraska-Lincoln.

Ubeyitogullari then served post-doctoral appointments at the University of Nebraska-Lincoln in lipid chemistry and processing, and at Cornell University in Ithaca, New York, in novel food processes and engineering. He joined the Division of Agriculture and Bumpers College in September 2020 as an assistant professor.

Ubeyitogullari said he is assembling his lab at the intersection of food engineering and human health. To accomplish this, he is focusing on two parallel projects. First, he is applying supercritical carbon dioxide technology — a novel green technology — to improve the bioavailability of micronutrients in human foods.

Micronutrients include many elements, like iron, and vitamins, including vitamins A and D, that are essential for human growth and health. Ubeyitogullari said the physical structures of these substances make them difficult for the body to absorb. As a result, many important nutrients in human foods are wasted. Vitamin supplements are among the least bioactive forms of micronutrients, Ubeyitogullari said. “People spend a lot of money buying vitamins, and most of their nutrition value is flushed away,” he said.

The key to making micronutrients more bioavailable — easier to absorb and use — is to change their physical structure, Ubeyitogullari said.

To accomplish this, he employs supercritical carbon dioxide technology to extract, dry, extrude, form nanoparticles and perform other structural manipulations. It allows him to avoid toxic petroleum-based solvents often used to perform such actions.

Ubeyitogullari’s goal is to extract the nutrients from the crystalline structure that restricts their bioavailability, reduce them to nanoscale size and change their surface chemistry to make them more soluble. This is done, he said, by encapsulating the micronutrients in liposomes — spherical vesicles enclosed in lipid layers. These are commonly used as delivery systems for medicines, and they can serve the same purpose for smaller, more soluble micronutrients that are more readily absorbed by the body.

Presently, Ubeyitogullari is applying these technologies to grain sorghum bran. Commonly used as an ingredient in animal feeds or production of oil products, grain sorghum is well adapted to growing in warmer, drier climates, an especially favorable trait in the face of global climate change.

The solid material of the grain remains as a waste byproduct after oil is extracted, Ubeyitogullari said. “What is left behind can be conformed for functional foods.”

Like many foods, the essential micronutrients are mostly locked up in non-soluble form, Ubeyitogullari said. He is using supercritical carbon dioxide technology to extract nutrients from the bran and restructure it for use in popular foods with less nutritional value.

The technology to restructure the macrostructures and microstructures of nutrients sets the stage for Ubeyitogullari’s other project — 3D printing foods.

Such foods could deliver medicines as well as micronutrients, Ubeyitogullari said. “Using supercritical carbon dioxide technology and 3D printers, we could design a food that could deliver stable medication doses.”

A 3D food printer could communicate with a smartphone or other mobile device, Ubeyitogullari said. A user could send a menu selection to the printer from anywhere, and the food would be built from ingredients that would include micronutrient and medication nanoparticles.

Ubeyitogullari’s teaching appointment in Bumpers College means he can apply the technology and new knowledge from his research to food engineering classes. The technology is also a draw for recruiting new students to food science, Subbiah said.

Ubeyitogullari agrees and is developing a scenario to help prospective students envision the promise and thrill of technological advancements. He wants to incorporate instruction in how to design and print foods into student recruiting tours. Prospective students could custom design a chocolate bar with their name or the U of A logo and send it to the 3D printer. At the end of the tour, their customized chocolate bar is ready for them to take home.

That experience can also serve as a proper introduction to his classroom. Ubeyitogullari is planning an undergraduate course in the science of chocolate.

About the Dale Bumpers College of Agricultural, Food and Life Sciences: