LITTLE ROCK — A cold front bringing freezing temperatures to much of Arkansas is expected to arrive late Tuesday night, the National Weather Service warned on Monday. 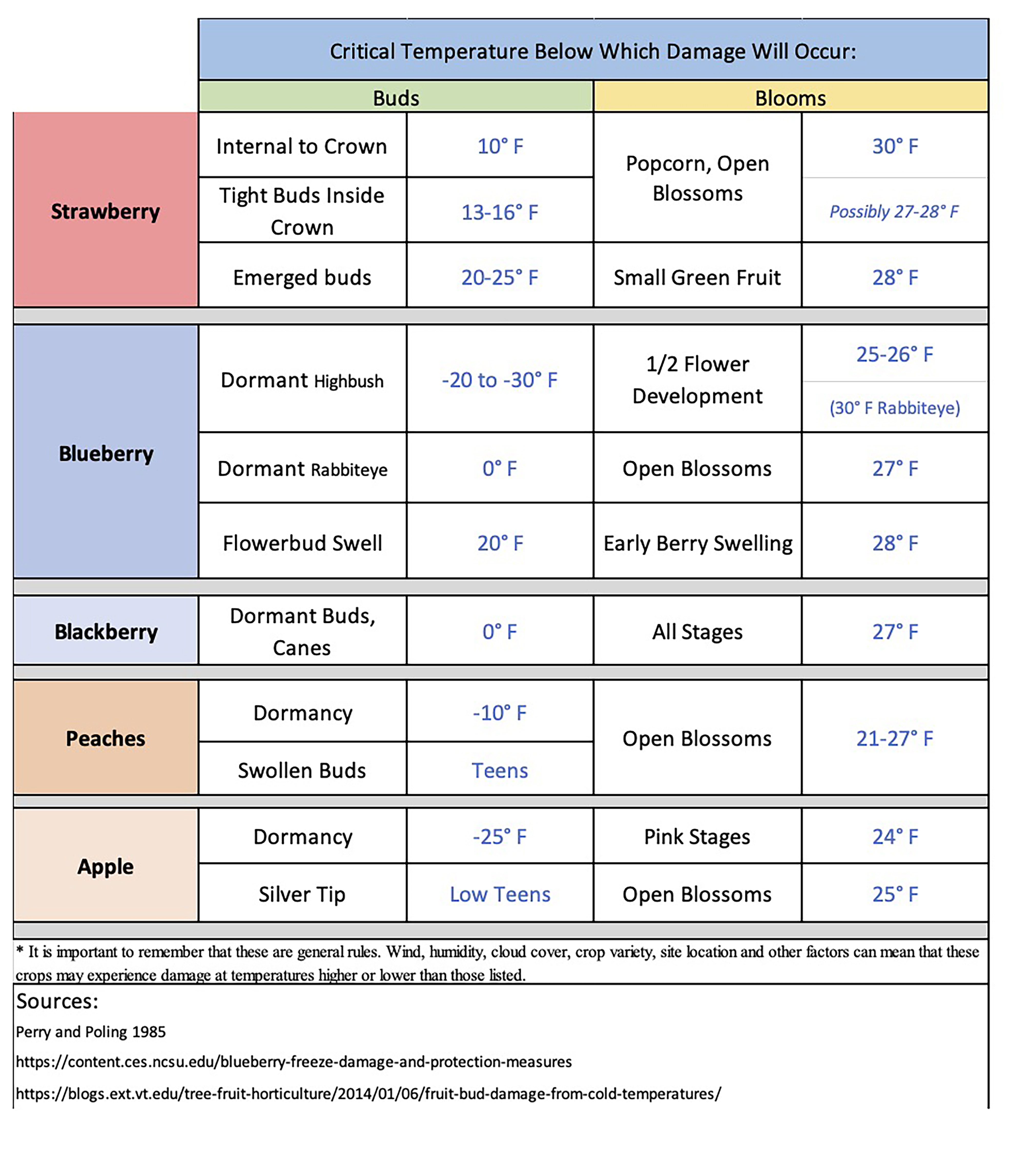 BUCKLE DOWN, COVER UP — A cold front bringing freezing temperatures to much of Arkansas is expected to arrive late Tuesday night, the National Weather Service warned on Monday. (Division of Agriculture graphic.)

The possible freeze event may pose a threat to both horticultural production and the heading wheat crop, as well as other agriculture throughout the state, experts with the University of Arkansas System Division of Agriculture said.

Horticulture crops
Amanda McWhirt, extension horticulture crop specialist for the Division of Agriculture, said growers should be on guard for potential damage to fruit crops, particularly in the northern tier of Arkansas counties.

“Blackberries and blueberries are blooming and setting fruit,” McWhirt said. “Strawberries have a few blooms, but are mostly setting fruit and are starting to be harvested.”

Many Arkansas peach blooms were killed during the notable freeze event in mid-February, when temperatures plunged to record lows throughout Arkansas. Those that survived, McWhirt said, now have small fruit and are just past “shuck split,” when the fruit’s dead flower shuck falls off.

“Blooms are usually the most cold-sensitive and are damaged for the most part just below freezing, at 27-30 degrees Fahrenheit,” she said. “Small fruits can also be damaged once the temperatures get to 26-28 degrees.”

McWhirt said strawberry growers should cover their plants with row covers for protection.

“Other fruit growers may try burning hay or other ways to add warm air around the plants,” she said. “Small warm-season vegetable transplants or seedlings, such as tomato, pepper, corn, etc., should be covered by Tuesday afternoon with upside-down buckets or light blankets.

“Young transplants can be set back or stunted from growing for several weeks by temperatures in the low 30s, and will be killed below freezing,” she said.

Row crops
Corn, rice and soybeans are all in the early stages of spring planting in Arkansas, having been delayed in part by intermittent rains throughout March and early April. Jeremy Ross, soybean agronomist for the Division of Agriculture, said soybeans through most of the state would likely be unharmed by the coming front.

“I don’t too concerned until we have 28 degrees Fahrenheit for over two hours,” Ross said. “At that point, we could see freeze damage. For most of the state, I don’t think we will get that cold, but the northern counties could see these low temperatures.

“Fields that were just planted should be fine, as long as we can get warmer temperatures later this week,” he said.

As of April 18, Arkansas growers had planted about 12 percent of their total planned acreage, according to a U.S. Department of Agriculture report released Monday.

Ross said that the combination of wet and cool conditions could lead to more seedling diseases and damage from preemergence herbicides, however.

“Under these cool conditions, the small soybean plants are not able to metabolize some of these herbicides as well as under warmer conditions,” he said.

Winter wheat, planted in the late months of the calendar year, may be more vulnerable to unseasonably harsh weather than other row crops in the state. Kevin Lawson, staff chair for the Faulkner County Cooperative Extension Service office, said Monday he had received calls from constituents concerning potential wheat injury from the expected plunge in temperatures.

“In Faulkner County, wheat growth stages are anywhere from ‘boot’ to ‘heading,’ so according to the wheat injury chart, this could get interesting,” he said.