LITTLE ROCK — As world markets slowly unfurl from the global knot of the COVID-19 pandemic, futures markets for both soybean and corn responded in a powerfully positive manner Wednesday to the U.S. Department of Agriculture’s annual Prospective Plantings Report. 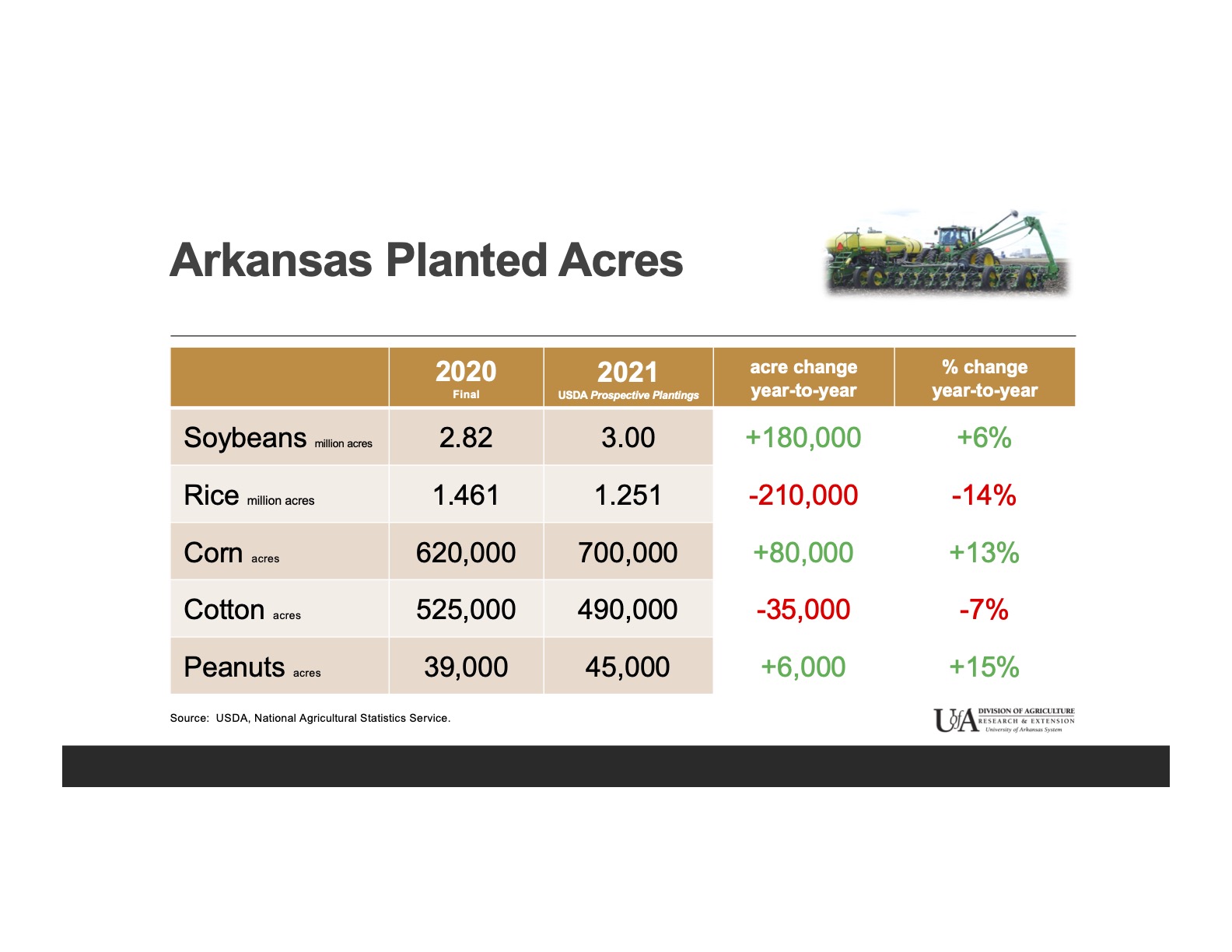 MARKET SURGE — As world markets slowly unfurl from the global knot of the COVID-19 pandemic, futures markets for both soybean and corn responded in a powerfully positive manner Wednesday to the U.S. Department of Agriculture’s annual Prospective Plantings Report. (Division of Agriculture graphic.)

The report, conducted by the USDA’s National Agricultural Statistics Service, reflects producers’ intended acreage for crops across the country based on a survey of about 78,900 farm operations.

Within an hour of the report’s publication, soybean prices were up 70 cents a bushel, and corn up 25 cents — the respective market limits for daily price increases on those commodities. Cotton prices increased by more than a dollar per hundredweight, closing at $80.10 per cwt.

Scott Stiles, extension economist for the University of Arkansas System Division of Agriculture, described the markets as “running red hot” in the immediate wake of the USDA publication.

Soybeans
In Arkansas, soybeans, the state’s No. 1 crop, rose 6 percent to hit a planned 3 million acres. Jeremy Ross, extension soybean agronomist for the Division of Agriculture, said that acreage forecast may be low.

“From talking to soybean producers, I would expect the soybean acreage to be higher than the 3 million acres projected,” Ross said. “Especially if we get some good weather after this week.”

Corn
Arkansas corn saw a substantial increase of 13 percent to 700,000 acres. Jason Kelley, extension wheat and feed grains agronomist for the Division of Agriculture, said the rising market prices for corn at the end of 2020 were expected to prompt greater acreage this year.

“With good planting weather over the next couple weeks I would think 700,000 acres could be easily achieved,” Kelley said.

“Ahead of the report, the average industry guess for soybean acres right at 90 million,” Stiles said. The final number was “up 5 from last year, but not the number the trade was expecting.

Cotton
Even as prices have risen for cotton, planned acreage for the state dropped 7 percent from 2020’s 525,000 acres, down to about 490,000 acres. Bill Robertson, extension cotton agronomist for the Division of Agriculture, said the decrease in acreage reflected the comparative ease — and lower input costs — with which corn and soybeans can be successfully grown.

“You really have to borrow a lot of money to plant cotton or rice,” Robertson said. “There’s just a lot of risk involved. It’s much cheaper to plant corn, and cheaper still to plant soybeans.”

Nationally, the change in planned cotton acreage was essentially flat, falling less than 1 percent from 2020 acreage to about 12 million acres.

Rice
Planned rice acreage declined significantly, both in Arkansas and across the United States.

He said he had expected acreage to be down 10 percent at a minimum.

“Further decreases would depend on rotational crops and prices,” he said. “A good April planting window will be key to keeping the acres in the report, as planting delays will likely give way to more soybeans given the current price situation there.”

Peanuts
Peanuts, while still a relatively small player in Arkansas commodities, continued its steady, years-long gains, increasing by 15 percent to 45,000 acres. Andy Vangilder, agriculture and natural resources educator for the Cooperative Extension Service, said the increasing number of buying points in Arkansas and neighboring states has made the crop more attractive to producers who might otherwise grow cotton.

Peanuts “have continued to be profitable as long as the weather cooperates,” Vangilder said. “I know that Delta Peanut has shown interest in attracting new customers and adding some more acres if producers are interested.”

Overall, crop acreage in Arkansas rose about 1.4 percent over 2020 acreage.