LITTLE ROCK — Despite a year dominated by major weather systems run amuck and a global pandemic, most of Arkansas’ major crops came out ahead in 2020, according to a Jan. 12 report from the U.S. Department of Agriculture. 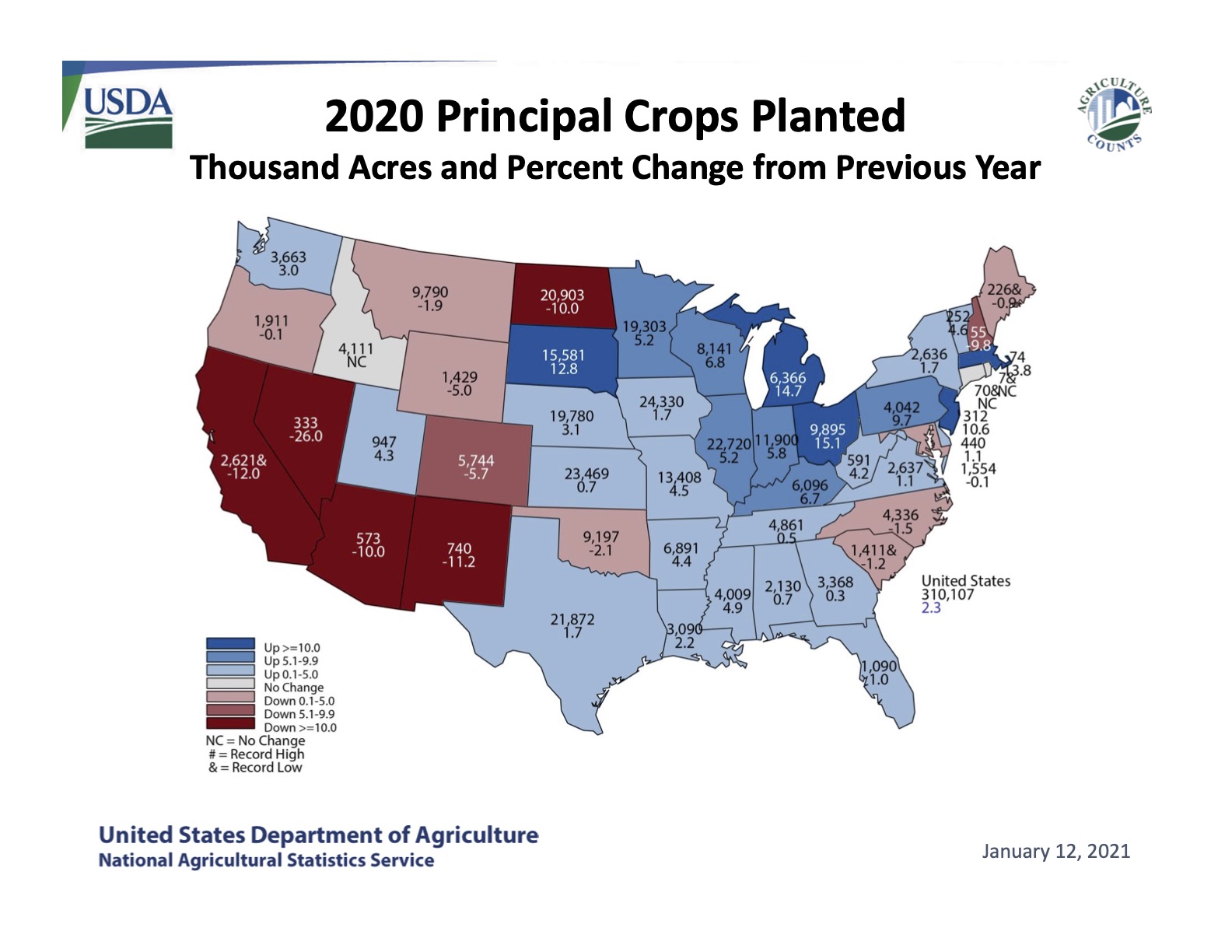 Most of the country’s major commodities — corn, sorghum, rice and soybean — were up. Cotton production, however, fell 25 percent nationwide from 2019 totals.

Jason Kelley, extension wheat and feed grains agronomist with the University of Arkansas System Division of Agriculture, said the drop in corn acreage in 2020 was expected.

“We had a good portion of our acres that were planted in early May, later than desired, so being able to hit 184 bushels per acre for a state average is tremendous,” he said. “The lack of extreme heat during June and July really helped those late-planted acres reach maximum yield potential.

“Late-season tropical storms Laura and Beta delayed harvest and caused lodging in some situations that reduced yields,” Kelley said. “Overall, considering everything, we had a decent year.”

Kelley said that with rising grain prices, Arkansas growers may very well plant upwards of 800,000 acres of corn in 2021, if the state experiences good weather during the March-April planting window.

Arkansas growers planted about 2.82 million acres of soybeans in 2020, harvesting about 2.78 million acres, marginally beating 2019’s 2.61 million-acre harvest. The average yield increased from 49 bushels per acre in 2019 to 50 bushels per acre, resulting in a total production of about 139 million bushels.

Scott Stiles, extension economist for the Division of Agriculture, said rallying market prices for both corn and soybeans will likely drive growers to plant even greater acreages in those two crops this year.

“The big market moves over the last five months have occurred in corn and soybeans,” Stiles said. “Price-wise, both have increased at least a third since August. I would say the '21 budgets favor those two crops today.

“In many private estimates for U.S. 2021 acres, most are looking for an 8 to 8.5 percent increase in soybean acres this year. Using that as a guide, our acres would move back north of 3 million to 3.1, most likely,” he said. “Where we land ultimately on acres will be a function of price direction between now and planting, and there could be more upside for both corn, soybeans and cotton this spring.”

In August, a derecho storm event brought straight-line winds that destroyed millions of acres of corn, soybeans and other crops in Iowa and other Midwestern states. La Niña-related dryness resulted in smaller crops in key production areas of Argentina and Brazil. These events and others, paired with an increase in global demand largely seated in China, contributed to rising market prices.

“Export demand for corn and soybeans is much stronger in the 2020 marketing year,” he said. “China is the key driver of the increased exports of both crops. Normally, China buys very little if any corn from the United States. But in the current marketing year, they are our number one export market.”

Stiles said that corn exports are up 135 percent, and soybean exports are up 83 percent, over same-week sales last year, with China as the top buyer for both commodities as well as grain sorghum and cotton.

“Stronger export demand combined with declining production has resulted in the tightest corn and soybean ending stocks since 2013 — a period of record-high grain prices,” Stiles said.

Arkansas wheat producers saw a 50 percent increase in harvested acres from 2019 to 2020, rising from 50,000 acres to 75,000 acres. Both numbers, however, represent significant losses of planted seedings, largely due to inclement weather. Growers planted about 175,000 acres of winter wheat in 2018, and 110,000 acres in 2019. As discussed here (https://bit.ly/3q9XwzE), rallying market prices have propelled growers to continue pursuing wheat as a profitable crop, with Arkansas growers planting about 180,000 acres of winter wheat in 2020.

Growers saw average yields of about 7,500 pounds per acre, a marginal improvement over 2019’s 7,480 pounds per acre. Overall production, saw a three-year high of more than 108.1 million hundredweight.

Jarrod Hardke, extension rice agronomist for the Division of Agriculture, said 2020’s rebound was impressive, given the year’s prolonged, wet spring — only the latest in a series.

“Our planted acreage could have extended even higher had we been given better planting opportunities,” Hardke said. “Overall, the average yield was not a huge surprise as the summer was once again mild as it was in 2019, so the delayed planting dates were helped by the lack of late summer heat.

“There were a large number of variables impacting the crop though, and to achieve a great yield average we had a lot of lower-yielding fields and a lot of higher-yielding fields,” he said. “It all worked out to what many growers described as being right in line with their three-year yield averages, which is essentially what we turned out with overall.”

“Rice prices have moved mostly sideways since last fall,” Stiles said. “Rice acres rebounded in 2020. Yields were good. Long-grain production was 36 percent above 2019 and ending stocks are comfortable. That's in contrast to soybeans and corn that are seeing ending stocks fall back to 2013 levels when prices were at historic, all-time highs.

Arkansas peanut growers continued to expand statewide operations, inch by inch, harvesting 38,000 acres out of 39,000 planted. While still an expanding commodity crop for the state in the 21st century, the harvested acreage represents a 15 percent increase over 2019, and a 65 percent increase over 2018 acreage. While average yield did fall significantly in 2020 by about 400 pounds per acre to 4,800 pounds per acre, overall production grew to more than 182 million pounds. Nationally, U.S. peanut growers produced about 6.1 billion pounds of peanuts in 2020.

Bill Robertson, extension cotton agronomist for the Division of Agriculture, said global economic factors, largely stemming from the COVID-19 pandemic, as well as regional weather patterns, contributed to the decline in Arkansas cotton acreage in 2020.

“Falling prices because of rapidly declining mill usage of cotton related to COVID-19, and wet and cool weather during much of the planting window, directly impacted planted acres,” Robertson said. “Arkansas was only at the 50 percent mark for planting as we rolled into mid-May, which is the end of our favorable planting window. The most favorable conditions for planting did not occur until the end of May.

“Conditions for growth and development were great during much of the season,” he said. “Many producers felt that yield potential on Aug. 1 was the best they had ever experienced and could have topped 1,300 pounds per acre.

“Several hurricanes and weather fronts delayed harvest and resulted in loss of fiber quality and yield,” Robertson said. “However, we still managed to set a record yield of 1,200 pounds per acre. Current movement in commodity pricing has many predicting a drop in 2021 cotton plantings in Arkansas of 15-20 percent from 2020 acres.”

“Like corn and soybeans, cotton prices have increased, too, over the last five months, but not to the same extent,” Stiles said. “Cotton prices are up about 23 percent since August, and new crop December futures closed at 77 cents today. Not a bad price, but not high enough to compete with corn and soybeans in the areas of the state that are looking at $5 corn and $12 soybeans today.

“To compete with corn and soybeans, the yield bar for cotton on our typical share lease farms is high,” he said, “around 1,300 pounds at today's prices.”

Stiles said that rising input costs will likely have ripple effects on the overall agricultural market.

“As grain prices have increased, so have fertilizer prices,” Stiles said. “Crude oil was $33 per barrel on Nov. 1, when the first COVID-19 vaccine announcement was made. Today it's $53!

“All crops will be a bit more expensive to grow this year, and in need of higher crop prices to offset added production costs,” he said.