LITTLE ROCK — Arkansas producers planted about 180,000 acres of winter wheat in the fall of 2020, according to a report released Tuesday by the U.S. Department of Agriculture. The acreage is the highest for the state since 2017, when growers planted about 200,000 acres. 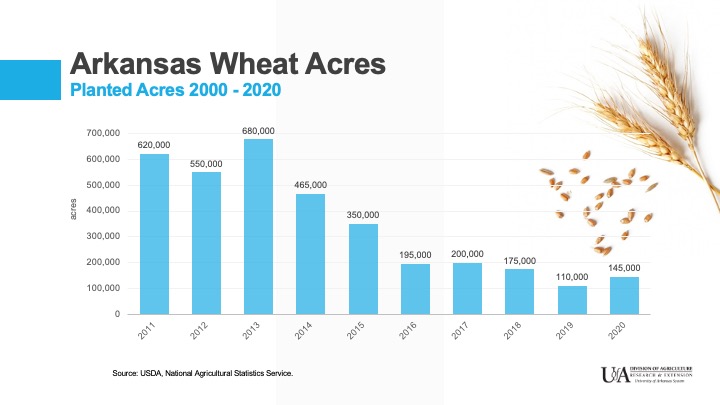 While the acreage represents an increase of more than 24 percent over 2019’s plantings, Arkansas wheat acreage is still a fraction of what it was less than a decade ago, when growers planted about 680,000 acres in 2013.

“Like corn and soybeans, wheat prices have struggled the last few years,” Stiles said. “The average producer price for wheat from 2016 to 2019 was $4.71. In most share lease arrangements, our growers need a price of $5.50 or better to cover input costs.”

Stiles said that growers typically sell a given year’s crop based on price signals from the Chicago Mercantile Exchange — in this case, the 2021 crop will be based on the CME July 2021 futures contract.

Jason Kelley, extension wheat and feed grains agronomist for the Division of Agriculture, said the wet weather, endemic to much of 2020, combined with limited seed availability, ultimately capped the state’s total wheat production.

“I thought we might have been able to get a few more acres of wheat planted this year, but in a lot of areas the weather was a limiting factor and only allowed a narrow window to get wheat planted, and getting summer crops harvested took priority,” Kelley said. “With the reduced wheat acres the past few years, there was also a limited amount of seed for planting, which may have also limited planting.”

Kelley said that recently planted wheat acres in Arkansas appear to be off to a good start.