With shift in rains, Arkansas rice growers close in on total acreage

LONOKE, Ark. — As anyone who’s ever seen their working conditions boiled down to a single pair of digits can tell you, big numbers don’t always tell the whole story. 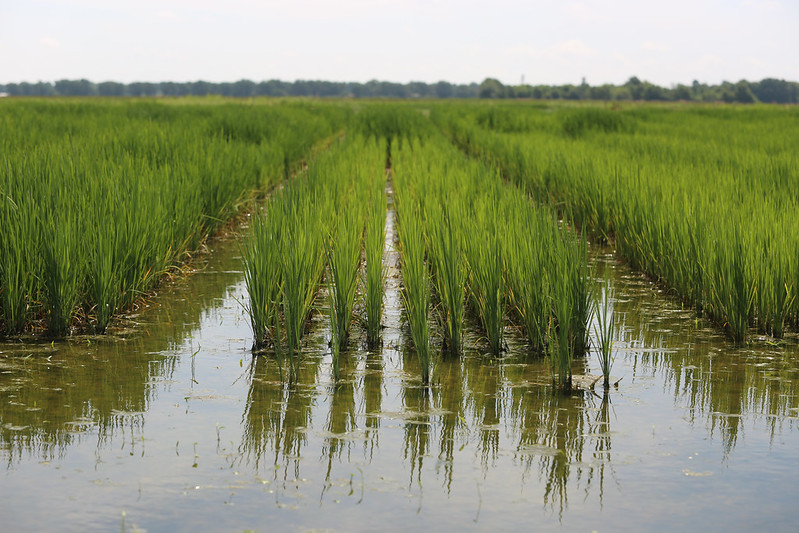 CLOSING IN — Rice growers in the southern two-thirds of the state have begun to catch up with those in the northern third, as shifting rain patterns have allowed growers to plant increasing acreage as things dry out south of Interstate 40. (Division of Agriculture photo.)

To see the U.S. Department of Agriculture’s telling of it, for example, the 14-day period that ended May 10 represented two weeks in a row in which seven out of seven days were “suitable for fieldwork” for Arkansas farmers.

Jarrod Hardke, extension rice agronomist for the University of Arkansas System Division of Agriculture, has spent the better part of the spring driving from one experiment plot to another. He said he knows more than a few growers who might see it another way.

“I’d say the northern third of the state would strongly disagree with that assessment,” he said Tuesday, with a laugh. “Maybe two to three out of seven.”

A tale of two rice states
Statewide, rice planting progress sat at 67 percent as of May 10. That’s midway between last year at this time — 48 percent — and the five-year average of 82 percent. This is understandable, given the intermittent rains that have defined the state’s weather for the past 20 months. But again, that number doesn’t tell the whole story.

“Very early on, the northern third of the state was missing more of the rainfall, in both frequency and amount, so they made good, early progress this season,” Hardke said. “The southern two-thirds of the state, through most of March and April, was just not getting anything done.

“Over the last couple of weeks, some of these weekend rains have come in and hammered that northern third, especially around Jonesboro,” he said. “So the southern two-thirds is now catching up.”

The fates of individual rice growers in the state are equally scattered, county to county and neighbor to neighbor. Dave Freeze, Greene County agricultural agent, said some growers in his area, especially those farming on higher ground, have as much as 85 percent of their planned rice planted, while others have as little as 10 percent.

Freeze said Greene County typically averages about 80,000 acres of rice each year. While planned rice acreage in the county was up about 5 percent because of price competition, he said, continuing rainfall may pull the total acreage as low as 65,000 acres or lower.

“The good news is, we haven’t had to flush any rice,” he said. “But otherwise, it’s been pretty slow recently.”

Too wet, too dry
In the state’s southernmost counties, many growers are grappling with the opposite problem. John Farabough, Desha County agricultural agent, said that by the time many fields in his area dried out enough for fieldwork, the soil had lost too much moisture to support rice sprouting, emergence or stand establishment.

“We’ve got a lot of guys that are actually starting to water down furrows right now,” Farabough said. “I know we’re supposed to get some rain this weekend, but we’re pulling the trigger to make sure our crop is taken care of.”

Farabough described much of the season as a “rollercoaster,” noting that at least one grower had organized his farmworkers into day and night shifts to take full advantage of windows of dry weather.

“He had one crew doing field prep in the day, and another planting all night,” he said. “He said he’d keep doing it until the rain hits again.”

Motivating factors
Arkansas growers reported an intention to plant about 1.39 million acres of rice, according to the USDA’s Prospective Plantings report, released March 31. The state’s final rice acreage will be subject to multiple external factors. The fact that almost no rice was early planted, due to persistent rainfalls throughout March, may lower the overall acreage.

The deadline for declaring prevented planting in Arkansas rice is May 25, so continued rainfall in the northern part of the state over the next week could also have an outsized impact on total rice acreage. But the continued suppression of soybeans markets may ultimately prove to be a more powerful motivator, Hardke said.

“Rice prices are better than any other option — certainly soybeans — as far as going in late,” he said. “Depending on the next week’s rain, we could still achieve 1.5 million acres of rice.”