LITTLE ROCK — Arkansas cotton gins may still be a long way from the heyday of the year 2000, when 86 gins across the state processed the fiber of 1.2 million cotton acres, but as both acreage and production increased in 2019 for the fourth consecutive year, growers did at least have one additional facility to help move their products to market. 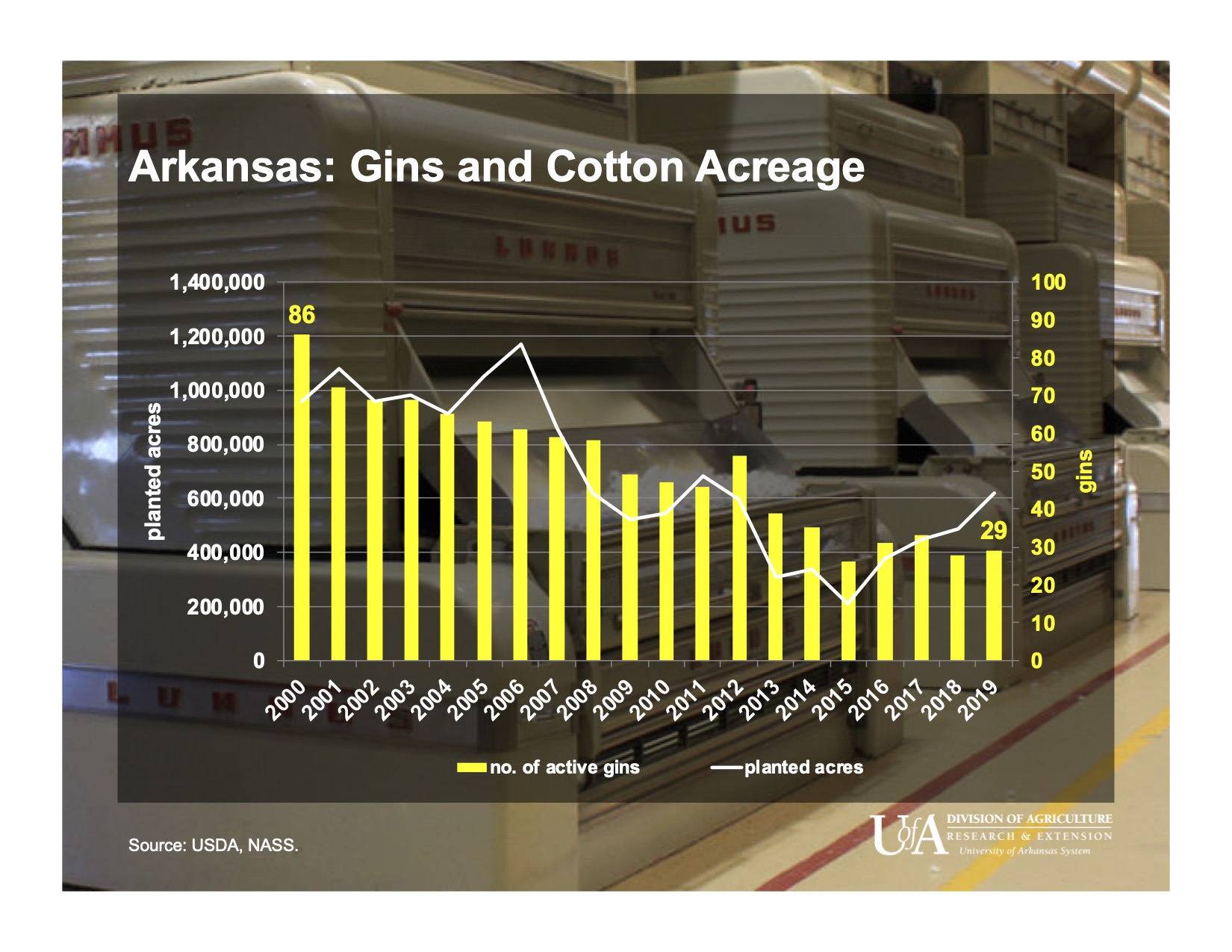 INCREASED CAPACITY — While the number of cotton gins in Arkansas increased by only one in 2019, the state's overall ginning capacity continues to grow, as smaller gins are replaced with larger ones, and continuing to gradually ease the production bottleneck, according to the Cotton Ginnings 2019 Summary, a report released Tuesday from the U.S. Department of Agriculture’s National Agricultural Statistics Service. (Division of Agriculture graphic.)

The number of active cotton gins in Arkansas increased by one in 2019, bringing the state total to 29 and continuing to gradually ease the production bottleneck, according to the Cotton Ginnings 2019 Summary, a report released Tuesday from the U.S. Department of Agriculture’s National Agricultural Statistics Service.

Scott Stiles, extension economist for the University of Arkansas System Division of Agriculture, said that the overall number of gins was less important than the overall capacity.

“Seventeen of the 29 gins in the state are running at least 40,000 bales or more of volume annually,” Stiles said. “The smaller gins continue to disappear. Last year, no gins with less than 7,000 bales of annual volume operated. This trend to fewer and larger gins has been happening for decades across the United States. However, with acreage recovering the last four years, we're seeing a leveling off at least in overall gin numbers in Arkansas.”

In February, developers broke ground for a new gin near Griffithville, Arkansas, with plans to begin operation in the fall. If their efforts come to fruition, it will be the first active cotton gin in White County in more than 60 years.

A strong year for Cotton yield
2019 marked the strongest year for Arkansas cotton production since 2011, with more than 1.5 million bales of cotton ginned in the state, harvested from 620,000 planted acres — a considerable leap over 2018’s total of about 1.27 million bales. According to the USDA’s May 12 Crop Production report, 2019 also set a state record for average cotton yield in Arkansas, at 1,185 lint lbs. per acre, putting it third in the nation behind California and Missouri.

About 19.4 million bales of cotton were ginned in the United States in 2019, 8 percent of which was ginned in Arkansas, according to the ginnings summary.

“Looking ahead, we expect to see cotton acreage down some in 2020 due to lower prices,” he said. “The cotton industry has been negatively impacted by COVID-19 and the widespread shutdown of retail businesses. Cotton prices dropped by over 25 percent between early January and mid-April.”

In its monthly World Agricultural Supply and Demand Estimate report, also released Tuesday, the USDA estimated the balance of supply and demand for the 2020 crop, putting the average producer price for the year’s crop at 57 cents/lb.

Bill Robertson, extension cotton agronomist for the Division of Agriculture, said conversations with some consultants pointed to speculation that cotton acres in the state may drop as much as 30 percent in the coming season.

“I’m hearing doom and gloom from seed salesmen, saying that lots of seed that was booked is not being picked up,” Robertson said. He said that the intermittent rains that have made so much of agriculture in the Mid-South an uphill battle for the past 19 months may also curb production.

“I think we could be down 15-20 percent from last year, even if the rain passes and we can plant the rest of the crop next week,” he said. Monday, the USDA estimated planting at about 26 percent of total cotton acreage in the state, well behind the five-year average of 47 percent for this point in the season. “If it rains all this week, we’ll have very narrow planting windows and could see a bigger drop.”

Stiles noted that the 2019 yield record highlighted a positive prospect, given the heavy amounts of rainfall that growers faced throughout the year.

“We can have delayed planting and still produce a record crop, so long as we have record high temps and no rain in September,” he said. “We'll need a repeat of that this year.”