FAYETTEVILLE, Ark. — Animal scientists at the University of Arkansas System Division of Agriculture have demonstrated that replacing crude proteins in hog diets with feed grade amino acids can reduce the carbon footprint of swine production. 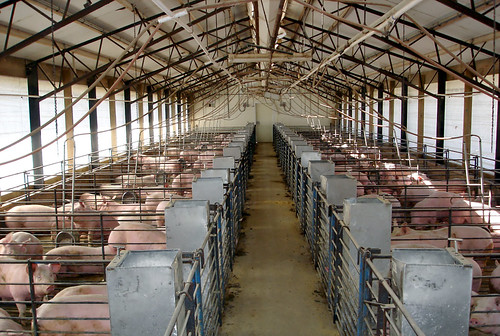 Commercially available amino acid supplements also help reduce feed costs while maintaining animal health and production, said Charles Maxwell, professor of swine nutrition and management for the Arkansas Agricultural Experiment Station, the research arm of the Division of Agriculture, and the Dale Bumpers College of Agricultural, Food and Life Sciences at the University of Arkansas.

Nitrogen compounds derived from excess amino acids in crude protein ingredients in swine feed end up in the manure and urine, Maxwell said. Those excreted nitrogen compounds can be oxidized by soil and air, and some of it is released into the atmosphere as nitrous oxide.

“Nitrous oxide has a greenhouse gas effect that is 298 times that of carbon dioxide,” he said. “It has the next largest impact on global warming after CO2 and methane.”

Hogs and pigs add $56 million to Arkansas’ agricultural economy, according to the 2019 Arkansas Agricultural Profile, published by the Division of Agriculture (http://bit.ly/AAES-AgProfile2019). Maxwell thought reducing its carbon footprint was worth studying.

Nitrogen production is the result of excess amino acids introduced to animal metabolisms by crude protein in feed, Maxwell said. These sources in swine feed are typically corn and soybean meal.

Amino acids are essential for proper tissue development in animals, Maxwell said. A number of these are particularly critical, including lysine, valine, isoleucine and histidine, among others. They are called “limiting amino acids” because insufficient concentrations of them can impair growth performance. They are present in naturally occurring concentrations in crude protein but are not balanced for swine and other animals.

When crude proteins are mixed in feed to provide sufficient lysine, for example, they will also add excessive amounts of other amino acids. Those excesses are converted to nitrogen by the animal’s metabolism and excreted in urine and manure.

“Replacing some of the crude protein ingredients with feed grade amino acids allows us to balance limiting amino acid requirements more precisely, and that can reduce the amount of nitrogen that would be excreted,” Maxwell said.

He added that the cost of these supplements is relatively low, helping to reduce feed costs.

The trick, Maxwell said, is to replace as much of the crude protein as possible with supplements of limiting amino acids without disrupting the total nutritional needs of the pigs.

Maxwell and Tsai designed five experiments — two nursery studies and three grow-finish studies —in an attempt to define the practical limits for replacement of crude proteins in swine diets with feed grade amino acids without impairing growth performance or carcass composition. The experiments were carried out at Division of Agriculture wean-to-finish swine facilities at the Savoy Research Complex in Washington County.

“The goal was to develop high inclusion of amino acids in diets that would achieve the same gain and efficiency as feeding protein-based diets,” Maxwell said. “We think we have achieved that up to the seventh limiting amino acid.”