LITTLE ROCK — Beef and pork processing rebounded last week after dropping sharply, while wholesale beef prices continued rocketing to new record highs, according to an analysis done by John Anderson, economist for the University of Arkansas System Division of Agriculture. 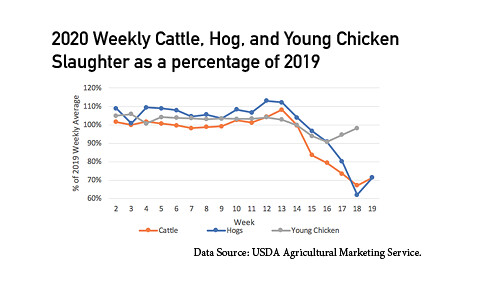 Anderson is head of the agricultural economics and agribusiness department, with a joint appointment in the Dale Bumpers College of Agriculture, Food and Life Sciences. His analysis was drawn from the May 8 Estimated Daily Livestock Slaughter under Federal Inspection Report. The report is issued by the U.S. Department of Agriculture’s Agricultural Marketing Service.

Cattle and hog slaughter figures finally turned higher last week after several weeks of falling sharply because of multiple plant shut-downs and slow-downs due to COVID-19.

Anderson said that while the modest bounce in slaughter levels “is a positive development, suggesting at least the beginning of a move back toward normal, processing capacity remains constrained.

While major beef cuts surged, Anderson said the growth in the value of beef trimmings, a major component of ground beef, “has been particularly astonishing.”

For the week ending April 3, the price of fresh 50 percent lean beef trimmings averaged $28.49 per hundredweight.

“Last week, it averaged $275.28 per hundredweight, an increase of more than 800 percent,” he said. “With production sharply lower and demand for this staple item strong, prices have exploded.”

This is not the first time beef trimmings have seen this level of pricing.

“While little remembered now, fresh 50 percent lean trim prices topped $200 per hundredweight about this time of year in 2017,” Anderson said.

Poultry production seems to be closer to the light at the end of the COVID-19 tunnel.

“Data suggests that the broiler sector, as a whole, has come closer to resuming normal operations,” he said. "Broiler slaughter hit 162 million birds, which is 98 percent of 2019’s weekly average rate of production.”

To read more of Anderson’s take on COVID and consumer spending, see this and other economic impact reports at https://bit.ly/AR-Ag-Eco-Impacts2020