LITTLE ROCK — For more than three decades, entomologists and agricultural experts in the United States have kept a watchful eye on European gypsy moths, a migratory pest with a reputation for devastating forests. 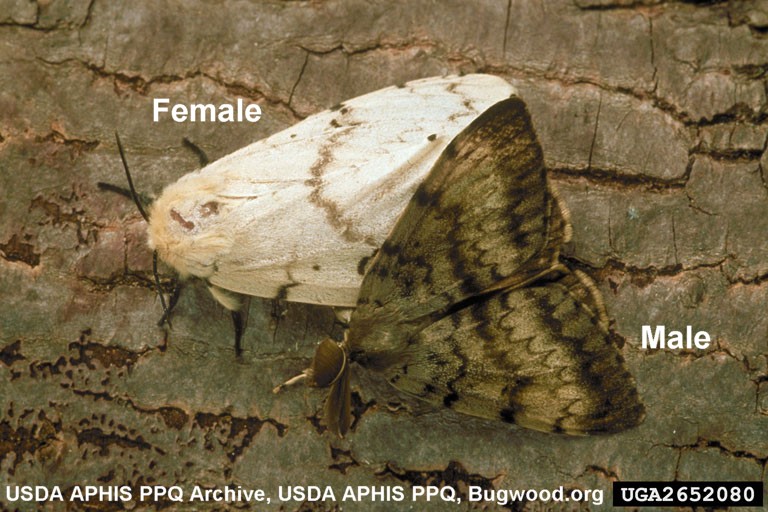 TRAPPING TROUBLE — The European gypsy moth, or Lymantria dispar dispar, has been a pest in hardwoods in the northeastern United States since the mid-19th century, according to the U.S. Department of Agriculture. There are known to be established populations in at least 19 states. The University of Arkansas System Division of Agriculture Cooperative Extension Service is key in trapping and tracking the pest's populations in the state.

The European gypsy moth, or Lymantria dispar dispar, has been a pest in hardwoods in the northeastern United States since the mid-19th century, according to the U.S. Department of Agriculture. There are known to be established populations in at least 19 states.

Each year, the USDA’s Animal and Plant Health Inspection Service enlists the help of various state agencies throughout the country to help track and trap the moths, to identify their migratory pattern and detect burgeoning populations before they escalate. The University of Arkansas System Division of Agriculture Cooperative Extension Service has always provided some of the most extensive manpower for this project in Arkansas, with agents positioned in all 75 counties in Arkansas.

John Hopkins, professor of entomology for the Division of Agriculture, said the moth could pose a real threat to forestry in Arkansas, if a population were to become established in the state.

“It’s a devastating forest defoliator,” Hopkins said. “There are vast acreages in the northeastern United States that have been eaten bare by this moth.”

As caterpillars, the moths prefer to feed on oaks, but several other species of hardwood may serve as hosts. Older larvae will also feed on conifers including hemlock, pines, spruces and white cedar, according to the USDA.

Paul Shell, plant inspection and quarantine program manager for the Arkansas Department of Agriculture’s Plant Industry Division, said that while many trees can survive an initial attack from the moth, repeated seasons of exposure can have a ruinous toll.

“The primary damage comes from the caterpillars that hatch out from the egg masses and defoliate hardwood trees, both in forested areas and urban or suburban areas,” Shell said. “A defoliated tree will usually put out a new set of leaves if early enough in the growing season, but this does stress the tree. Repeated years of defoliation can cause death of large swaths of hardwood trees.”

Arkansas began participating in the trapping program in the 1980s, Shell said. The state’s first outbreak, which was eradicated, was in the Hardy area, bordering Fulton and Sharp counties.

“We had a huge population in the Compton area near the Buffalo River and Osage Creek in the early ‘90s,” he said. That eradication effort required several years of spraying with Bt (Bacillus thuringiensis) bacteria — commonly used to control pests in agricultural applications — and intensive trapping, until the area was considered eradicated in 2002.

There has been little positive detection of the moth in the nearly two decades since. Hopkins said that one European gypsy moth was identified in the Camp Robinson area in Pulaski County in 2018 but that none were identified in Arkansas in 2019.

In the event that a gypsy moth is positively identified in an area, the USDA and the Arkansas State Plant Board will deploy ongoing trapping in that area for two years, Hopkins said, “to determine if there is a breeding population in this area or if the previous catch was just a hitchhiker.”

Shell said that the moth’s devastating migration is often aided by manmade transport.

“The female moth lays egg masses which look like wooly brown patches on trees,” Shell said. “However, she can also lay these egg masses on other objects like campers, outdoor furniture, BBQs, RVs and outdoor equipment. If someone has an object with an egg mass on it, and they travel into other areas, there is a chance that the eggs can hatch out and therefore the insect can spread into new areas.”

Each year, each county extension office is asked to deploy five pheromone “sticky” traps throughout its respective county. If a gypsy moth is positively identified in an area, the USDA deploys 36 traps per square mile for the next two years.

“The traps are deployed in May and picked up in August,” Hopkins said.

The annual, preventative trapping involves deploying traps in areas known to attract either tourists or involve interstate transport, ranging from campgrounds and picnic areas to warehouse and truck stops.