LITTLE ROCK — Dozens of Arkansans have been on the lookout for Asian giant “murder hornets” after seeing numerous media reports about the invasive species in the United States. 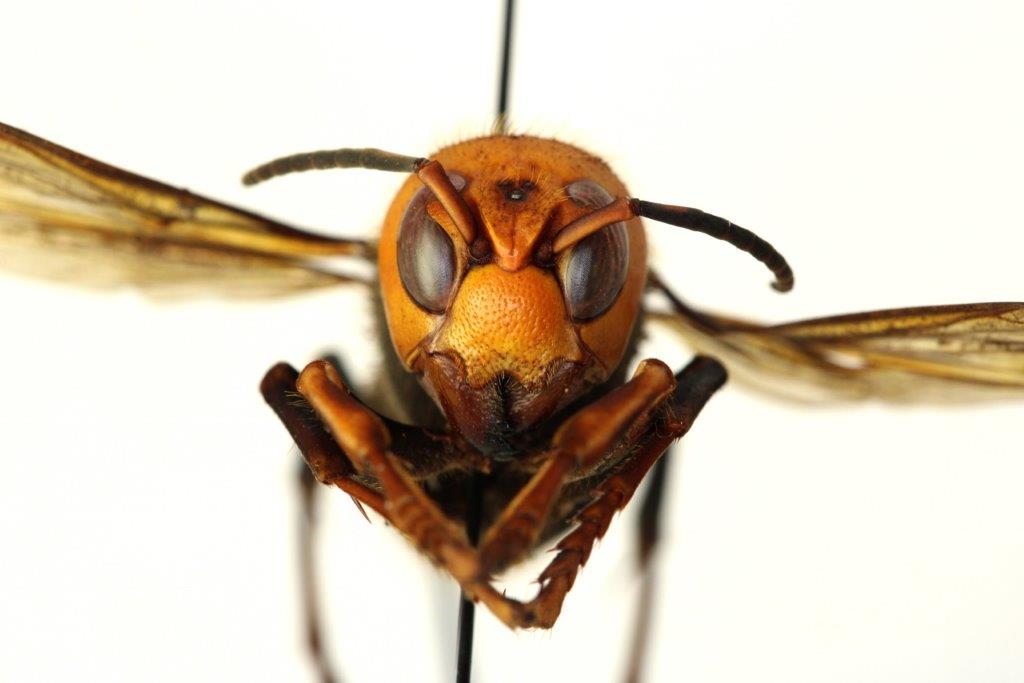 The bad news is that Asian hornets indeed are in the United States. They arrived late last year in Washington state and are becoming active again with warming spring temperatures. The good news is that the giant insects have not appeared in Arkansas, though several extension agents in the state have received calls from homeowners who have reported seeing what they thought to be the giant insects.

Mistaken identity
“We have had numerous panicked reports from across the state from homeowners,” said Jon Zawislak, extension entomologist and apiary expert for the University of Arkansas System Division of Agriculture, “but what we are likely seeing right now are Vespa crabo queens, a type of European hornet.”

The markings for the European and the Asian hornets are distinct. The Asian hornet, or Vespa mandarinia, grows up to two inches long, has a large orange or yellow head with prominent eyes, and a black and yellow-orange striped abdomen. They form large colonies that nest in the ground, according to the Washington Department of Agriculture.

The “murder” hornets’ ominous nickname refers to their practice of viciously attacking honeybees, tearing off their heads and taking the carcasses back to their nests to feed their young. Just a few Asian giant hornets can destroy a honeybee colony in a few hours.

“That’s bad news for a struggling industry that continues to reel from average colony losses of 30 percent or worse every year for over a decade,” Zawislak said.

Honey is a sought-after specialty crop in Arkansas. Arkansas beekeepers maintained about 28,000 colonies and harvested 1.4 million pounds of honey in 2018, the latest year for which U.S. Department of Agriculture data are available.

Natural barriers
The Vespa mandarinia is native to Asia and found as far north as eastern Russia, down to southeast Asia and into India and Japan. They prefer to live in low mountain areas and forest habitats, while almost completely avoiding open plains and high-altitude climates.

“This is good news since there are many high mountains and a very vast plain separating Arkansas from Washington state,” Zawislak said. “These should stand as great barriers to the natural migration of these introduced hornets.

“Of course, the Pacific Ocean should have been a pretty good barrier too,” he continued. “But as the usual suspect, people are responsible for the movement of many species, which can often become invasive pests in new lands. It may only be a matter of time before they discover the beauty of the Natural State.”

So what do we need to know, as beekeepers and citizens?

First, use common sense to avoid them. Multiple stings from the Asian giant hornet are potentially lethal.

Secondly, if you think you have spotted an Asian giant hornet or a nest of them, contact the Arkansas Department of Agriculture’s apiary department at 501-225-1598, or by email at CAPS@agriculture.arkansas.gov. Let professionals remove the nest if deemed necessary.

Delicate balance
Invasive species are notoriously hard to stop because they have escaped their own natural enemies, which tend to keep their populations in check in their native territory.

“This is all just another reminder that even a very small thing can have an immense impact on the balance of nature,” Zawislak said. “There is typically a very narrow window of opportunity to recognize an emerging threat and to act quickly enough to eradicate it before it becomes widespread. An effective response requires a concerted effort between scientists, citizens and multiple levels of government agencies cooperating efficiently.”

Murder hornet methods
The hornets attack honeybees colonies in two ways. Individual hornets of multiple species, including those already present in Arkansas, may hover near the entrance of a beehive, waiting for a weary forager to return. Then the hornets swoop in, nab a tired honeybee, decapitate it with their powerful mandibles, and fly off with its headless corpse to feed the larvae in the hornets' nest. Once members of a hornets' nest learn where to find food, they may return often to this hunting ground in large numbers.

A queen bee can reproduce at an astounding rate of more than 1,000 eggs per day. It's likely that a colony has more than 1,000 bees dying of old age every day, so losing a handful more to hungry predators doesn't usually devastate the colony. But this is where the giant Asian hornets differ.

The Vespa mandarinia hornets will scout an area, and once they find a potentially rich hive, they mark it by secreting a chemical pheromone that other hornets recognize, and they spread it on or near the hive structure. They go home to their nest to recruit other hornets and then return in a large horde, able to zero in on the marked hive and decimate the entire bee colony.

This behavior is what concerns U.S. beekeepers. Because the hornets are so large, it may be possible to physically stop them from entering a beehive by securing the entrance with a screen that allows bees to pass but prevents hornets from entering. While this may protect the hive itself, it cannot stop hornets from preying on individual forager bees outside the hive. Also, retrofitting a protective gateway to every hive in giant commercial beekeeping operations would be expensive and time-consuming.

Honeybees themselves may prove to be their own best defense, Zawislak said. Different groups of bees in Asia have developed their own methods to combat these giant insect bullies.

Honeybee self-defense
Japanese honeybees are known to attack and kill individual scout hornets before they can return to their nest and bring back others. The bees do so by surrounding a single hornet en masse, a behavior called "balling" because it appears to be a ball of tightly packed bees.

The bees shiver their thoracic wing muscles to produce heat. The hornet, finding itself in the center of a mob of bees, will struggle and kick but will be overwhelmed by the sheer number of bees piling on it. Because the maximum lethal temperature for the hornet is lower than that of the honeybees, the bees literally cook the hornet to death.

“You have to hand it to the bees,” Zawislak said. “Despite the gloom and doom we have heard about the certain demise of beekeeping, these insects are survivors. Given enough time, they have always been able to work things out. Unfortunately, it can take thousands of generations to evolve suitable behaviors. Most of us don't want to wait that long, so we may need to intervene in the short term.”

The Washington State Department of Agriculture has created a webinar about the Vespa mandarinia biology, behavior, life history, and introduction into the Pacific Northwest. To learn more, visit https://www.youtube.com/watch?v=36TFu_W1Vio.