FAYETTEVILLE, Ark. — High throughput genetic analysis is a tool that allows researchers to analyze a lot of DNA data in a short period of time. The work is commonly done in a lab with scientific instruments. 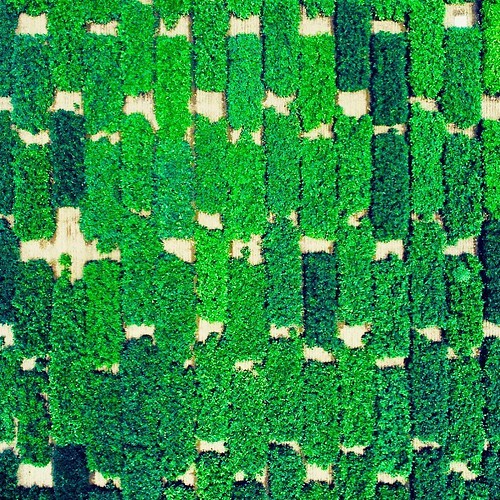 SHADES OF GREEN — Aerial images of soybean plots at full bloom (R2) showing differences among genotypes in the intensity of greenness, which is measured using the dark green color index. (U of A System Division of Agriculture image by Larry Purcell)

Larry Purcell uses it to evaluate thousands of agricultural test plots at once. He does it from a distance of 100 feet — straight up.

Using an off-the-shelf aerial drone, Purcell can identify those soybean plants that have the genetic make-up, or genotype, for high rates of nitrogen fixation. This biological function is important for producing grain with high protein concentration.

And he can do it in an afternoon.

Purcell is a Distinguished Professor of soybean physiology for the University of Arkansas System Division of Agriculture. He is also holder of the Altheimer Chair for soybean research at the Arkansas Agricultural Experiment Station, the division’s research arm.

Soybeans account for about $1.5 billion of Arkansas’ agricultural economy, according to the 2019 Arkansas Agriculture Profile, published by the Division of Agriculture (http://bit.ly/AAES-AgProfile2019).

The economic value of soybeans, Purcell said, comes from the oil and protein content of the seed. Higher concentrations of either of these, particularly with high yields, increases the value of a farm’s soybean crop.

What Purcell set out to do, in research supported by the United Soybean Board, was to identify soybean genotypes that are especially efficient in making their own nitrogen supply through nitrogen fixation. From those, he wanted to identify genetic markers that would indicate a plant’s ability to do this.

The research was recently published in Nature Scientific Reports, and is available online here: http://rdcu.be/b281f

To reach this goal, Purcell needed a lot of help. He enlisted Avjinder Kaler, a former graduate student in the University of Arkansas’ Dale Bumpers College of Agricultural, Food and Life Sciences and later a post-doctoral researcher for the Division of Agriculture. Kaler, now an adjunct professor at the U of A and a data scientist at Benson Hill, a crop improvement company in St. Louis, focused on the genetics work.

Purcell also had collaborators within the Agricultural Experiment Station, at the USDA Agricultural Research Service and the University of Missouri.

Soybeans are Arkansas’ number 1 crop, with more than 3 million acres planted in 2018 and bringing in around $1.5 million in cash farm receipts, according to the Arkansas Agriculture Profile published by the Division of Agriculture (http://bit.ly/AAES-AgProfile2019).

As in other crop plants, nitrogen is a key nutrient for protein production in soybeans, Purcell said. Most other crops require nitrogen fertilizer to acquire what they need. But soybeans are legumes, meaning that they accumulate nitrogen gas from the air and, through a symbiotic relationship with soil microbes, convert, or “fix,” it into a form the plant can use to grow and produce protein. In effect, they produce their own nitrogen fertilizer through nitrogen fixation.

“If a plant can access more nitrogen, that allows it to produce more protein,” Purcell said.

Nitrogen is a major component in chlorophyll and a plant enzyme known as RuBisCO, both key in producing fuel for plant growth and seed development.

Purcell wanted something faster and non-invasive, and that led him to drones.

In earlier research, turfgrass scientists Doug Karcher and Mike Richardson, professors in the Division of Agriculture’s horticulture department, demonstrated that the green shades of grasses, as measured by digital imaging, can be correlated to their nitrogen and chlorophyll content. They found that hue, saturation and brightness, or HSB — color values inherent in the images that are easily measured by photo editing and other imaging software — could provide consistent, accurate measurements of color values.

Karcher and Richardson used image analysis software that combined each of the HSB values into a single value that could be compared between turfgrass varieties and give an accurate indication of nitrogen and chlorophyll content. They call it the Dark Green Color Index, or DGCI, derived from HSB by a calculation that renders a value between 0 and 1.

The higher the DGCI value, the better the nitrogen concentration.

Purcell worked with Karcher to apply this imaging tool to assess the nitrogen utilization of corn plants, a research project Purcell is still pursuing with Division of Agriculture soil fertility scientist Trent Roberts.

DGCI was the non-invasive tool Purcell was looking for to measure the nitrogen concentration of soybeans plants.

But he didn’t want to analyze one plant at a time. Purcell wanted to screen many plants quickly. The changing position of the sun in the sky changes the quality and color of daylight throughout the day, and that makes a comparative analysis of multiple plants difficult, if not impossible. Useful digital image analysis means having to narrow the window of opportunity for image capture on any given day.

These 200 selections represented plants from 10 countries. “This collection is a source of genetic diversity from which we hoped to find desirable traits breeders can use to develop high-yielding varieties,” Purcell said.

Test plots from each genotype were planted in replicated research trials laid out at three Division of Agriculture research sites across Arkansas: the Milo J. Shult Agricultural Research and Extension Center in Fayetteville, the Pine Tree Research Station near Colt, and the Rohwer Research Station in Desha County. Each location offered a different environment in terms of climate and soil.

That’s a lot of ground to cover. Fortunately, Purcell had a solution. He pioneered the use of unmanned aerial systems, or drones, to screen large numbers of plants.

First, Purcell had to determine that the DGCI index from the soybean canopy of an entire plot was as meaningful as that from a single plant. That proved to be true.

With this tool in hand — or rather, in the air — Purcell screened those 200 genomes in replicated plots in three locations and identified those with the highest DGCI.

The next step was to identify genetic markers associated with high DGCI, Purcell said. Kaler obtained more than 42,500 single nucleotide polymorphisms, known as SNPs (commonly pronounced “snips”), for all 200 genomes from Soybase, an online database of genetic information funded by USDA-ARS.

A SNP is a single variation in the genetic code of an organism. A single SNP has a small effect on an organism’s appearance or function, but multiple SNPs can add up to significant differences in traits, like whether a plant does a better job of concentrating protein in its seeds.

They are also useful as genetic markers. Their presence in a crossbred plant can inform a breeder whether it inherited desired traits from its parents.

Out of those 45 SNPs, they identified 30 alleles, a technical term for variations of a particular gene, that are linked with an increase in DGCI value.

“It’s gratifying to see that we can use something as simple as an aerial photograph that reflects complex biochemical processes important for nitrogen fixation,” Purcell said.

The DGCI data Purcell accumulated helps breeders know which soybean genomes make good candidates for crossbreeding. And the genetic markers help them track which offspring from those crosses have the desired nitrogen fixation trait.