FAYETTEVILLE, Ark. — When Pete Hornsby accepted the position to manage a beef research facility at Monticello for the University of Arkansas System Division of Agriculture, he figured it would be about a five-year gig. 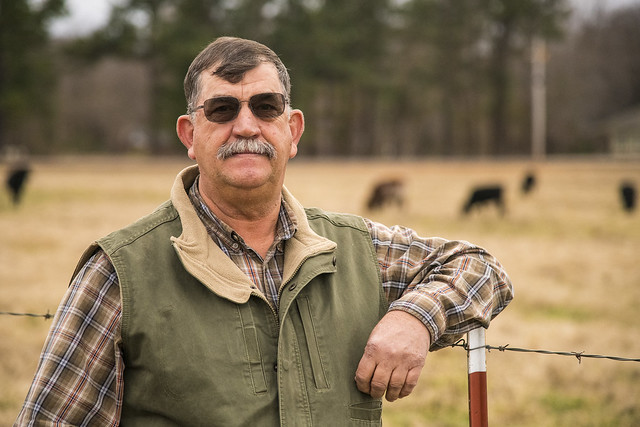 Hornsby retired Jan. 3 after 42 years with the division’s Arkansas Agricultural Experiment Station. So, his math was off a bit.

“When I began back then, I figured I’d work five years and make all my mistakes at their expense,” Hornsby said. “Here, 42 years later, I’m still learning from my mistakes.”

When Hornsby was hired by Hayden Brown, a professor of animal science, he was the first Division of Agriculture employee to work at Monticello, which later became the location of a division research and extension center and the Arkansas Forest Resources Center. Brown was the first of only two supervisors to whom Hornsby reported during his time with the division. Beth Kegley, professor of animal science, became his supervisor in 1997.

“Pete was invaluable,” Kegley said. “He has a tremendous bank of practical knowledge about beef cattle, forage production and farm management.”

The job in Monticello came at a fortuitous moment.

Hornsby graduated from the University of Arkansas in 1977 with a degree in animal science from what would become the Dale Bumpers College of Agricultural, Food and Life Sciences. He returned to his family’s cattle farm at DeQueen, but times were especially hard in agriculture at that time and he quickly realized the farm wouldn’t support two families.

He worked nine years at Monticello and then transferred to northwest Arkansas to manage the Experiment Station’s purebred cattle farm at the Savoy Research Complex, about 12 miles west of Fayetteville. “We had six different purebred herds at that time,” he said.

The Savoy facilities had been built in the 1950s and Hornsby planned and made improvements to them. “Hopefully, I left it better than I found it,” he said.

When a stocker cattle receiving and backgrounding program was added in 1997, management of the herds was split and he elected to take on the stockers. It was a new program that had to be built from the ground up and Hornsby had the opportunity to design the facilities from scratch.

“Stockers come with a host of new problems,” Kegley said. “That’s why I began research work on them, and it was something completely new for us then.”

Kegley said Hornsby was always willing to take on new things. “He never blinked,” she said. “He was always game, and he did everything out there for the stocker operation. He had the complete package of skills to handle that job.”

Kegley said he never shied away from suggesting a better way to do something. “Working with Pete was a true collaboration,” she said.

That dedication and collaboration were key when Kegley wrote a support letter for a nomination that led to Hornsby receiving the Division of Agriculture Non-Classified Support Personnel Award, the division’s highest staff award, in 2007.

“It was a lot of fun,” Hornsby said. “I was able to use a lot of my ideas based on my experiences by then. And we built most of those facilities ourselves.”

Hornsby said he never got tired of coming to work. “I got up every day and got to do what I wanted to do,” he said.

“There was something happening all the time,” Hornsby said. “I was involved in hundreds of research projects that I enjoyed and was able to make a contribution.”

He said he’s also proud of the many Bumpers College students who worked with him at Savoy and went on to successful careers. “They saw real-world applications of what they were learning in the classroom,” he said.

Hornsby married his wife, Jeannie, in 1979, after she graduated from the U of A. Jeannie still works in the department of animal science.

In retirement, he keeps busy on his cattle farm in western Washington County. Hornsby said he also plans to travel and spend time with his grandchildren.