By Ryan McGeeney
U of A System Division of Agriculture
Jan. 6, 2020

DUMAS, Ark. — About 200 farmers, consultants and other agriculture industry professionals attended the 64th annual Tri-State Soybean Forum on Jan. 3, taking stock of both the good and bad in soybean production in Arkansas, Louisiana and Mississippi. 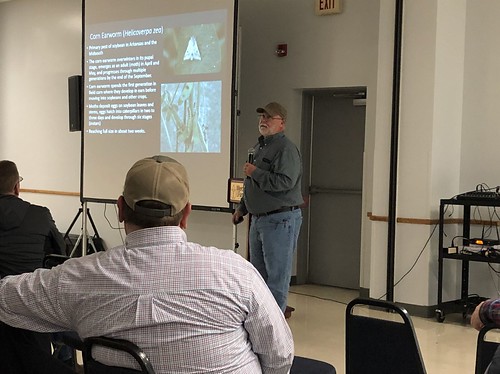 The forum, held this year at the Dumas Community Center in Dumas, Arkansas, was sponsored by the Arkansas Soybean Promotion Board as well as the land grant university systems in the three participating states, which together produce a substantial portion of the country’s soybean crop. Kevin Norton, staff chair for the Ashley County Cooperative Extension Service, served as the 2020 forum chairman.

While standard issues of agronomy — seeding rates, marketing, pests and so on — have always been important topics of discussion, Bob Stark, professor of agriculture economics for the University of Arkansas at Monticello and secretary-treasurer for the forum, said two issues seemed to predominate this year’s meeting: The immediate past, and the immediate future.

“2019 was such an anomaly — hopefully an anomaly — from the flooding and late planting to the difficult harvest,” Stark said. “It was a really, really challenging year. Looking forward to 2020, trade policy is something that’s still unclear at this time.

“I think farmers, and the industry as a whole, are looking forward to a more typical year in production and marketing, both domestic and foreign,” he said.

Hank Chaney, area agriculture and natural resources specialist for the University of Arkansas System Division of Agriculture, said the same weather patterns that made 2019 so arduous for Arkansas growers affected Louisiana and Mississippi as well. Nevertheless, average soybean yields throughout the region proved better than feared.

“A lot of acres that would have been seeded in other crops were either ‘prevent planted,’ or went into soybeans” Chaney said. “Better-than-anticipated yields were cut on some of the later beans. Then we had that hot, dry drought at the end of the year; I think if we could’ve gotten a rain or two — the yields were good, but they could’ve been better. But all three states said their yield was going to average to about 50 bushels per acre, which isn’t bad, considering everything that happened.”

As the ongoing trade dispute between the United States and China continues, growers will likely consider overall market conditions in preparing their crop budgets for the 2020 planting season, Chaney said.

“Price is always the driving factor behind what gets planted,” he said. “If corn looks good, going into the seasonal shift, you’ll see more of it. Bean acreage will probably be at or maybe a bit below what it was last year.”

Scholarship recipients from each of the three participating states were named during the forum. The winners included:

Scholarship funds are provided by the Tri-State Soybean Forum.