LITTLE ROCK — Arkansas pasture managers, cattle producers and other growers may be noticing their bermudagrass turning purple — and are trying to root out the cause, John Jennings, extension forage specialist for the University of Arkansas System Division of Agriculture, said. 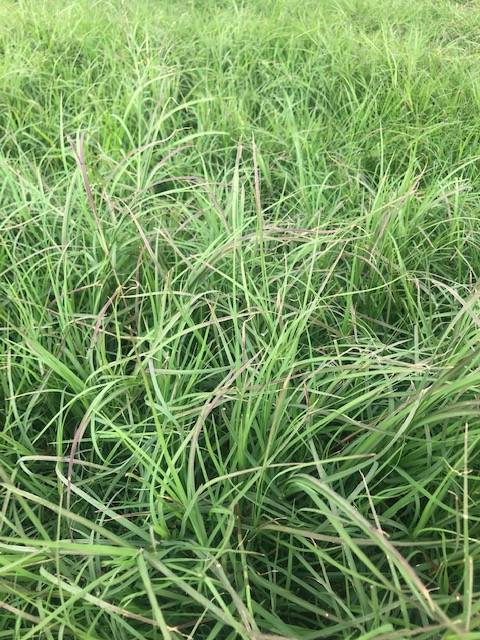 THE PURPLING — Arkansas pasture managers, cattle producers and other growers may be noticing their bermudagrass turning purple — and are trying to root out the cause. (Image courtesy Jerri Lephiew.)

“The evidence indicates that many cases involve well-managed hay fields,” Jennings said. “Many of these fields were treated for winter weeds and fertilized to support early bermudagrass growth.”

In many cases, he said, no obvious insect problems have been reported. Soil fertility is variable among cases, so from there, the evidence goes cold.

“Let’s examine the physiology of the victim — the bermudagrass itself,” Jennings said.

Bermudagrass is a warm-season grass, which grows best at temperatures above 85 degrees. Green leaf tips always show up in March, especially when there is no burden of winter weeds to block sunlight.

But it takes a series of consecutive warm nights above 60 degrees to get the internal machinery of the grass working efficiently, Jennings said.

“Early on, the bermudagrass will start to grow on warm days, then gets shut down when temperatures drop back,” he said. “Night temps in the 40s shut down growth for several days. It’s a bit like trying to start a cold engine - it hits, sputters, hits, then finally starts sluggishly.”

Jennings pointed out that a possible clue: In late March and into early April, temperatures rose above 80 degrees. The rising temperatures likely prompted many producers to fertilize fields to push the bermudagrass out of dormancy for early growth.

Temperatures then took a dive for several days, and warmed back up just before Easter, Jennings said.

“It was as if spring had finally sprung, and then ‘blackberry winter’ hit right about Easter,” he said, with temperatures dropping and frost occurring in northern areas of the state.

“Blackberry winter is an old-timer saying referring to the often-annual event, when spring temperatures suddenly drop just about the time the blackberry briars start blooming,” Jennings said. “The tender growth of the bermudagrass, fueled by sunlight and fertilizer, suddenly sputtered and stalled.”

“Purpling” is often due to accumulation of anthocyanin pigments due to stress, he said. It is frequently associated with cold-weather-induced phosphorus deficiency. Plants normally grow out of it when warmer weather arrives.

1. Controlling winter weeds is a good practice to allow more sunlight to reach the grass and to warm the soil.

2. Temperatures frequently turn cold sometime during late March and early April, which can stress the plants being pushed out of dormancy early.

3. Don’t apply nitrogen fertilizer too early in spring to warm-season grasses — wait for a week of night temperatures of 60 degrees.