FAYETTEVILLE, Ark. — Improved carbonation techniques from the University of Arkansas System Division of Agriculture could pay bubbly dividends for craft beer brewers in the state. 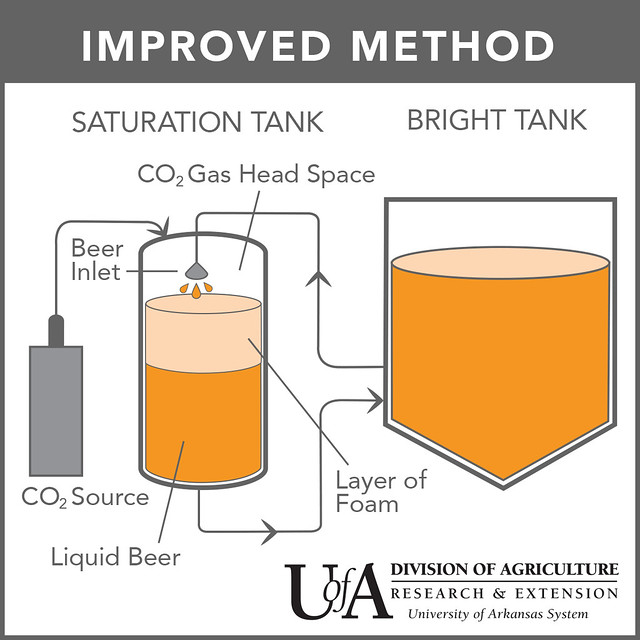 Carbonation is a critical step in the beer brewing process, said Scott Osborn, associate professor of biological and agricultural engineering for the Arkansas Agricultural Experiment Station, the research arm of the Division of Agriculture. For craft brewers, achieving the correct level of carbon dioxide is a time-consuming and expensive operation.

Osborn developed a new carbonation method that could simplify the once labor-intensive process and reduce the amount of carbon dioxide leaked to the atmosphere. This technique may also mean a better tasting beer.

Core Brewing and Distillery Co., a Springdale, Ark., craft brewery, gave Osborn an opportunity to test the system in a production setting.

Osborn started looking at issues with the craft brewing carbonation process in 2015, he said. His research interests include evaluating systems for dissolving gases into liquids. This expertise naturally applied to tackling a costly carbonation problem for craft beer breweries.

Carbonation is one of the final steps for craft brewers. Breweries traditionally carbonate beer in a large tank, called the bright tank. This is a temperature-controlled vessel where beer is stored in preparation for packaging. CO2 is introduced through a metal device called a “carb stone” that releases tiny bubbles of carbon dioxide into the beer. But much of the gas can escape into the air, Osborn said.

“They can waste up to about half of the CO2 that they are buying,” Osborn said. “That is not only wasted expense, but also a greenhouse gas.”

When the gas leaves, it can also strip out flavor volatiles that give beer subtle tastes, Osborn said.

The carbonation process has to be conducted with careful monitoring of CO2 concentration to achieve the desired level of carbonation while avoiding over-carbonation.

In the process developed by Osborn, beer is pumped from the bright tank into another tank pressurized with CO2, inducing carbonation. Bright tank pressure is measured continuously with a pressure gauge, and this value is entered into an equation to calculate CO2 concentration, eliminating repeated and costly testing for carbonation levels.

The reading can also be automated so that a computer can shut everything off, Osborn said.

Core Brewing has been integral to developing the technology, giving input on how the operations work and how much automation they want, Osborn said.

“There is a lot of art and craftsmanship in craft brewing,” Osborn said. “Brewers want a connection with their process, they do not want computers making it.”

“We are a craft brewery to our core,” said Jesse Core, founder of the company that bears his name. “We thrive on innovation. As far as carbonation, there is nothing craft about it. The goal is to carbonate the product faster and reduce waste.”

Osborn wants to see if there is a flavor difference between the traditional carbonation method and the new one. “In theory, there should be more flavor volatiles left in the beer,” he said.

Planned taste-testing research is on hold during the COVID-19 crisis, said Han Seok-Seo, associate professor of food science and director of the Agricultural Experiment Station’s Sensory Science Center. Seo said the design of the flavor experiment was an undergraduate thesis project of Kira Simonson, an honors student in the University of Arkansas’ Department of Biological and Agricultural Engineering.

Simonson’s design called for a panel of taste-testers to sample beers made with both carbonation processes to see if they could be differentiated and, if so, which was preferred by panel tasters.

The technology is not yet available for the brewing industry, Osborn said. The process has been patented and he wants to build a commercially functional, food-grade carbonization unit that can serve as a model for interested breweries. He was awarded a U of A Chancellor’s Fund grants for Innovation and Collaboration, and Commercialization to support this next step.

Once completed, the unit can be tested in a few local breweries, Osborn said. Data collected from those tests should demonstrate the cost savings and quality of the process, and maybe even flavor benefits.

“In order for this technology to gain widespread adoption,” Osborn said, “it will have to prove to be a significant improvement over existing methods with regard to cost, convenience, and/or final beer quality. That will require data and testimonials from happy users as well as an installed base of several units that are operating satisfactorily.”

Meanwhile, the Core Brewing team is working to implement Osborn’s carbonation method in a production environment. The new method saves time, gas and money, which are all wins for the company, Core said.