FAYETTEVILLE, Ark. — Rice blast is the most devastating rice disease in the world, causing the loss of 10 percent to 30 percent of the planet’s crop every year. 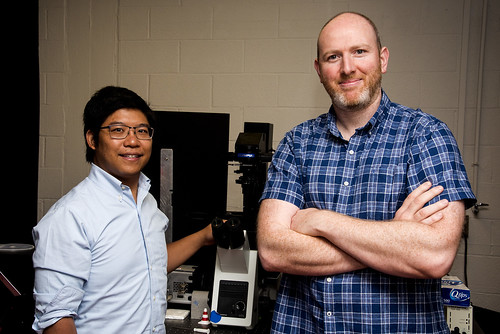 The disease is a serious and costly problem for Arkansas rice growers, who produce about half of the rice grown in the U.S., Egan said. Blast can reduce both grain yield and quality, he said.

Rice farmers fend off blast by planting disease resistant varieties and spraying fungicides, Egan said. Both strategies are likely to become ineffective as the pathogen adapts to overcome blast resistance and develops tolerance to the fungicides. Eventually, new classes of fungicides will need to be developed to overcome resistance in the pathogen.

That work will be difficult without an understanding of the cellular functions used by the fungus to infect rice plants, Egan said.

Egan received a $110,332 grant from the U of A Chancellor’s Innovation Fund to investigate the microbiological cell functions of the blast fungus — known as Magnaporthe oryzae— that allow it to infect rice plants.

Egan said M. oryzaespores are carried the wind. When they come in contact with rice plants, they can “glue” themselves on tightly and attack the plant with a specialized cell called an appressorium.

The appressorium builds turgor pressure, a powerful type of hydrostatic force, that drives a kind of “infection peg” through the plant’s cuticle, Egan said.

One of the things that makes this intrusion possible, Egan said, is a ring-shaped structure called a septin ring. The blast spore produces filaments composed of septin, a class of protein. The filaments grow into a ring structure at the point where the appressorium is attached to the plant.

The septin ring was discovered and described by a research team led by Nick Talbot, professor of molecular genetics at the University of Exeter in the United Kingdom, where Egan earned his undergraduate and doctoral degrees and served as a postdoctoral research associate.

“The septin ring is essential for infection,” Egan said. In experiments in which the septin ring was disrupted, the blast fungus was unable to infect the rice plants.

Egan has focused his investigation on understanding the septin ring. “How does the ring form in the right place at the right time to allow the fungus to penetrate and infect the plant?” he asked.

In the research supported by the Chancellor’s Fund grant, Egan and co-investigator, Yong Wang of the U of A department of physics, will be looking for other proteins that play a role in controlling or regulating the septin filaments that build the septin ring.

“Plants don’t have septins,” Egan said. “So, if you can target and disrupt the septin ring or a protein that is essential for formation of the septin ring, you can prevent blast infections without causing damage to the plants.”

The general outline of the septin ring can be imaged now using spores modified with a gene that produces fluorescence in the ring, Egan said. Images produced by digital microscopy can show the shape of the ring. But most of these systems can only resolve an image down to about 200 nanometers, or about 200 billionths of a meter. That’s enough to see shape, but not structure.

Wang employs “super-resolution fluorescence microscopy” that can resolve images down to 20 nanometers.

“We will, for the first time, resolve the nanoscale organization of the septin and cellular cytoskeleton during key stages of appressorium formation,” Egan said. “It will give us valuable new perspective into their organizational dynamics.”

Egan and Wang plan to use an innovative approach to understanding how all the proteins involved in the appressorium function to produce the septin ring.

“Once we can describe what the septin ring looks like in detail,” Egan said, “maybe we can identify other proteins that control or regulate its assembly.”

Egan said practical applications of the results of this investigation will be well down the road. “This is very basic knowledge,” he said.

Applicable science — the kind that leads to new technology and solutions to problems — is built on a foundation of basic research like Egan’s and Wang’s. Understanding the cellular and protein mechanics of blast infection can lead to the solutions that protect global food security.

Egan emphasizes that he is not designing new fungicides for blast control.

But agricultural chemical companies may one day use the fundamental knowledge his research produces to develop a new generation of fungicides that control a devastating rice disease without having negative impacts on plants or other organisms.

Bumpers College provides life-changing opportunities to position and prepare graduates who will be leaders in the businesses associated with foods, family, the environment, agriculture, sustainability and human quality of life; and who will be first-choice candidates of employers looking for leaders, innovators, policy makers and entrepreneurs. The college is named for Dale Bumpers, former Arkansas governor and longtime U.S. senator who made the state prominent in national and international agriculture.By Mary Hightower