By Mary Hightower
U of A System Division of Agriculture
Oct. 18, 2018 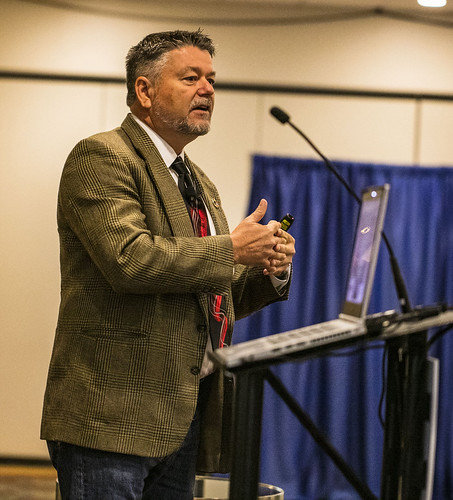 Matlock, an advocate for the role of science in defining and measuring success in agricultural and food system sustainability, was honored by CAST on Wednesday. The award is named for Norman Borlaug, an agronomist who earned a Nobel Peace Prize, World Food Prize and the Presidential Medal of Freedom for his work.

Matlock is director of the Resiliency Center at the University of Arkansas, and a professor of ecological engineering in the department of biological and agricultural engineering. While at Texas A&M, Borlaug advised Matlock through the first four years of his academic career, encouraging him to explore the complex intersection of community poverty, food, and water—these are now focal issues for the University of Arkansas Resiliency Center.

Following acceptance of the award, Matlock presented “The Promise of Prosperity from the Land in the 21st Century.” His wide-ranging talk included the changing role of women in agriculture, the need to redesign what he said was an agricultural system that dated back to the 1940s and even the definition of “prosperity.”

“The promise of prosperity from the land is really in the promise of human well-being. … Prosperity is not wealth. Prosperity is well-being,” Matlock said, noting that some of the happiest people are in places that aren’t necessarily the wealthiest. ”Social connections are the keys to that happiness.”

Matlock noted that we are “54 percent urban as a species now. This very urban agriculture is the key to our future prosperity.”

“I’m pleased to see Dr. Matlock receive this award,” said Mark Cochran, a member of the CAST board of directors and vice president-agriculture for the University of Arkansas System. “He’s a scientist of international renown, an effective communicator and a champion for the role of science in food and agriculture systems.”

In introducing Matlock, Cochran said “he has been tireless, innovative and persuasive in his efforts to bring a science foundation to the definition of agricultural sustainability, and empirical measures of continual improvement.”

CAST announced Matlock’s honor in April, the result of a nomination by Lalit Verma, head of the department of biological and agricultural engineering, at the University of Arkansas.

Over the past six years, he has participated in more than 116 keynote presentations, discussion sessions, and video interviews. Since 2011, he has published 19 peer-reviewed manuscripts, co-authored two books and six international policy reports, been awarded three U.S. patents, and received more than 15 professional leadership awards.