No one’s been pruning your trees, Arkansas: It’s just the twig girdler

By Ryan McGeeney
U of A System Division of Agriculture
Oct. 12, 2018

LITTLE ROCK – Across Arkansas, a state in which both forested and urban areas have more than their fair share of hickory, pecan and persimmon trees, by any measure, some homeowners have become alarmed at collections of twigs and small branches found around the base of these trees on their property — cut so cleanly from the tree that it surely must’ve been the work of an uninvited arborist. 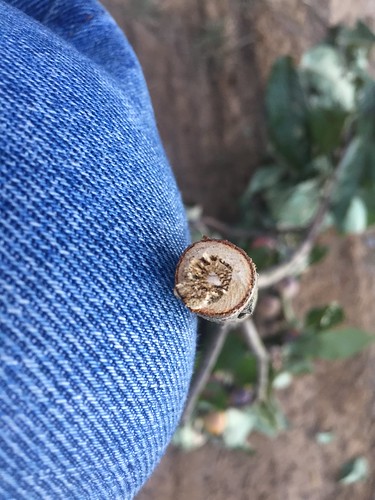 But let’s not take up arms just yet.

“It looks like some gardener has been after their trees with pruning shears, because the cut’s almost perfect,” Tamara Walkingstick, associate director for the Arkansas Forestry Research Center and associate professor of forest resources, said. “But it’s just a little insect.”

The twig girdler, so named for its apparently sheering ways, in a long-horned beetle, native to Arkansas and much of the surrounding region. During its reproductive process, the girdler works its way about halfway through the diameter of a small branch and lays its larvae there. As the larvae begin to pupate, the branch or twig falls to the ground, where the larvae continue to grow throughout the year.

“There’s really no real damage to a tree unless it’s young, in which case it can destroy the form,” Walkingstick said. “Maybe you’ve just planted a pecan tree, for example, and it’s just now 3 feet tall, and a little twig girdler comes along, and all of a sudden the tree is back to being 1 foot tall.”

The insect has an approximately one year life cycle.

There is no recommended preventative measure — chemical, cultural or otherwise — for dealing with girdlers already in the trees. The only thing landowners can really do, Walkingstick said, is to dispose of the twigs on the ground, where the next generation is plotting its moves for the following year.

“People don’t need to do anything about this pest,” she said. “The best thing for people to do is to gather the twigs from the ground and destroy them, so the larvae aren’t coming out again. But there’s no need to do so.

“It’s not really damaging the tree,” she said. “This late in the season, the trees are beginning to go dormant anyway.”

To learn about insects in Arkansas, contact your local Cooperative Extension Service agent or visit www.uaex.uada.edu.