By Sarah Cato
U of A System Division of Agriculture

MANILA, Ark. – Empty main streets, rundown buildings and abandoned business are sights many rural Arkansas citizens know all too well. With younger generations gravitating toward bigger cities, many rural towns just don’t see the revenues they used to. These are the factors that brought about Moving Manila Forward, a new organization that aims to keep Manila beautiful and thriving. 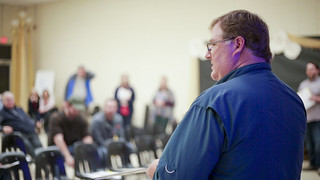 What started as the Manila Pilots Association seeking help for airport improvements turned into a communitywide effort to bring hometown pride back to Manila. The Manila Pilots Association reached out to the Cooperative Extension Service, part of the University of Arkansas System Division of Agriculture, and Mississippi County Extension Staff Chair Ray Benson, himself a pilot.

“The Manila Pilots Association met one afternoon and asked if there could be a way, through extension, that they could ask for help for the airport. To make it more visible, or to attract businesses,” Benson said. “Over the course of a few weeks, they recognized that the community and the airport are too intertwined to separate. They asked if we could grow this into a community project.”

After realizing the importance of the community to the airport and vice versa, Benson mentioned the Cooperative Extension Service’s Community and Economic Development department and its Breakthrough Solutions program. Breakthrough Solutions has helped communities such as the city of Harrison and Cleveland County reinvigorate their economies and get people working together toward common goals. With help from the Mississippi County Extension service, Benson and the Manila Pilots Association got the ball rolling. Jason Bennett, Activities Director for Manila Pilots Association said focusing on working hand in hand with the community became an integral part of their efforts.

The airport participated in many events that promoted the growth of the community.

“We’ve had movie nights, we had 300 pounds of fresh shrimp flown in for a cookout. Just coming up with ideas to promote Manila and its airport,” Bennet said.

The survey brought 330 responses, many with overlapping answers. Cleaning up the town, improving cell service, Wi-Fi, and sewer and water were the biggest responses. The feedback encompassed not only what people wanted to see done, but also expressed their affection for their hometown.

“We got a lot of feedback about what things people loved about this town,” Fleeman said. “It has that small hometown feeling that everyone loves to be a part of.”

Fleeman said the positive responses made him realize that there were many citizens who wanted to make a difference, they just didn’t know how.

“I think the main thing we came to a consensus on was that we love the city and we love to push the town as far as we can, but there was never a central hub for everything to come together,” he said. “With Moving Manila Forward we are that central hub where everyone could come and share their ideas. People wanted a catalyst for change.”

The young people in the community were given a voice as well. High school principle Mark Manchester said he knows the importance of keeping teenagers and young adults involved in projects this big.

“To really make a community great, it’s the young people that are the backbone of that effort,” he said. “We want to include the school in every event that Moving Manila Forward has and strengthen that bond.”

Manchester said the kids at Manila High School have big ideas for dressing up their town.

“One of the things the students are very good at is coming up with ideas for landscapes and things like that,” he said. “And we’re working hand in hand right now with our Manila High School Garden Club to try to get a community garden.”

He added that Manila students can contribute the technological skills they’ve learned.

“We have a top-notch computer science program here at the school,” Manchester said. “We have coding classes and our students actually won a statewide app development contest last year. We have a strong EAST program that has the ability to develop many different types of multimedia displays and social network options.”

Whether it’s through photography, app development or website building, these students have the high-tech knowledge to assist where needed.

In addition to the fresh ideas these students bring to the table, keeping young people involved in their community can keep them invested in the town even after graduation. Fleeman says keeping the younger generations in Manila is a challenge the town has faced for a long time.

Most of the current projects are still in the planning stages because the group is still new, but changes are definitely in the works. Donna Jackson, with Manila Museums, said they’re taking small steps in getting the town cleaned up.

“The city has hired a new code enforcement officer and we’ve been dealing with him about some things we can do to make our city more attractive,” she said. “Not just to new people, but to the people who are here to take pride in it. I think that pride will be contagious.”

Tandee White, community development program manager at Entergy Arkansas spoke on the importance of what the city of Manila is doing with Moving Manila Forward.

The citizens of Manila have definitely been given a voice. Chairman Fleeman said the community involvement itself is enough to be proud of.

“We see that fire in people that we haven’t seen in a long time,” he said. “We really love seeing people getting excited about their hometown again.”

The Cooperative Extension Service
U of A System Division of Agriculture