By Mary Hightower
U of A System Division of Agriculture
Aug. 17, 2018

LITTLE ROCK – Artificial intelligence, blockchain and robotics are all powerful new technologies that are not only making changes in agriculture, but are also plowing up new legal issues for attorneys, state governments and producers, presenters said during a national ag tech and law conference. 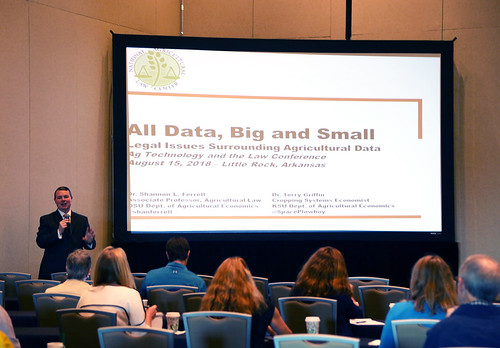 The first-of-its-kind conference, Ag Technology and the Law: Advancing American Agriculture, was held Aug. 15-16 at the Statehouse Convention Center in Little Rock. The conference, which drew representatives from 35 states, was sponsored by Arkansas Attorney General Leslie Rutledge, the National Agricultural Law Center  and the National Association of Attorneys General.

Arkansas Attorney General Rutledge welcomed participants on Wednesday by reinforcing the importance of agriculture, something she has learned from her personal experience and during her Rutledge Roundtables, annually held in all of Arkansas’s 75 counties.

“Meeting with Arkansans face-to-face each year, including more than 400 farmers, I have heard first-hand about issues with feral hogs, dicamba drift, black-headed buzzards, Waters of the U.S. and many other issues,” said Rutledge. “As leaders, we need to learn about the regulations which impact farmers and ranchers and do more to encourage the next generation to get into farming.”

Rutledge grew up on a cattle farm near Batesville. She and her husband have a row crop farm in Crittenden County.

“This was a tremendous opportunity for attorneys general across the country to network, exchange ideas and compare notes on how each state deals with similar legal issues,” said Harrison Pittman, director of the National Agricultural Law Center.

"We're honored to have co-hosted this great event, and especially thank Attorney General Leslie Rutledge for her leadership in helping forge our partnership with the National Association of Attorneys General,” Pittman said. “We also thank Gov. Hutchinson for delivering an excellent keynote address to attendees from nearby three dozen states.”

Ag data was No. 1 on Janzen’s list. Today’s farmers collect data on yield, fertility, moisture  and other stats. This creates issues over who owns the data collected – is it the farmer, the software/sensor maker or the equipment maker? Privacy, control, transfer and sale of that data are also legal issues the industry needs to pay attention too.

Autonomous vehicles clocked in at No. 3. “Companies like Tesla and Google are working on its autonomous driving equipment that will trickle down to farm equipment too,” Janzen said. What happens when a driverless piece of farm equipment “takes out the neighbor’s garden? Who’s liable for worker safety?”

Machine learning or artificial intelligence, No. 5 on Janzen’s list, brings with it questions about “ownership of learned knowledge.” Blockchain, No.6, is “either going to revolutionize everything or do nothing, or something in between.”  He noted that while blockchain promises a secure chain of custody, it’s only as good as the information that goes into the system.

“At the end of the day, it does come down to a human element,” Janzen said. “There can still be fraud.”

Technology was the theme for Gov. Asa Hutchinson’s keynote speech Thursday. He told the audience that the state had money to “devote to a technology accelerator program in the field of agriculture.” Hutchinson also said he was keen on blockchain and “we want to capitalize on that technology to give us a market advantage.”

Ferrell noted that most farmers aren’t aware that their tractors have been talking to their manufacturers since 2009.

He defined all data as that collected from individual field or individual farm including “your combine’s harvest monitor, yield data, your soil maps, as-applied fertilizer map. Anything localized.”

When it comes to ag data, large or small, “there’s a lot of catching up to do from a law standpoint,” Ferrell said. “It’s almost impossible to get rid of data that’s out there.”

Ferrell told the audience that “we have got to do a lot of education to our farmers and ranchers out there” where ag data is concerned and urged ag professionals to read their service agreements.

She said the case was not isolated. “This can happen just down the street. Don’t assume that because we’re middle America, that this cannot happen here. If you have something of value, especially in the ag department, someone will try to steal it.”

Nicholls urged ag professionals to contact the FBI sooner rather than later if they stumble across something suspicious.

The University of Arkansas System Division of Agriculture is an equal opportunity/equal access/affirmative action institution. If you require a reasonable accommodation to participate or need materials in another format, please contact your (insert appropriate office) as soon as possible. Dial 711 for Arkansas Relay.