Movie about GMOs and food separates hype from science

By Fred Miller
U of A System Division of Agriculture
Sept. 29, 2017

FAYETTEVILLE, Ark. — A movie aiming to set the record straight about GMOs and food will be shown at the University of Arkansas Oct. 18. 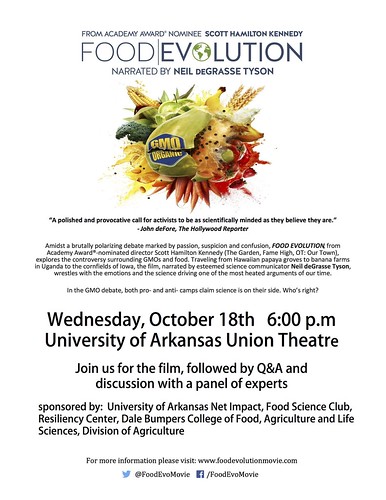 A panel and audience discussion and reception will follow the movie, which begins at 6 p.m. in the Arkansas Union Theater.

A description from the film’s producers says, “Traveling from Hawaiian papaya groves, to banana farms in Uganda to the cornfields of Iowa, the film wrestles with the emotions and the science driving one of the most heated arguments of our time.”

The film features expert opponents and proponents of GMO technologies, as well as farmers and scientists from around the world.

Richard Abramowitz of the film’s distributor, Abramorama, says, “We are eager to introduce Food Evolution to this essential conversation, one in which emotion often overtakes information. Scott Kennedy’s always entertaining deep dive into the science of GMOs is going to change some minds.”

The movie trailer for “Food Evolution” can be watched at http://​bit.ly/FoodEvoFilm