By Emily Thompson
U of A System Division of Agriculture
Sept. 22, 2017 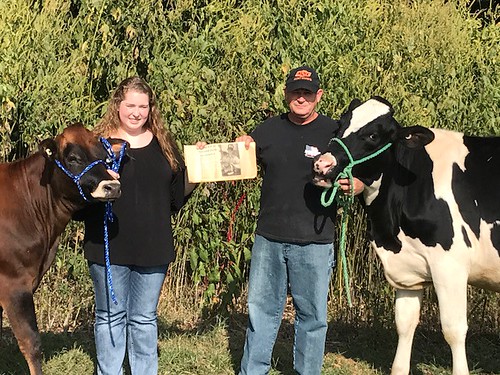 In 1977, a then 17-year-old Jim was chosen to attend the National 4-H Dairy Conference in Madison, Wisconsin. Exactly 40 years later, Julie will go to the same conference. Julie’s two older brothers, Jessie and Lee Griffin, also attended the conference when they were in high school.

“It runs in the family,” said Jim. “It’s just something we do. We try to be the best at what we do, even if that means going to conferences.”

Julie Griffin has been an active member of Benton County 4-H for 11 years. She shows dairy cattle, enjoys participating in 4-H baking contests and her 4-H 4-H dairy quiz bowl team will also be going to nationals this year. Julie has served as the Arkansas Farm Bureau’s Arkansas Dairy Ambassador this year and last and is also a member of FFA.

Julie is one of two 4-Her’s chosen through an application process to represent Arkansas at the conference. Tanner Riddle, from Van Buren County, will also be attending the conference in October. Both their trips will be funded through the University of Arkansas System Division of Agriculture Animal Science Department.

Julie said she’s most excited to tour different dairies and meet others that share her interests. 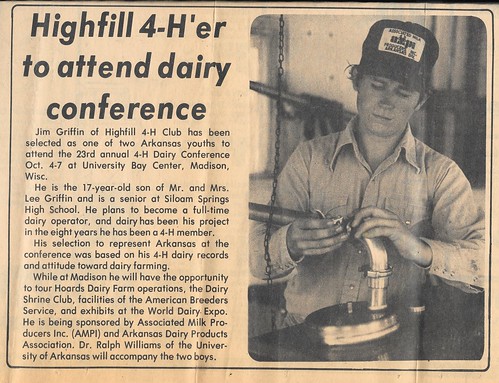 “I’m looking forward to meeting people from across the country,” Julie said.

Jim said he hopes that Julie will gain valuable experience that will help her with her future studies at the conference. Julie plans on going to college to either pursue a degree in dairy science or veterinary science.

“I’m just not sure yet,” she said about her college major.

The conference will take place in Madison, Wisconsin, again this year and attendees will tour ABS Global, Hoard’s Dairyman, the National Dairy Shrine and the National Dairy Expo—many of the same dairy landmarks that Jim toured four decades ago.

“It’s an opportunity for 4-Her’s to learn more about themselves and potential career paths,” Ahrens said.

Jim said while he enjoyed the tours, his favorite part was the flight to the conference.

“My favorite memory would be that it was first time to fly,” Jim said. “They flew us out of Little Rock.”

Ahrens said that’s another benefit of 4-H events like the National Dairy Conference, it gives youths a chance to venture outside of Arkansas, something that many don’t have the opportunity to do.

“It gets them out of the state and see what the agriculture community offers beyond Arkansas,” Ahrens said.

The dairy industry in Arkansas has been in a sharp decline in recent years. In 1989 there were 852 dairy farms in Arkansas. Now there are fewer than 100.

This isn’t just happening in Arkansas. The decline in dairies is occurring nationwide.

Ahrens said one reason for the decline is that there aren’t many young people willing to take over the family farm.

“The amount of time and effort it takes to run a dairy is tremendous,” Ahrens said. “Nowadays, a lot of kids don’t want to go back to the farm because it’s not profitable.”

Jim, who had to make the tough but necessary decision to close the family dairy in the early 2000s, says Arkansas dairies aren’t able to produce enough to meet milk demand.

“I think it’s our milk marketing,” Jim said. “We can’t keep up with supply and demand.”

The shrinking dairy industry is one of the reasons Julie said she wants to attend the National 4-H Dairy Conference and other events like it.

“The dairy industry is going downhill in our state,” Julie said. “I want to show and educate people about dairy to hopefully see the industry thrive again.”

The University of Arkansas System Division of Agriculture’s mission is to strengthen agriculture, communities, and families by connecting trusted research to the adoption of best practices.