By Mary Hightower
U of A System Division of Agriculture
Sept. 15, 2017

JONESBORO, Ark. – The damage and disruption caused by Hurricanes Harvey and Irma have long effects, rippling into slowed exports, higher fertilizer and diesel prices and a likely rise in demand for Arkansas forest products, said economists with the University of Arkansas System Division of Agriculture. 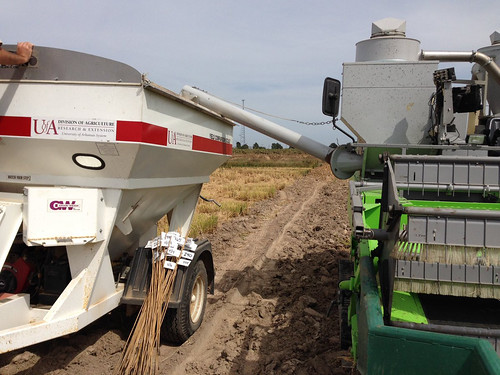 Both Harvey and Irma hit ag where it hurt. Wind and water ruined harvested crops and spawned wet cattle drives in Texas. Where harvest had not occurred in states like Arkansas, the two storms caused flooding, crop lodging or otherwise brought too much of something that wouldn’t be helpful in the end stages of the growing season.

As the shipping industry moved to secure itself against Harvey, commodity movement saw some disruption.

The good news is that “as far as ag infrastructure goes, grain elevators, nitrogen plants and shipping infrastructure at the Louisiana Gulf was largely undamaged by Hurricane Harvey,” said Scott Stiles, extension economist for the University of Arkansas System Division of Agriculture.

“Rail movement is recovering and shipping traffic re-opened through the Houston Ship Channel and the Ports of Houston and Galveston on Sept. 1,” he said. “But, certainly in the week following Hurricane Harvey export shipments of commodities were noticeably slower.”

Thursday’s Export Sales report from the U. S. Department of Agriculture showed there were signs of recovery with combined shipments of rough rice, soft red winter wheat, corn, sorghum and soybeans to Mexico rebounding 64 percent.

“Even though most facilities and infrastructure were spared from damage, hurricane activity has disrupted loading and unloading at the gulf,” Stiles said. “Industry sources indicate there are not many urea imports headed to the gulf at this time. This has wholesale, or “barge,” nitrogen prices creeping higher over the past week.”

Flooded highways, closure of shipping ports and pipeline and refinery shutdowns all contributed to supply chain disruptions. “As a result, U.S. average diesel prices increased 8 percent over the past four weeks,” he said. Diesel futures on the New York Mercantile Exchange “are currently trading at their highest levels since July 2015.”

Stiles said growers in northeastern Arkansas were reporting transport loads of dyed diesel now trading at $2 a gallon and “with harvest getting in full swing, this adds some unexpected costs at the tail end of the crop year.”

Rebuilding and recovering from the two storms is expected to keep fuel prices propped and bring an increase in demand, but probably not prices, for Arkansas timber.

“Some in the energy trade argue that the hurricane damage will slow fuel demand in these big population centers around Houston and south Florida,” Stiles said. “That, I think is up for debate. The rebuilding effort that lies ahead will require a lot of fuel. The energy demand from construction and building materials may keep fuel prices supported for many months.”

“I would expect that for the next 24 months’ orders for lumber, plywood, and oriented strand board will increase to meet the rebuilding demand in both Florida and Texas,” he said. “Most of the increase for Arkansas wood will be related to Harvey.

“While this might increase prices for lumber, given the tremendous supply of standing timber, I do not foresee any increase in the value of payments to landowners,” Pelkki said.

Current data show that statewide in Texas, nearly 200,000 homes were damaged and another 100,000 affected by flood and wind damage.

Based on the 2,300-square-foot average size of a home in Houston and “if the number of damaged and affected homes results in 50 percent replacement, that would be 2.25 billion board feet of lumber and 2.1 billion square feet of plywood/oriented strand board,” Pelkki said.

“This would represent 13 percent of total lumber production in the southern United States based on production of 17.3 billion board feet of southern pine lumber in 2016,” he said.