By Fred Miller
U of A System Division of Agriculture
Sept. 12, 2017

FAYETTEVILLE, Ark. — Fruit and vegetable farms, gardens and other agricultural sectors rely on pollinators to ensure abundant production, but wild pollinator populations are in decline, said Dirk Philipp, associate professor of animal science for the University of Arkansas System Division of Agriculture. 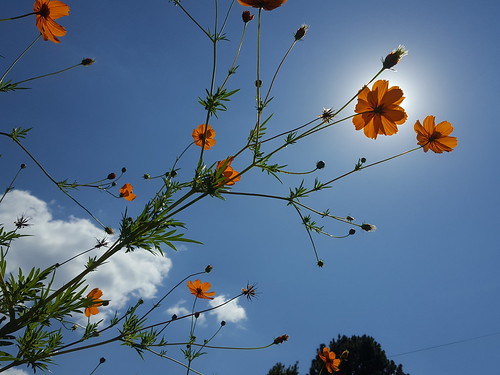 “The original prairies that covered much of the U.S., including parts of Arkansas, were species-rich,” Philipp said. Those species include many animals — bees, flies, butterflies, moths, beetles and other insects, as well as some birds, lizards and mammals — that move pollen in and among plants.

Pastures don’t rely heavily on pollinators, Philipp said, but they can make ideal places to locate plots of pollinator-friendly plants. Such habitats can encourage biodiversity that offers benefits to the environment, wildlife, and neighboring gardens and farms that may rely on pollinators for abundant production.

Pastures make good places for pollinator plots because they are generally low-input and pesticide use is limited, Philipp said. Although many pollinator-friendly plants are undesirable in pastures, many areas around the farm may be suitable.

Deliberately planting habitat grasses and flowers for pollinators can provide other benefits, Philipp said. Such plants can suppress weed growth and halt spreading into pastures from peripheral areas.

He said pollinator plots can be selected to complement existing habitats, such as ditches, fencerows and levees that offer nesting and foraging sites for pollinators.

“Leaving all or some of these areas alone can provide refuge for pollinators,” Philipp said. “Hedgerows and longer sections or patches of pollinator habitat will provide corridors for pollinator travel.”

Philipp also said some forage crops, such as clovers and alfalfa, could offer pollinator habitat or feeding grounds, though they normally are grazed or harvested before flowering. He suggests that small areas of some of these forages might be set aside and allowed to bloom.

Habitat and feeding grounds should not be farther apart than half a mile, Philipp said. “Ideally, only a few hundred yards should be between feeding and nesting sites for smaller native bee species,” he said.

Planting and maintaining a multitude of smaller pollinator plots around the farm helps keep those areas within reach of the insects.