Bracketed by distant hurricanes, Arkansas growers push on through harvest

By Ryan McGeeney
U of A System Division of Agriculture
Sept. 12, 2017

LITTLE ROCK – For growers in a landlocked state, Arkansas farmers are having to deal with the effects of a surprising number of weather events mostly taking place in the Atlantic Ocean. 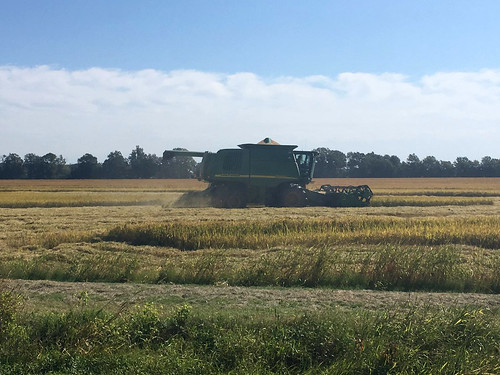 After having tried to speed the rice harvest ahead of bands of rain brought to the Southern Plains by Hurricane Harvey two weeks ago, Arkansas growers are once more trying to harvest as much of the crop as possible before echoes of Irma — downgraded from a hurricane to a tropical storm by the National Weather Service as of Monday afternoon — reach the Delta.

As of Sept. 3, Arkansas growers had only managed to harvest about 18 percent of all rice acreage in the state, according to the U.S. Department of Agriculture’s National Agricultural Statistics Service. As of Sept. 10, however, producers had managed to harvest 41 percent of the total acreage, according to NASS — leap-frogging ahead of the state’s five-year average for this point in time.

Richard Klerk, Woodruff County Cooperative Extension Service agricultural agent, said Monday that rice growers in his county were working to harvest as much rice as possible, despite less-than-ideal field conditions.

“Everybody’s in the fields, cutting,” Klerk said. “It’s muddy and it’s sloppy, but if they can get their equipment in there, they’re doing it.”

Woodruff was one of several counties in eastern Arkansas to see 10 or more inches of rain saturate farmland, making rice fields impassable and submerging tens of thousands of acres of soybeans for more than a week. Klerk said soybean fields in his county were now “pretty well drained,” but that irreversible damage to many plants was visible at the edges of many fields.

“At this point in the season, we’ve had about all the rain we need,” he said.

Jarrod Hardke, extension rice agronomist for the University of Arkansas System Division of Agriculture, said growers were not only wary of potential rain bands spanning out from Irma, but the winds that carry them as well.

“Wind gusts of 40-50 miles per hour are currently possible,” Hardke said. “With that potential, growers are harvesting any rice cultivars that are prone to lodging if the grain moisture is anywhere near low enough to harvest.”

Hardke said that many growers were contemplating the use of applying “harvest aids,” chemical technologies that speed the drying of rice plant canopies in order to make combine harvesting easier.

“We advise against this due to the risks associated with this gamble,” he said. “If more rain falls than is forecast or if lodging is extremely severe, then rice may not be harvestable within four or five days as is recommended and grain yield and milling yield losses could be great.”

Beyond Florida, Irma has now brought state-wide rains to Georgia, and has triggered high winds and severe weather warnings throughout Alabama, Tennessee, South Carolina and beyond.

Even if growers manage to avoid any additional crop damage from Hurricane Irma, they may still not be able to relax through harvest into November: According to the National Weather Service, Hurricane Jose, several hundred miles off the Florida Coast, is drifting westward.