By Ryan McGeeney
U of A System Division of Agriculture
Sept. 8, 2017

LITTLE ROCK – While Arkansans were spared the worst of the destruction wrought by Hurricane Harvey, many growers in the eastern portion of the state are nevertheless dealing with the storm’s impacts. 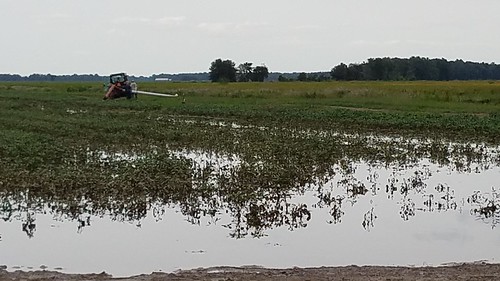 Bands of stormy weather spanning out from Hurricane Harvey in late August and early September dumped upwards of 10 inches of rainfall in some eastern Arkansas counties, impacting tens of thousands of acres of both rice and soybeans in the state.

Arkansas rice growers, already besieged by flooding in the spring, pushed to speed their harvest operations through the weekend of Aug. 25-27, said Jarrod Hardke, extension rice agronomist for the University of Arkansas System Division of Agriculture.

Hardke said initial concerns of rice lodging — in which the plant leans and then falls to the ground, saturated with water or beaten by wind — proved to be overstated.

“While the event was happening, a lot of that rice didn’t end up laying down as it looked like it was going to,” Hardke said. “It hasn’t triggered the drastic lodging we were concerned was going to happen.

“It’s a double-edged sword, though,” he said. “A lot of growers look at fields that don’t have much of any lodging, and that can be a bad sign to them in certain ways — if rice is holding a lot of grain, it should go down. If it’s not going down, there may not be as much actual rice on the plant.”

Throughout August, much of Arkansas experienced high humidity and atypically low temperatures, and the state’s rice crop was slow to dry out as a result. Ironically, water retention in rice often lends it rigidity, which may have helped much of the crop survive the battering stemming from Harvey, Hardke said. While initial estimates put the impact of lodging at 80,000 acres of rice throughout the state, Hardke said he now estimates the number is probably closer to 40,000 acres.

Soybean losses are expected to be considerably higher in several counties, however. Rick Wimberly, Cross County Cooperative Extension Service agricultural agent, said that while growers in his county suffered relatively little damage in rice, despite flooding, about 25,000 acres of soybeans have been submerged for more than a week.

“We had the potential for 60 bushels per acre or more on those acres, and for the most part, those are ruined,” Wimberly said. “At the most, they might make 30 bushles per acre. But I’m not going to bank on it.

“We’ll probably see a 75 percent loss in a lot of these fields — some of them worse,” he said.

“It’s too late for those soybeans. They’ve stood there for eight days with floodwaters in them. Any pods in that water are ruined or rotten.”

“We can’t get the water off the fields fast enough to give the plants a chance to recover,” Klerk said. “Where there was good drainage, or the rain wasn’t too heavy, the soybeans look pretty good. But those low areas have taken it on the chin, with all the rainfall.

“It’s just a slow process, trying to move all the water off a concentrated area after 10 inches of rain, to move it into ditches,” he said. “There are farmers pumping water over levees, to get it off the fields and into whatever kind of drainage they can.”

Jeremy Ross, extension soybean agronomist for the Division of Agriculture, said the rain and humid conditions have resulted in quality issues with many of the state’s April-planted soybeans, including shriveled and discolored beans. There are also considerable disease issues, including pod and stem blight.

“The fungicide application probably went out a little too early to really give us good control on some of these late-season diseases,” Ross said. “The yields are still pretty good, but the quality of some of these fields just isn’t where we thought it should be.

“The forecast for the next couple of weeks looks pretty favorable, thought, so we’re hoping to get out of these early-planted fields,” he said. “We think the quality will get a little better with May-planted beans.”