By Mary Hightower
U of A System Division of Agriculture
Oct. 30, 2017

ALMA, Ark. – Even after a couple of long days and a rainy four hours of interstate driving still ahead of him Friday, Taylor Gwin was a little tired, but stoked. A bit more than 12 hours earlier, the Bradley County 4-H team he coached became the first Arkansas winner of the livestock judging competition at the American Royal Livestock Show in Kansas City. 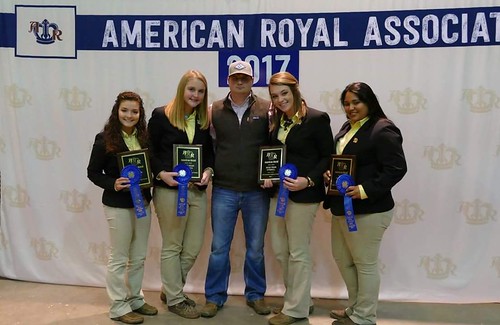 The American Royal, established in 1899 in a tent at the Kansas City stockyards, has grown into one of the most prestigious competitions on the livestock circuit. It is now an eight-week season that includes horse shows, barbecue contest and rodeo.

The Hermitage High School group dominated the field which had teams from 16 states, not only winning the overall title, but also winning first in swine, cattle and the “reasons” class, in which participants justify their placement of livestock, and taking fifth-place in sheep judging. Gwin teaches agriculture at Hermitage High and is also a county 4-H volunteer.

Gwin works the team hard and the team is tested in competition often.

“We’ve traveled a lot this year and have done judging contests in Oklahoma and all over,” he said.

I’m thankful to these kids for buying into my coaching and wanting to be successful,” Gwin said. “We have a pretty good group of kids.”

Gwin is no stranger to the 4-H Youth Development program. He was a 4-H member too, winning a state 4-H livestock contest while in ninth grade. Livestock judging may sound somewhat esoteric, but it requires skills that will translate into other areas of life.

Next year will be a building year for Gwin, as two of his team members head to college in 2018.

For more information about 4-H, contact your county extension office or visit www.uaex.uada.edu.