Invasive species of stink bug working its way into Arkansas

(Newsrooms – with downloadable at www.flickr.com/photos/uacescomm/37921438402 )
(Download this story in MS Word format here.)

FAYETTEVILLE, Ark. — A stinky, invasive species of bug that has found a new home in the U.S., is slowly working its way into Arkansas. 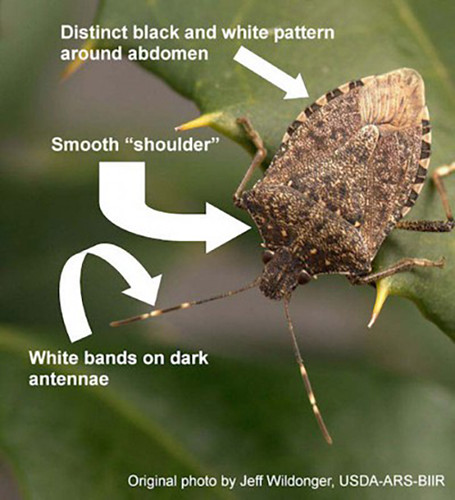 The brown marmorated stink bug uses its piercing mouthparts to suck plant juices from fruits, seedpods and nuts on a wide variety of wild and cultivated plants. It its early developmental stages, the bug feeds on important fruit, vegetable and ornamental crops, and is also found in corn, soybeans and possibly cotton.

The BMSB has the potential to do the same in Arkansas, said Donn Johnson, University of Arkansas System Division of Agriculture professor of entomology.

Little is known about where BMSB occurs in Arkansas. The first verified specimen was captured in 2013 in Washington County. In mid-summer and fall of 2017, several more were collected from a house in Fayetteville. Six brown marmorated stink bugs were captured at the University of Arkansas Agricultural Research and Extension Center in Fayetteville.

In August, sticky vertical panel traps baited to attract and capture BMSBs were placed in fruit orchards in four Arkansas counties, including Benton, Hempstead, Johnson and Washington. So far, the stinkbugs have only been found in Washington County.

What researchers do know is that In the fall, adult BMSBs seek shelter for the winter in south-facing rocky outcroppings and in the walls of manmade structures and buildings. In eastern states where this pest is established, more than 25,000 bugs have been reported to be living in a single home over the winter. BMSBs do not nest or reproduce in homes and will attempt to find their way out again when spring returns.

“They’re a nuisance,” said Johnson, who has found three on his northwest Arkansas house already.

Johnson said that the typical pattern of the BMSB is in the next several years, they feed and reproduce outside on a variety of susceptible crop plants and increase to levels that will be damaging to these crops.

The BMSB spreads by “hitchhiking,” catching a ride on trucks and other vehicles delivering goods across the country.

Scientists across the country are trying to track the insect’s progress and are asking for help from the public. Other states have enlisted citizens to help report BMSBs, and for the U.S. Department of Agriculture Animal and Plant Health Inspection Service and Extension personnel to confirm that brown marmorated stink bugs were established in a county.

The University of Arkansas System Division of Agriculture is asking Arkansas residents to report and submit specimens suspected to be brown marmorated stink bugs. These reports will help researchers gain valuable insights into where this pest occurs in Arkansas.

“It helps locate where populations are growing across the state,” Johnson said.

How do I identify the BMSB?

The BMSB is about a half-inch long and has a shield shape to it that is characteristic of stink bugs. It looks like many other species of stinkbugs, but it’s markings and smooth shoulder set it apart. They have a distinctive dark and light banding outlining the abdomen. Its dark antennae and legs also have white bands.

Who should report seeing BMSB?

To report a sighting of BMSB, go to the Early Detection and Distribution Mapping System called EDDMapS (See: http://www.eddmaps.org/ ) and follow the instructions for registering as an EDDMapS user and submitting a report.

Submitting a report is free and you will only have to register as a user once. Sightings can also be reported by installing the free smartphone app called SEEDN, or “Southeast Early Detection Network (See: https://apps.bugwood.org/apps/seedn/  ).” Users can submit up to five photographs if they are uncertain if what they are seeing is a BMSB. With every image, please add a descriptive caption with the pest’s name and the photographer’s name. By taking a few minutes of your time and reporting sightings of this pest, you will be helping neighbors and growers in your area prepare for this pest by identifying potential new hotspots.

If you have trouble registering with EDDMapS and would like to report a sighting, email Dr. Donn Johnson at dtjohnso@uark.edu with your name, address (or nearest crossroads), the date you saw the suspected BMSB, how many you have seen and a photograph of the insect. You can hold suspect insects in freezer for several days, then place these dead specimen(s) in baggie and mail to:

For information on how to identify a BMSB or to prevent entry or to get rid of this pest in your home, see this tip sheet, http://msue.anr.msu.edu/uploads/files/AABI/bmsbtipsheet.pdf.