Where rice fields go, the geese are sure to follow

By Ryan McGeeney
U of A System Division of Agriculture
Oct. 26, 2017

MONTICELLO, Ark. – The western edge of the Mississippi Delta, which contributes so richly to Arkansas agriculture, is well known as a prime area for hunters, with both wet marshes and flooded rice fields after the fall. But it hasn’t always necessarily been so. 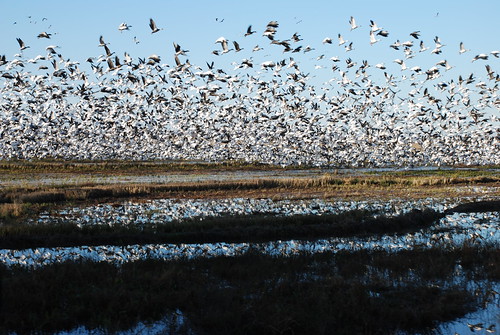 Until about the early 1990’s, the migration patterns of Arctic geese — migrating over North America through the fall and into the winter — were dominated not by the Delta, but by the rich, rice-dominated farmland of East Texas and Louisiana. But as drought took hold in the South and water rights issues left growers in those areas with little choice but to move into other, less water-intensive crops, mid-continent migration patterns gradually gravitated toward eastern Arkansas.

Which raises more than a few questions.

Douglass Osborne, associate professor at the University of Arkansas at Monticello, has been leading a research team studying not only how the shift occurred, but what some of the potential adverse implications may be, as well.

“Right now, we’re in the relatively early stages of using satellite telemetry technology to learn about the distribution of the geese on the landscape.” Osborne said. “Aerial surveys are conducted during the winter, and anecdotally, we know that there’s more geese wintering in Arkansas than ever before. We’re using transmitters to understand migration patterns and winter distribution.”

Osborne and his team have about 40 years’ worth of data to work with, much of it from band and encounter data, supplied from hunters on occasions when banded birds were harvested during a hunt.

“Analyzing that data, we see that the initial shift in distribution, from Texas-Louisiana into Arkansas, occurred in the 90’s. In the early 2000’s, we see a really dramatic shift into the Arkansas Delta,” he said. At the same time so many Texas and Louisiana growers were shifting from rice to cotton, Arkansas rice growers realized that by reflooding their fields after harvest, they could in turn make a profit leasing the land to bird hunters for the season.

Osborne said the data reflect three distinct time periods over the past four decades, including a historical wintering distribution of migrating arctic geese, a transient distribution in the mid- to late-90’s, as the birds “began to dabble in Arkansas,” and the current distribution, in which the birds have essentially traded their coastal layovers for the Delta.

“Historically, these birds were migrating from the arctic tundra in the summer, through the mid-continent and toward the Gulf of Mexico, hanging out in freshwater coastal marshes, feeding on plant material in the marsh, digging up the root tubers, then bouncing out of the marsh into the surrounding agriculture,” Osborne said. “But the conversion of agriculture toward cotton in the mid-1990’s in that part of the world took water off the landscape—water that was necessary for these birds in winter.

While the increasing artic goose population may be a boon to both landowners and hunters, Osborne said there are other, long-term factors to consider.

“It’s worth asking: What is the role of these geese in the agricultural system itself,” Osborne said. “What’s their role in nutrient distribution, and seed dispersal of different weeds? Are these geese environmental pests, or do they help agriculture?

“There’s also potential impacts for other waterfowl, that historically always wintered here,” he said. “There’s upwards of 3 million white-fronted geese in the population, and 10-20 million snow geese in the population — so now that a large portion of the distribution of birds has shifted into Arkansas, what does that mean for the amount of food on the landscape, which other birds always wintered here rely on?”

Osborne said that because hunting is such a strong engine in the Arkansas economy, it behooves the state and its residents to consider such implications, including effects on the populations and reproduction of other birds competing for scarce resources.

Osborne said his research, which began about three years ago, could easily take a career’s worth of time.

“You attempt to answer one question, and it leads to about four more questions,” he said.

While his research to this point has been supported through the University of Arkansas System Division of Agriculture, Ducks Unlimited, the Canadian Wildlife Services and Environment Canada, Osborne said his team is hoping to attract underwriters for continuing research.

“Overall, the waterfowl community thinks there’s too many geese on the landscape — but what does ‘too many geese’ mean, and what impacts are they having on agricultural production in the southern portion of the range?” Osborne said. “This whole topic is a relatively unexplored area right now. There’s lots to learn about what impacts these geese may have here in the South.”

To learn about waterfowl in Arkansas, contact your local Cooperative Extension Service agent or visit www.uaex.uada.edu.