Revision of torrent mites of the United States and Canada available online:
https://zookeys.pensoft.net/article/13261/element/8/15170/ 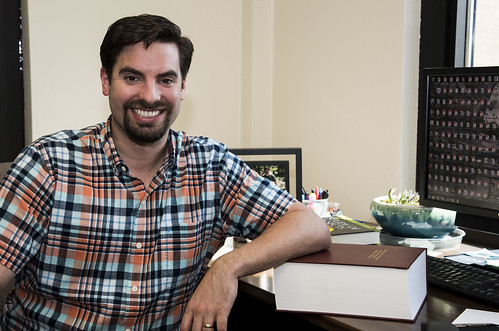 That’s how long it took Ashley Dowling, associate professor of entomology for the University of Arkansas System Division of Agriculture to talk Fisher into taking on mites for his Ph.D. research.

Mites are tiny, often microscopic arachnids related to spiders and scorpions and found everywhere in the world in an unimaginable diversity of species.

Fisher’s change of heart began a journey of discovery that led to a 673-page dissertation in which he describes 63 species of water mites.

After completing his dissertation, but before it was published, Fisher found 27 more species, which were added before printing. The completed monograph, Revision of torrent mites (Parasitengona, Torrenticolidae, Torrenticola) of the United States and Canada, describes 90 water mites, including 66 new species, in just one genus.

Fisher characterizes the resulting bound publication as “ridiculous” in size. It’s so big, in fact, that Fisher’s wife, Danielle, once used it as a booster seat when she needed extra height to use a microscope.

The Trenches of Discovery

Fisher earned his master’s degree in entomology at the University of Kentucky, where he conducted research on parasitic wasps.

While at Kentucky, Fisher became friends with Dowling, who was a post-doctoral research associate there. Dowling joined the Division of Agriculture and the Dale Bumpers College of Agricultural, Food and Life Sciences in 2008. He specializes in systematics, the study of biodiversity and the evolutionary relationships between groups of organisms. He focuses on water mites as indicators of stream health and biodiversity.

Fisher followed Dowling to the U of A to work on his Ph.D. He said Dowling suggested he work on mites for his doctoral dissertation research.

Dowling made the case that mites are ubiquitous, found living on or in virtually all other living creatures, including humans, and are a fundamental indicator of biodiversity in an ecosystem. He also pointed out that few active experts on mites remain. Fisher said the last active water mite taxonomist in North America, Ian Smith of the Canadian National Collection in Ottowa, just retired.

The field is open for a new generation of rising experts.

But what changed Fisher’s mind was the abundance of stories about mites that illustrate what is known and unknown about them. A good mite story for the Halloween season: mites that live in human skin may be senstitive to REM sleep. During that deep sleep, they come out through the pores and mate.

The enormous task of identifying and describing torrent mites began when Dowling received a National Science Foundation Partnerships for Enhancing Expertise in Taxonomy Grant. The NSG grants were aimed, in part, at developing that new generation of experts in classification of organisms, also known as systematics.

The grant provided funding and direction for what became Fisher’s doctoral dissertation. He enlisted a team that included his co-authors and began with specimen collections and partial descriptions from earlier taxonomists, including Ian Smith’s.

Fisher and his team mounted four expeditions to collect specimens from the U.S. and Canada. The mites were identified, classified and described by observation, dissection and DNA analysis. They developed more precise descriptions of known species and began to discover and describe new ones.

One of the fun parts of discovering new species, Fisher said, is that he got to name them.

“After I ran out of names of people I knew,” Fisher said, “I got to have some fun.”

One mite had coloration that resembled a red glow over a horizon. Fisher named it Torrenticola solisorta in honor of a sunrise. Another had a reddish “eye” spot on a dark gray background that reminded him of the giant robot in the classic sci-fi movie “The Day the Earth Stood Still.” He dubbed it Torrenticola gorti.

Fisher said the team found many species that are endemic to Arkansas and nowhere else. He also found that water mites in Arkansas have a surprisingly greater abundance and diversity of colorful patterns compared to other areas of North America. “And we don’t know why,” he said.

Fisher can only speculate that the coloration serves as camouflage against predators that are exclusive to Arkansas, or may be caused by a unique combination of minerals in the water.

The descriptions in Fisher’s monogram form the foundation for advanced research. Dowling, for example, is pioneering research on the role of water mites in stream ecosystems. His work shows the health of water mite populations can serve as a sensitive indicator of a stream’s health and biodiversity.

Their sensitivity to changes in water quality makes mites better bio-indicators of stream health than other organisms, Fisher said, and they provide a better and more cost effective measure than costly and time-consuming chemical tests.

“A chemical test is only a snapshot of what was present in one spot on a single day,” Fisher said. “The health of a water mite population could offer a longer term historical picture of how water quality may be changing.”

Water mites are also important to humans because their larvae parasitze many adult flies, especially those that have aquatic larva. That includes mosquitoes.

Fisher stressed that what entomologists don’t know about mites is greater than what they do know. The colossal size and diversity of mite populations in the world and their impact for good or bad on the earth and human quality of life is largely undiscovered.

Taxonomic works like Fisher’s dissertation lay the groundwork for those discoveries.