By Mary Hightower
U of A System Division of Agriculture
Nov. 16, 2017

FAYETTEVILLE, Ark. – Twenty years ago, people from the poultry industry sat down in an office in Springdale, Arkansas, for a talking session on USDA implementing HACCP into meat and poultry inspection, a regulatory change that would revolutionize how America’s meat and poultry processing system worked. 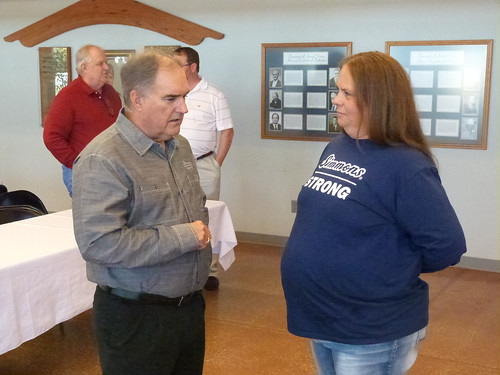 HACCP stands for hazard analysis and critical control points, a systematic and preventative approach to food safety. It had its roots in the space program of the 1960s, when NASA wanted to be sure the food brought aboard its ships wouldn’t poison the astronauts.

HACCP wasn’t a simple change and it was more than making physical adjustments in plants and educating its workers. As often happens when words meet the working reality, HACCP regulations were subject to interpretation in situations that were unique to a particular location or plant.

In November 1997, industry reps from Arkansas, Louisiana and Oklahoma gathered at the Pauline Whitaker Animal Science Center, a location just a few miles from the Food Safety Inspection Service district office in Springdale at the invitation of John Marcy, extension poultry processing specialist. There, the discussion of HACCP began. As industry talked about its concerns and queries, Marcy and Frank Jones, then associate director of the Center of Excellence for Poultry Science, would then bring industry concerns and questions to FSIS.

In those early days, the going was kind of rough.

“Frank and I would just pose questions to the regulators,” Marcy said. “There was no direct conflict between industry and regulators.

“This was a safe feedback circuit,” he said. “It’s a learning experience and a place to share experiences.”

It started off kind of tense, then it got collaborative. Laid back. Easy going,” Stillwell said. “Once we got all the disagreements over interpretation out of the way, we got to work with each other to make further improvements, rather than what to do to keep the plants from shutting down.”

As years went on, the makeup of the people attending the roundtable changed along with their jobs. The roundtable itself evolved along informal lines. There are no minutes and no “gotcha” moments.

“I buy lunch and we socialize,” Marcy said. “That’s where the real communication takes place. There’s a lot more give and take and people get to know each other in a non-crisis situation.”

The roundtable became so popular that “we had people coming from El Dorado, Oklahoma, Missouri, Mississippi and Texas. We had some folks coming in from Tennessee. Oftentimes, we would bring in one of the senior FSIS folks in town for meetings,” Stillwell said.

Location had a part to play in the roundtable’s success.

“It’s definitely helpful that the U.S.D.A. Springdale District Office is so close to the location where we have the roundtable,” said Tina Rendon, who began attending the meetings in 2000 from Texas even though most of Pilgrim’s Pride Corporation facilities were outside the FSIS’s Springdale district. “Plus, the perseverance of the person who’s hosting it – Dr. Marcy – for having done it for so many years. That helps tremendously.”

Stillwell agreed about Marcy’s role: “He’s been a stable influence, a passionate influence, and he’s really been the glue that’s held it all together.”

Paul Kiecker joined the roundtable as FSIS district director in Springdale. He is now FSIS acting administrator in Washington D.C.

“I appreciate what the HACCP Roundtable is able to accomplish. It continues to yield positive results for both industry understanding and implementation of HACCP,” Kiecker said. “The guidance on developing HACCP plans and the training that is offered is invaluable. The HACCP Roundtable is a prime example of an industry, academia and government partnership is positively impacting public health.”

For more information about the roundtable, contact John Marcy at (479) 575-2211or jmarcy@uark.edu.