STUTTGART, Ark. – Following harvest season, it’s not uncommon to see plumes of smoke rising in the flatness of the Arkansas Delta. Many of the fires are intentional with the flames used as a production practice by rice and other crop producers, said Jarrod Hardke, extension rice agronomist for the University of Arkansas System Division of Agriculture. 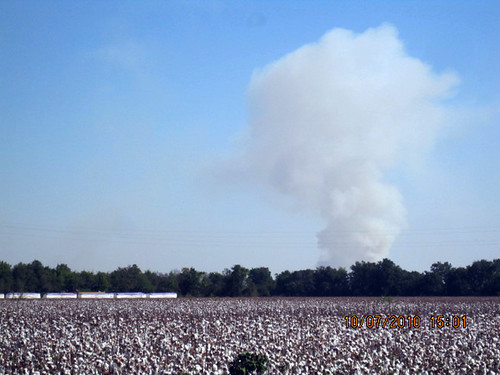 “Contrary to many beliefs out there, burning of crop residue is a recommended crop management practice,” Hardke said.

Because crop residue can serve as an effective wintertime shelter for insects, weeds and disease, “there is a need to burn crop residue as a means of pest management,” he said. “In addition, hard-to-control weed species can be eliminated by burning residue. This practice is another tool in the toolbox for growers to effectively manage their farms.”

Burning is used by rice, wheat, soybean and corn growers. Rice growers use it the most, with about 25 percent of Arkansas rice fields being burned. Fire isn’t always necessary, but it’s especially helpful in rice to manage problematic residue.

“Rice residue can be slow to break down,” Hardke said. “To prepare the field for the next season, it can be very beneficial to remove residue by burning, because tillage alone is not always sufficient to remove it for fall field preparation.”

Waiting on the residue to break down over winter can be a gamble. Winter conditions can slow breakdown and result in increased tillage and delayed planting, resulting in increased production costs and lowered yields in some cases. In fields that cannot rotate to crops other than rice, excessive remaining residue in the field can be detrimental to the establishment of the next rice crop.

There are many factors that can affect a burn and the amount of smoke it produces, including the length of time and weather conditions since harvest and the way the residue has been managed with tillage equipment. In many rice fields only 30-40 percent of residue — mostly loose straw — may be burned. Where the residue has been laid flat to the soil, about 80 percent may be burned. The amount of moisture or still-green matter left in plant residue can impact the amount of smoke produced from a burn.

Burning in crop fields can mimic what nature does to prairie land and other ecosystems, Hardke said.

“If we weren’t here and this was all still prairie, it would burn and regrow every few years,” he said. “Fire is nature’s way of reducing residue in some systems and we can continue to use it to our advantage.”

However, burning is not a necessity in every case.

“Nutrients are tied up in residue and some of these can be lost if residue is burned,” Hardke said. “So, where there is not a definable benefit for burning, it’s advised to avoid the practice.”

Residue burning has attracted criticism because of its potential effects on air quality. There are online petitions seeking to end the practice of burning, and when smoky haze appears around cities and communities, speculation in social media often points to rice fields.

“To be clear, there are many sources of haze and even low-lying smoke during different parts of the year,” Hardke said. “In production agriculture, most farmers make a legitimate effort not to affect any neighbor when they need to burn a field. However, winds change and inversion conditions can set in without warning. These are not excuses, just acknowledgement that sometimes even the best intentions can be overturned by unpredictable conditions.”

Hardke also said that while research and extension can improve practices and timing over time, farmers still need to be able to burn crop residue to effectively manage their land in many situations.

“We need to work together on solutions in this and many other agricultural matters today,” he said.