U of A System Division of Agriculture puts preliminary crop flood damage at $64.5 million
skip to main content
News - 2017

U of A System Division of Agriculture puts preliminary crop flood damage at $64.5 million

(Download a MS Word version of this story here.)

STUTTGART, Ark. – With flooding and other storm effects battering some 937,000 acres of Arkansas cropland, losses to farmers could hit $64.5 million, according to a preliminary estimate released Thursday by the University of Arkansas System Division of Agriculture. 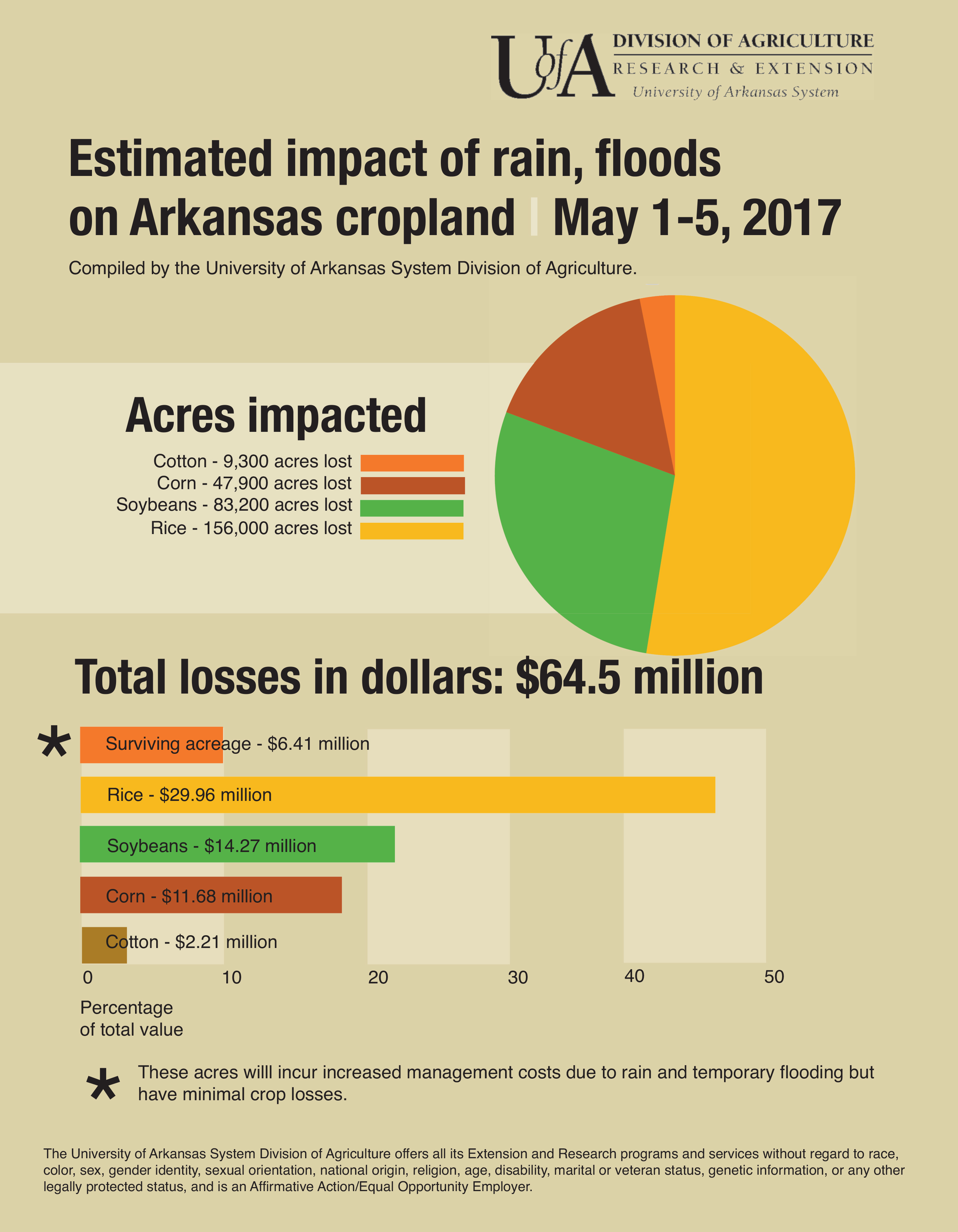 ESTIMATE  -- Estimate of acres impacted and dollar losses associated with storms in late April. (U of A System Division of Agriculture graphic)

“If those numbers scare you, you should be terrified,” said Jarrod Hardke, extension rice agronomist for the University of Arkansas System Division of Agriculture. “I’m being conservative. There’s no sugar-coating it.”

The weather has struck Arkansas agriculture with some heavy blows in the last decade; row crop farmers suffering an estimated $40-$50 million loss last year due to heavy rain; beef cattle producers endured a $128 million loss from drought in 2012; and farmers were hit with an estimated $335 million in losses in 2011 from flooding that mirrored this year’s.

Thursday’s estimate was compiled by Hardke from a survey of extension agents and agronomists this week. Among the factors taken into account: the costs of seed and herbicides already applied, equipment and labor. It does not include the impact of the flooding and high winds to poultry facilities in the northeastern part of the state or farm structures, grain or feed storage or other structures.

There was a glimmer of hope: of the 937,000 affected acres, the crops on 641,300 acres were expected to survive – if no more rain falls. Of the crops affected, rice was the hardest hit. Eighty-nine percent of the state’s anticipated 1.2-million-acre crop had been planted, according to Monday’s National Agricultural Statistics Service report. Seventy-one percent of planted rice had emerged.

“I’m estimating 156,000 acres of rice were lost,” Hardke said. “I don’t mean prevented planting, I mean acres lost that have already been planted.” 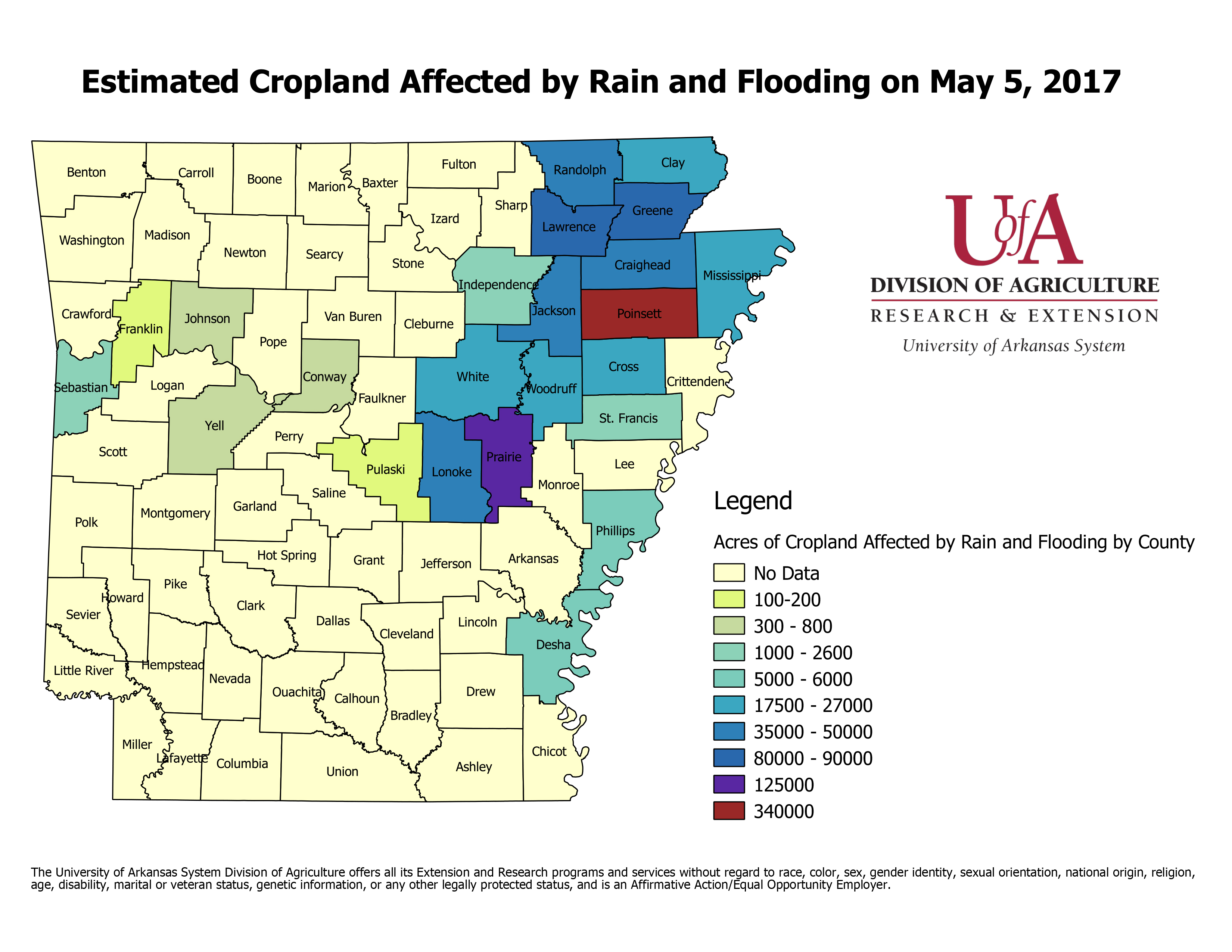 Estimated cropland affected by rain, flooding. (U of A System Division of Agriculture image by Vic Ford)

Sunday marks a week since the deadly storm system raked the state.

“We’re knocking on a 10-day window,” Hardke said. “Anything that’s still covered in water at the end of next week is a loss, and farmers need to make preparations for it to be gone and be ready to take action whenever it dries.

“If it’s still wet at the end of next week, it’ll be June before it will be dry enough to replant,” he said.

Hardke said some producers who weathered the 2011 floods were lucky enough to have a good survival rate in their rice.

“Those are the exceptions,” he said. “It depends on the temperature of the air, the water temperature, whether the water is muddy or clear, or moving or stagnant.”

If there’s one helpful quality, it’s that this week’s temperatures were relatively cool.

“Being cool, it’s good,” Hardke aid. “If the water gets warm and stagnant, you’re going to see that crop go out a lot faster.”

The April 28-30 storms spawned tornadoes in Boone, Drew, White, Woodruff and Lonoke counties. Some areas in Arkansas saw more than 10 inches of rain during the weekend, prompting flash flood warnings across the state. Flood warnings were still in place Thursday along the Black, White, Arkansas, Ouachita and Mississippi Rivers. Major flooding was reported along the Black and White Rivers in northeastern Arkansas where the majority of the crop damage has occurred.