By Ryan McGeeney
U of A System Division of Agriculture
May 30, 2017

(389 words)
(Download the MS Word version of this story here.)

LITTLE ROCK – Twenty-three counties in Arkansas have been declared disaster areas by the U.S. Department of of Agriculture, making growers and other property owners in those counties eligible to apply for emergency loans through the USDA’s Farm Service Agency. 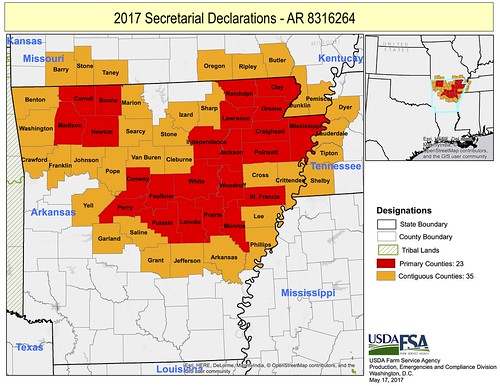 The declaration was issued May 24 by U.S. Secretary of Agriculture Sonny Perdue, and was announced May 26 by Arkansas Governor Asa Hutchinson. According to a letter addressed to the governor from Perdue, the acting Arkansas State Executive Director of the FSA requested the primary designation for the 23 counties on May 10 and May 18.

A statement from the governor’s office noted that the declaration from the USDA is distinct from a Presidential Disaster Declaration, which requires the Federal Emergency Management Agency to complete their own damage assessments.

Assessments from economists, agronomists and other experts with the University of Arkansas System Division of Agriculture estimated the impact of rain and flooding between May 8-12 on Arkansas cropland at approximately $175 million in losses, affecting about 360,000 acres. Extension personnel will continue to revisit those assessments as floodwaters gradually recede and individuals are better able to assess damage to roads, levees, irrigation pumps and other equipment that have been submerged or saturated for several weeks.

Eric Wailes, Distinguished Professor of Agricultural Economics and Business, said Cooperative Extension Service agents throughout the state will continue to help growers assess damage to their fields, crops and equipment so that they can be better equipped to seek financial assistance from FSA if they so desire.

A map of the included counties can be found here.