Number of active cotton gins in Arkansas on the rise

JONESBORO, Ark. – While the number of cotton gins has broadly declined in Arkansas since 2000, the number of active gins increased by five in 2016 to 31, said Scott Stiles, extension economist for the University of Arkansas System Division of Agriculture.

The National Agricultural Statistics Service issued an annual report on gins on Wednesday. 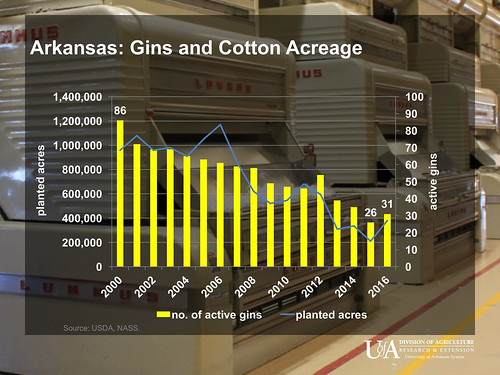 U of Arkansas System Division of Agriculture image by Scott Stiles.

Craighead and St. Francis counties each had two additional gins operating in 2016 and Phillips County added one, where it had none operating the previous year.

“The number of active gins has steadily declined over the years in response to many factors such as the construction of newer, higher-capacity gins, module storage, and particularly shifts in crop acreage,” Stiles said.

Bill Robertson, extension cotton agronomist for the University of Arkansas System Division of Agriculture, said that in the “last couple of years, most gins had been trying to hang on as best they could.

“The economics of the ginning business no different than any other business,” he said. “You’ve got to become more efficient to survive. We’re seeing the numbers of smaller and less efficient gins going down.”

“With the acres and production increases we’re seeing this year, some gins are looking to invest in equipment to improve speed and efficiency,” Robertson said. “Hopefully this will keep the snowball rolling downhill and growing to see continued improvement in the cotton industry.”

Wednesday provided good news to cotton in Arkansas, as Gov. Hutchinson announced plans by Shandong Ruyi Technology Group to hire up to 800 workers at a plant in Forrest City that will process more than 200,000 tons of Arkansas cotton a year into yarn.

“We hope that this company will provide another boost to cotton in Arkansas,” Robertson said.

“This is likely the result of gin consolidation as the number of gins processing 20,000 bales or less fell by four last year,” he said. “Another factor could have been increasing cotton acreage in 2016 and the resulting higher volume, which likely created an incentive for some higher capacity tins to re-open after being closed the previous year.”

If there is one dark cloud in this brightening picture, it’s the downward movement of cotton seed prices.

“Over the past year, per-ton seed prices have declined roughly $100 to the current level of $175 per ton,” Stiles said. “Lower seed prices mean less revenue for gins. This may become consideration in whether or not a gin operates in 2017.

For more information about the economic of agriculture, visit https://www.uaex.uada.edu/farm-ranch/economics-marketing.