By Ryan MCGeeney
U of A System Division of Agriculture
May 10, 2017

LITTLE ROCK – As the record flooding that struck northeast Arkansas less than two weeks ago has begun to crest and gradually recede in some affected areas, many growers and agricultural industry experts are waiting to learn what can be salvaged of the remaining planting season. 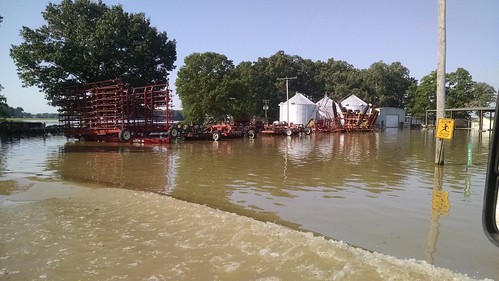 Jarrod Hardke, extension rice agronomist with the University of Arkansas System Division of Agriculture, said many will face a definitive “fork in the road” as soon as they can truly eye their soil.

“Each field that comes out from under the flood is going to be a new adventure — every single one,” Hardke said. “Some of them may be OK. Some of them, there’s going to be a huge amount of debris left; others, there will be less soil than they started with.”

Due to a requirement of many crop loss insurance policies under the 2014 Farm Bill, growers who are able to replant over a lost crop must do so until the final planting date in order to remain eligible to receive the insurance payout for which they have paid premiums. For rice growers in Arkansas, that date is June 9.

This will likely put many rice growers in the unenviable position of planting less-favored, ostensibly lower-yielding varieties at a point in the growing cycle when they are already facing significantly reduced yield potential.

“Our best options for planting rice are typically still our best options planted late,” Hardke said. “The best option you’re going to get for this replant, probably late May, early June at best, is going to be like your fifth choice, maybe your sixth choice on the list.”

“Even if we lose 10-15 percent of our acres, this rice market, worldwide, isn’t short. It’s just not going to be economical to replant. The corps of engineers have told several of our growers that it will likely be the end of May, first week of June, before some of this water is actually gone.”

In Poinsett County, where an estimated 340,000 acres of crop land was flooded earlier this month, Cooperative Extension Service agent Craig Allen said many rice levees will need to be rebuilt.

You can’t always get what you want

Hardke said that while seed suppliers to whom he’d spoken said rice seed was still available, they may not be prepared for the worst case scenarios that still remain possible.

“If we truly needed to replant 200,000 acres of rice, I don’t believe that seed is there,” he said, “even exhausting the ‘down the list’ options.”

Nevertheless, he advised that while some fields will ultimately prove unworkable for the 2017 planting season, many will likely be intact for replanting, and that growers will need to begin procuring the seed they need.

Jim Bigger, president of the Arkansas Seed Dealers Association, said that most rice seed is purchased by retailers in January or February in a typical year, and sold to growers in late March or early April, as the optimum planting window for rice in Arkansas first opens.

“Growers purchase most of it as it’s going to the field,” Bigger said. “Rice is notorious for that.”

This year, the available hybrid rice seed sold out at most locations, Bigger said, although varieties were still available.

Bigger said that 50 lb. units of conventional rice typically sold this year for $10-$15 each, and that most Arkansas growers used it at a rate of about 75-80 lbs. per acre. Hybrid seed, while more expensive per unit, typically seeds a field at a rate of 20-25 lbs. per acre, he said.

Bigger said that the conversation level between wholesalers and resellers had been “extremely quiet” in the approximately 10 days since massive flooding began swamping the farmlands of northeast Arkansas, but that chatter would most likely pick back up once water begins receding from more fields.

“In this area, we’re weeks away from being able to do anything,” said Bigger, who is located in Cash, Ark. “I couldn’t say how long it’s going to take the river to get off of some of these fields.”

As with rice, so with beans

Arkansas growers planned to plant approximately 3.5 million acres of soybeans this year, according to data from the U.S. Department of Agriculture’s National Agricultural Statistics Service. Jeremy Ross, extension soybean agronomist with the University of Arkansas System Division of Agriculture, said that number falls in line with general, year-to-year expectation for the state.

Ross said that soybeans are likely the crop least-affected by flooding in the state, simply because the disaster occurred so early in the soybean planting window.

“A lot of the seed is still in the bag,” Ross said. “And overall availability is just fine. Growers looking to replant may not get their first choice of varieties, but they should be able to find seed to plant.”

But, just as with rice seed, growers hoping to replant in soybeans will need to manage expectations, Ross said.

“You may have to dip down into your second, third, even fourth option on varieties,” he said.