By Ryan McGeeney
U of A System Division of Agriculture
May 10, 2017

LITTLE ROCK – The Arkansas State Plant Board has confirmed the presence of the emerald ash borer, an invasive beetle that attacks and kills ash trees, in Montgomery, Pike and Garland counties. 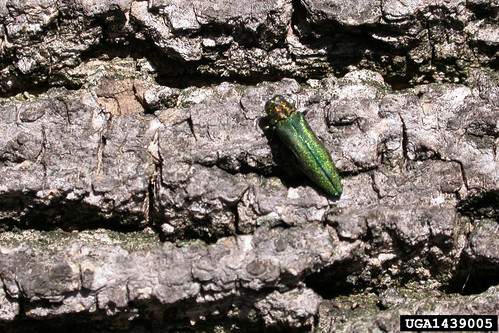 All three counties were previously part of a 33-county quarantine zone, which included counties in which the beetle had been confirmed as well as surrounding counties. Those counties include Fulton, Sharp, Lawrence, Greene and Clay counties in the northeast, and Pulaski, Perry, Howard, Sevier, Little River, Miller, Ashley, Drew, Lincoln, Jefferson and Grant counties in the central and south portions of the state.

The beetle, native to Asia, was first confirmed in southwest Arkansas in 2014. The pest typically begins emerging in Arkansas in April. The quarantine area is not being expanded at this time, according to information from the Arkansas Agriculture Department.

Tamara Walkingstick, associate director of the Arkansas Forest Resource Center and associate professor of Forestry for the University of Arkansas System Division of Agriculture, said it was unsurprising that the beetle had been confirmed in Montgomery, Pike and Garland counties, because they were already part of the quarantine zone.

“Most homeowners and landowners in Arkansas never see the actual beetle itself,” Walkingstick said. “They typically see the damage it has done.”

Jon Barry, extension forester and assistant professor with the Division of Agriculture, said there are several visible signs homeowners should look for if they suspect they might have an infestation on their property. Signs of infestation include:

In September 2014, the Arkansas State Plant Board established an initial quarantine zone in an effort to halt or slow the spread of the beetle. It is illegal to transport certain items from within the quarantine zones to areas outside the zones. According to the Arkansas Department of Agriculture, quarantined items include firewood of any hardwood species, as well as ash tree products including:

In 2015, the Arkansas State Plant Board began deploying several species of parasitoid wasps in some areas where the emerald ash borer had been confirmed. The use of the wasps was meant to control the beetle population, as the wasps destroy the beetle larvae in several ways. Researchers said it typically takes about three years to establish a wasp colony.

For more information about the emerald ash borer, visit https://www.uaex.uada.edu/environment-nature/ar-invasives/invasive-insects/emerald-ash-borer.aspx, www.emeraldashborer.info or www.arinvasives.org.  A fact sheet about the beetle can be downloaded at www.uaex.uada.edu/publications/pdf/FSA-7066.pdf.

To learn more about treatment options for homeowners who suspect they may have an emerald ash borer infestation, contact your local county extension agent, or visit http://www.uaex.uada.edu/.